The trouble with coronavirus death tolls

Daily mortality figures don’t reflect the true numbers, which are likely much higher. 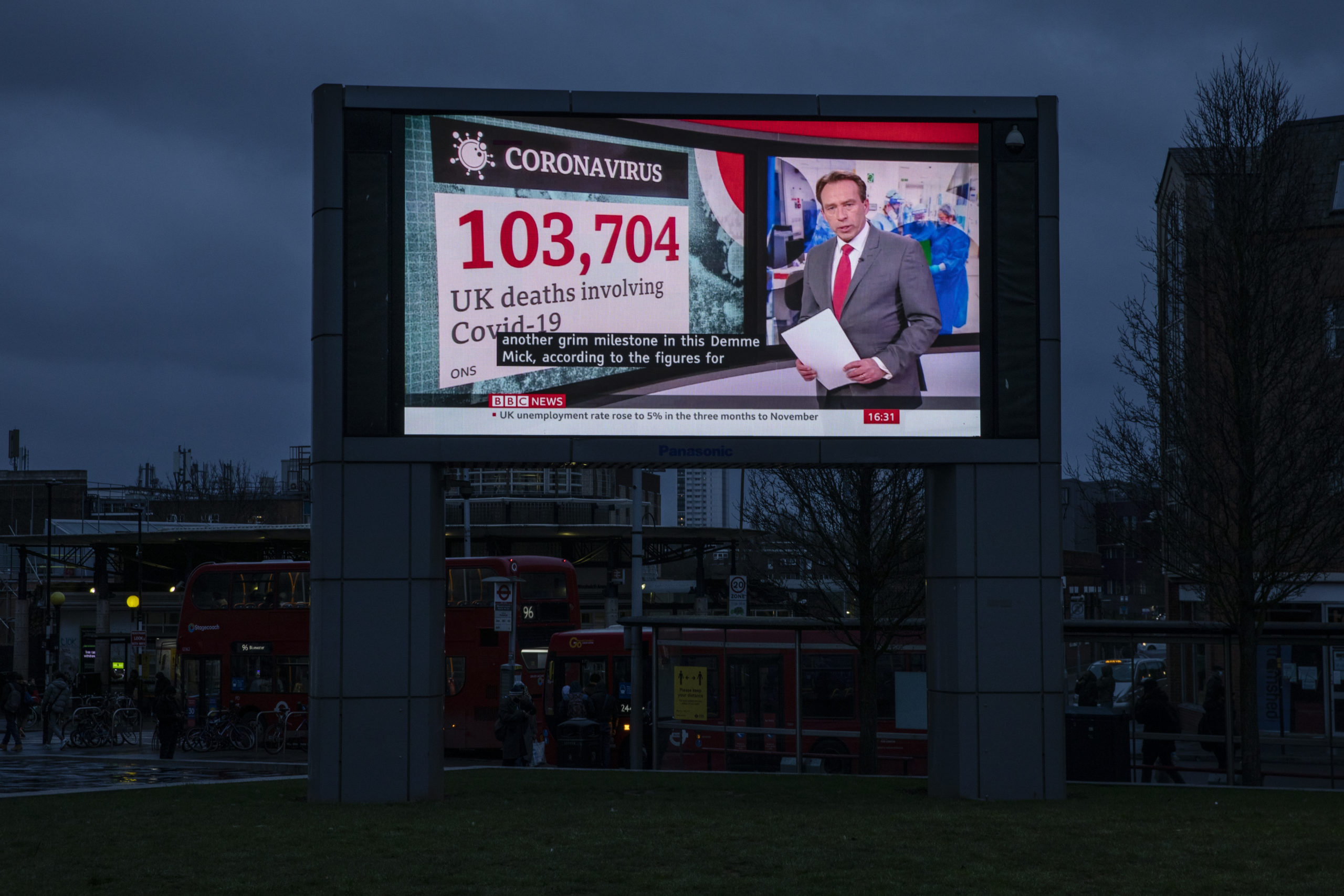 David Spiegelhalter is chair of the Winton Centre for Risk and Evidence Communication at the University of Cambridge and author of “The Art of Statistics: Learning from Data” (Penguin, 2019).

CAMBRIDGE, England — The British press has given a huge amount of attention to a grim milestone in the country: With the announcement on January 26 of an additional 1,631 COVID-19 fatalities, the total number of deaths caused by the pandemic has hit the 100,000 mark.

But there are problems with both of these headline numbers, and they are worth exploring — for reasons that go beyond statistical pedantry.

First, the daily COVID death count refers to reported deaths, which may have occurred some days previously, and tends to oscillate wildly due to the way reports come in.

In the last week, the daily announcements of additional deaths have varied between over 1,800 (Wednesdays are generally high) and under 600 (Mondays are low). The true numbers has been roughly halfway between at 1,100 to 1,200 — which is high enough.

Nearly one year into the pandemic, members of the media still obsess over these daily “new” numbers, rather than look at recent trends in deaths according to the day on which they actually occurred. There is no excuse for this oversight, as these numbers feature prominently on the government’s (excellent) coronavirus dashboard.

The second problem has to do with the headline figure of 100,000 deaths. It is an appalling and eye-catching number, and yet it is still a substantial underestimate of the real number of COVID fatalities.

According to the criteria used by the U.K. government, the 100,000 figure refers only includes people who died within 28 days of a positive COVID test.

But in the early days and months of the pandemic, many people were not initially tested and therefore were not included in the tally of COVID deaths. Meanwhile, anyone who survived more than 28 days before succumbing to COVID will also not be included.

This, naturally, results in an undercount. On the flipside, someone who is unfortunate enough to get a positive test, recover, only to be run over by a bus two weeks later will be recorded as a COVID death.

For the most accurate statistics, it’s best to look at the Office of National Statistics data on death registrations, which show that more than 100,000 people in the U.K. had already died with COVID on their death certificate by January 7, nearly three weeks ago. This number rose to 108,000 by January 15, and the total now will be nearly 120,000.

Now, some skeptics will pipe up with the claim that these are people dying “with” rather than “from” COVID. This is not true: Around 90 percent of these were registered with COVID as the primary, underlying cause of death.

Perhaps, then, the most accurate statement is that around 100,000 people in the U.K. have now died directly because of COVID, while the number of those who died with COVID is greater.

An awful total, especially as it’s been estimated that, on average, a COVID death shaves nine to 10 years off a person’s life — less for the elderly and frail; more for the younger and healthier. So 100,000 deaths corresponds to around 1 million years of life lost. A stark figure, though difficult to visualize.

If the U.K. has done badly in absolute terms, its death toll is also high compared to that in other countries. When we look at COVID deaths per million population, we find that, although Belgium and the Czech Republic have higher overall rates, the U.K. tops the table of larger countries with populations of more than 15 million — even if countries such as the United States and Brazil have higher overall numbers of deaths.

Still, there are complications with these types of comparisons. Countries use very different criteria for what counts as a COVID death: While Belgium’s league-topping position may be partly due to its comparatively liberal labelling of deaths as resulting from COVID, there may have been substantial under-diagnosis of COVID in the U.K. among the frail and elderly in care homes who died in their thousands during the first wave.

Moreover, these patterns are changing. While the U.K.’s current death rate is still very high, Portugal’s is now even higher, and Germany and Ireland have joined Sweden and the U.S. with high death rates too.

Things may start to look very different as the winter goes on and the effects of the U.K.’s extraordinarily efficient vaccination program starts kicking in. We can expect deaths in the U.K. to reduce dramatically in March, while countries that have a slower vaccine rollout may continue to see a high number of deaths.

Amid the blame and accusations over vaccine procurement, the U.K. may well stand out as at least having done one thing well.

EU slams AstraZeneca but fails in push for vaccine

Hong Kong: Dominic Raab urges China to ‘step back from...