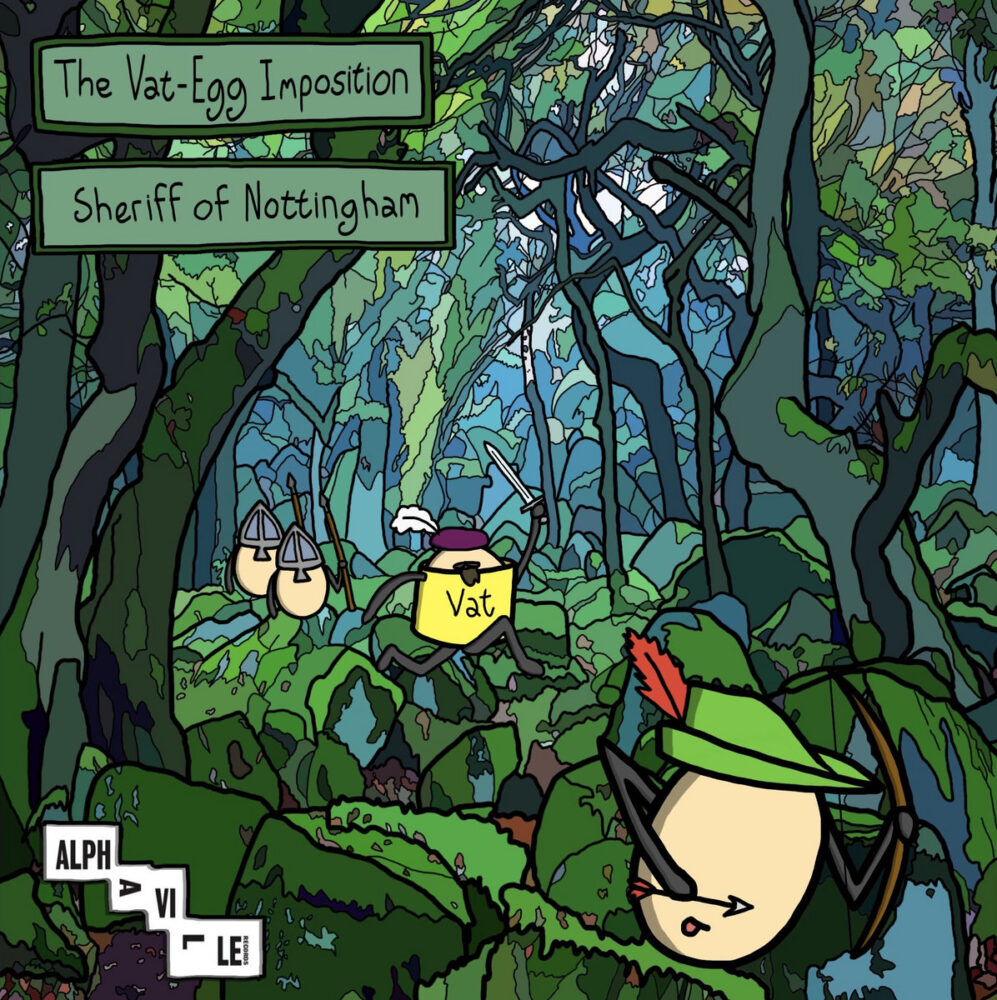 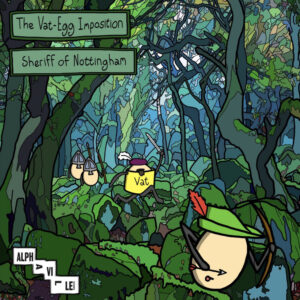 Andy Brown reviews The Sheriff Of Nottingham for Louder Than War, the latest single from Leeds-based, indie-punk oddballs The Vat-Egg Imposition.

Last year I was lucky enough to catch The Vat-Egg Imposition supporting Jeffrey Lewis & Los Bolts at The Brudenell Social Club; playing a set peppered with the kind of catchy, punk-pop once delivered by the late, great Pete Shelley. Add to this the rather indelible image of a vocalist dressed as a man-sized egg while brandishing a carrier bag full of crisps and a precious, solitary can of Rubicon Mango. They were always going to leave an impression.

Sheriff Of Nottingham might just be the most ludicrously addictive 2 minutes 45 seconds of music committed to tape this year. Vocalist Vat-Egg sings us a tale from the perspective of the titular bad guy. It’s not easy for the poor Sheriff, Robin Hood keeps putting arrows in his guards and the peasants all think he’s the bee’s knees. To add insult to injury, Maid Marion has dumped the Sheriff and is currently striding about the forest with the self-styled Prince of Thieves. All of this is put to a sprightly punk tune, sprinkled with infectious keyboard lines and backing vocals worthy of the Merry Men. Alan Rickman, Tony Robinson and that big, anthropomorphic wolf from the Disney film would most certainly approve.

My favourite part of buying a cassette single back in the nineties was always getting to hear that exclusive b-side. The equally fantastic Get My Green Mug Back Again recounts the time our protagonist lent his favourite mug to a neighbour, “It had sugar in it/ I think that she needed it/ To put on her Weetabix”. The story takes a turn for the worse when he reveals, “But she never came round again/ And now somebody else has moved in”. This highly entertaining and all too relatable tale is put to a genuinely joyful and immensely catchy, toe-tapping indie-pop tune. Imagine, if you will, a young John Shuttleworth fronting the Buzzcocks. Two insanely catchy songs crammed with humour, fun and Python worthy absurdity – what more could you want?

You can listen to and buy the single via Bandcamp here

All words by Andy Brown. You can visit his author profile and read more of his reviews for Louder Than War here

Neil Young Slams Trump Over Use of His Music at Mount Rushmore Event: ‘This Is Not...

Body Found in Search at California Lake Where ‘Glee’ Star...

Vanilla Ice to Perform In Texas Despite Surge in Virus...

Fox Stevenson's 'Lava' Is A Cute Slice Of DIY Pop