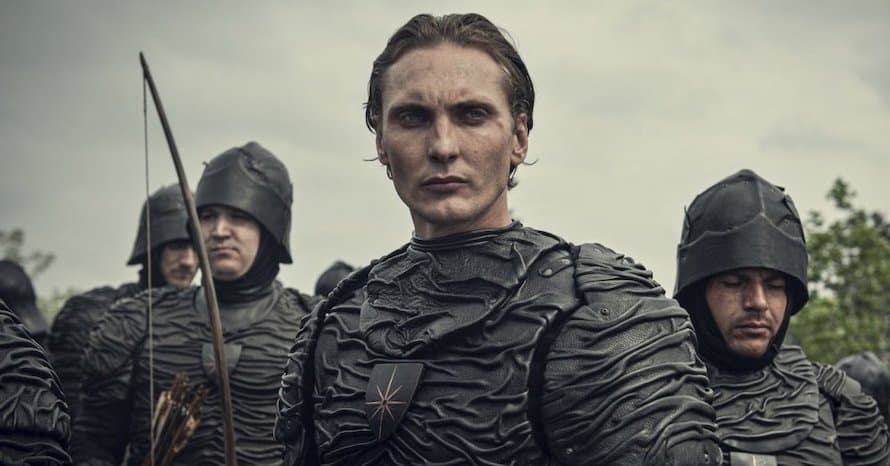 The latest set photos from Netflix’s The Witcher highlights the impressive new Nilfgaardian armor the villains will wear in season two.

While The Witcher fans were recently treated to new images of Ciri and Yennefer on the set of the Netflix series, the villains of the series are also getting an upgrade. The new Nilfgaardian armor was revealed by The Witcher fan site, Redanian Intelligence, and shows off a much different look for the soldiers. Filming is currently underway in the United Kingdom after production was paused due to the pandemic like many other film and TV productions.

The site showed off Eamon Farren’s Cahir wearing his new gold and black armor, which looks closer to the villain’s look in The Witcher game series. It’s a good thing Henry Cavill’s Geralt of Rivia also has a new set of armor to go up against the intimidating antagonist. The photo also shows off the Nilfgaardian sorceress Fringilla Vigo, played by Mimi Ndiweni. The armor looks more traditional than the strange, wet leather look the villains were wearing in the first season that’s for sure. Check out the new photo below.

What do you think of the new Nilfgaardian armor in The Witcher season two? Are you glad it looks similar to the games? What else do you want to see from the next season? Sound-off in the comments below!

Based on the best-selling fantasy series, The Witcher is an epic tale of fate and family. Geralt of Rivia, a solitary monster hunter, struggles to find his place in a world where people often prove more wicked than beasts. But when destiny hurtles him toward a powerful sorceress, and a young princess with a dangerous secret, the three must learn to navigate the increasingly volatile Continent together.

The Witcher season one is now available on Netflix. Stay tuned to Heroic Hollywood for all the latest news surrounding The Witcher, and make sure to subscribe to our YouTube channel for more video content in the future!

Talking to your doctor about an abusive relationship