The Wrap: Player welfare no concern as All Blacks take it up a notch in Auckland

If player welfare is supposedly rugby’s current big concern, it appears somebody failed in their duty to pass on the memo to the All Blacks’ Caleb Clarke. In his first run-on Test match yesterday, Clarke monstered the Wallabies defence at every opportunity, pin-balling bodies and bringing back memories of Jonah Lomu and Julian Savea at […] 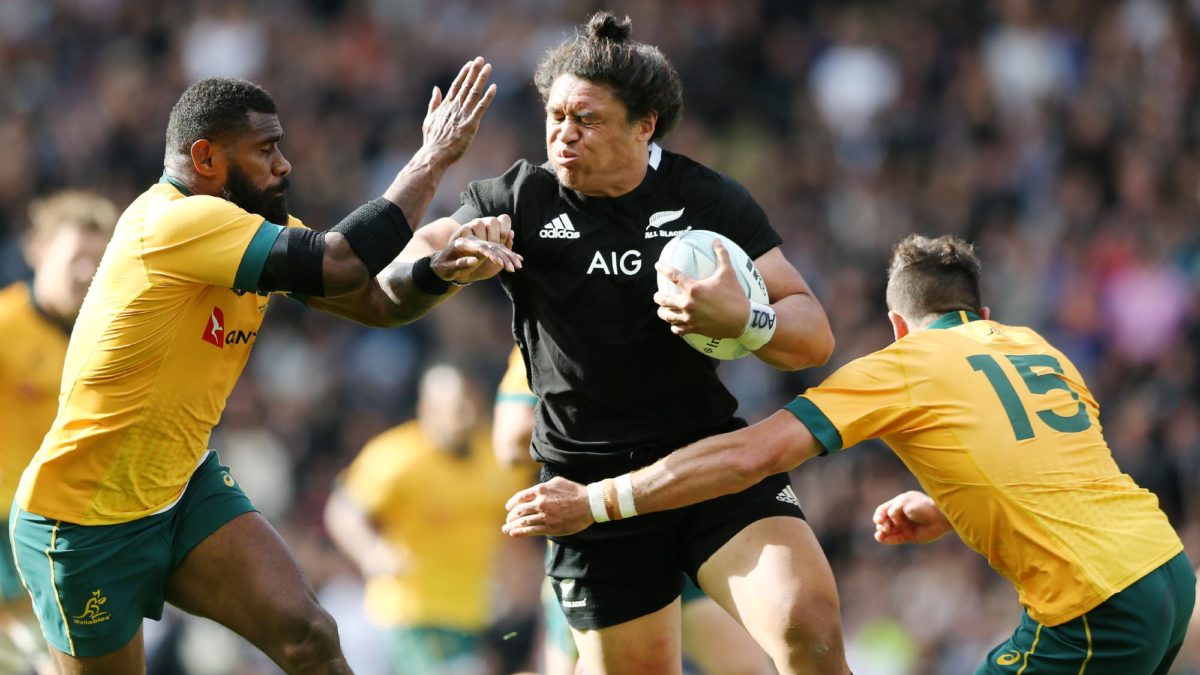 If player welfare is supposedly rugby’s current big concern, it appears somebody failed in their duty to pass on the memo to the All Blacks’ Caleb Clarke.

In his first run-on Test match yesterday, Clarke monstered the Wallabies defence at every opportunity, pin-balling bodies and bringing back memories of Jonah Lomu and Julian Savea at his peak.

Typically an All Blacks response to a lacklustre performance one week is to ramp up the physicality the next. And while the Wallabies knew full well what was coming, stopping that momentum proved another thing altogether.

The All Blacks constructed a platform from their solid set-piece and a dominant line-out maul, which provided sniping opportunities to halfbacks Aaron Smith and TJ Perenara. And when aimless kicks strayed too far into the backfield – as they invariably must when sides are placed under continuous pressure – the All Blacks’ power running came to the fore.

It was Taniela Tupou’s rushed kick that bought Beauden Barrett into the game in the 16th minute, which led to the first points of the match. Likewise, Clarke gleefully accepted James O’Connor’s invitation in the 46th minute to blow the Wallabies defence and the match apart, Ardie Savea crossing with men to burn outside him.

Savea is the type of player who takes criticism of a quiet performance personally, and his trademark leg drive was back in earnest. With Sam Cane another to have a strong ball-carrying game and with a dry deck favouring quick transfer, the Wallabies were not able to apply anything like the rushing defensive pressure they were able to apply in Wellington.

They weren’t entirely accurate throughout, but the All Blacks were more clinical when it counted – the opening try an example, where from a rock-solid five-metre scrum Jack Goodhue timed his run perfectly and pushed through O’Connor and a quick recycle allowed Smith to stay too low to the ground for Ned Hanigan. Seven points in the blink of an eye.

While the All Blacks weren’t as convincing as in last year’s’ 36-0 Eden Park response, this is clearly a much improved and better organised Wallabies side. Their performance should be enough to provide coach Ian Foster with enough clear air to get through to the end of the season, when a more timely – and fair – assessment might be better made.

Critics might also reflect that there isn’t a soul who would have predicted that any one of Tupou Vaa’i, Alex Hodgman and Peter Umaga-Jensen would have played in the second Bledisloe Cup match of the year, let alone all three of them together!

For their part, the Wallabies scrummed well on their own ball and were much improved at the lineout. They asked plenty of questions in attack, finding continuity via some lovely little touches and offloads, albeit with the misfortune to come up against an All Blacks defence that was more punishing and accurate than their own.

Down 20-7, the Wallabies showed great character to immediately bounce back, with Marika Koroibete and Brandon Paenga-Amosa both denied over the tryline. But after Koroibete rushed out of the line to let Patrick Tuipulotu put Sam Cane in for a 27-7 lead, the sting went out of their punches and the game drifted to an inevitable conclusion in the final quarter.

Coach Dave Rennie and skipper Michael Hooper were contemplative post-match, well aware that if they are to win the two return fixtures, not only will they have to tackle better, but they will need to wrest control of the game back their way in order to stop New Zealand’s power runners coming at them in the first place.

Expect a return to more contestable kicks from Nic White and continued focus on improving their attacking clean-out, both essential to eliminate the counterattacking strength of their opponent.

In historical terms, this was an outcome that was entirely predictable, never mind that sections of the media who don’t know any better – and rugby people like David Campese, who should know better – prematurely rushed to proclaim the demise of the All Blacks at the expense of Rennie’s new Wallabies.

Nevertheless, despite the convincing nature of this All Blacks’ win, there remains a sense that things are evening out a little, and the fact the Bledisloe Cup is still up for contention when the sides resume battle in a fortnight’s time will ensure a high-profile, highly anticipated clash in Sydney.

Last Thursday night I watched the 2019 movie Uncut Gems starring Adam Sandler as New York jeweller Howard Ratner. It’s a difficult watch – or should I say difficult listen – with scene after scene an intense, suffocating assault of noise and shouting as Howard struggles to keep his personal and business lives afloat.

The viewer is ultimately rewarded with a pulsating climax and a lesson that parlaying one problem into chasing an even bigger bet is no pathway to a secure future. When your problems are as many and as deep-rooted as Howard’s are, there is no place for getting ahead of oneself thinking things are fixed when there are simply too many things already out of your control.

So it was when the very next day the South African Rugby Union (SARU) announced it would be withdrawing from the Rugby Championships. With no World Cup champion, the value of the tournament has been decimated. Bad enough given the parlous financial position of all four nations, but even worse given how – in true Howard Ratner style – the anticipated broadcast revenue has already been spent.

With a championship schedule locked in – aside from petty squabbling from New Zealand over the completion date – Rugby Australia went ahead and, prior to the 30 September deadline, reinstated all 44 members of the Wallabies squad to 100 per cent of the value of their contracts.

But with broadcasters now about to lop another few million off 2020 revenues and with two matches dropped from the Wallabies schedule, that’s looking more like one of Howard’s losing bets.

With COVID bubbles necessitating grossly oversized squads, there was a silver lining to Rugby Australia being able to offer a Wallabies Test jumper (or the promise of one) to such a large cohort of players – if you like, to discourage them from taking the Izack Rodda path and to keep them at home in Super Rugby for 2021 and hopefully beyond.

The loss of two Tests now means fewer opportunities for fewer players. It also means that Rugby Australia is paying big money – money it now doesn’t have – for not as much in return.

With a return to the bargaining table in the middle of a Bledisloe Cup series unlikely, Rugby Australia will have to cop this one on the chin. It’s not as if they’re unaccustomed to receiving financial knockout punches, but the players can surely not expect such a generous outcome moving forward unless the current broadcasting rights negotiations deliver an unexpectedly favourable outcome.

All non-Wallabies squad members remain on 70 per cent of their contracts, so there is the very real likelihood that this level will become the new normal. All of which strikes me as a ‘player welfare’ issue more genuine than what was tossed up by SARU for an unquestioning media to swallow as the reason for their no show.

Let’s be clear about one thing: South Africa are no more or less self-interested than any of their SANZAAR partners and have a right to act in whatever way they believe best serves South African rugby.

Rassie Erasmus has built a huge bank of credits, in this case enough to win the argument that South Africa’s ego and reputation carries more weight than its immediate financial needs and those of its SANZAAR partners.

But to use the cloak of ‘player welfare’ is as demeaning as it is fallacious. South African players in the UK are currently competing with and against players who have tested positive to COVID-19. How has SARU stepped in to ensure their safety and welfare?

South African players in the French Top 14 are subjected to brutal nine and a half month-long seasons, and that’s before any preseason is taken into account. All reputable sports science says that this provides for insufficient physical and mental recovery, yet what has SARU done to ensure better welfare outcomes for these players?

I’ll leave it to you to guess how vigorously SARU took that issue up with World Rugby in the interests of Vermeulen’s welfare.

No, player welfare is now some apparently nebulous concept, a direct descendant of Tony Greig’s notorious ‘player comfort meter’ of cricketing days gone past. Whereby a requirement for 500 minutes of prior playing time has magically asserted itself as a benchmark, fed into Greig’s machine and excreted out the other end as an established fact.

Fact? Try convenience instead. If only the player comfort meter had been put to better use at Eden Park yesterday when Caleb Clarke was wreaking havoc on the Wallabies. That would have been a far more relevant and credible proposition.

Why it takes To’omua to tango

Wallabies coach yet to give up hope Joseph Suaalii will...

Bam! And now the hope is gone

Kwagga Smith may not get picked for the Boks