Everybody is giddy about … The post Thiago breaks record nobody knew existed; Mbappe next? appeared first on Football365. 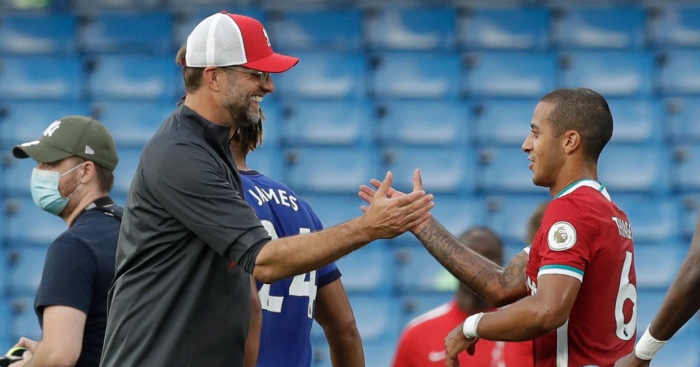 Everybody is giddy about Thiago. Kylian Mbappe next?

Thiago has been in Liverpool two minutes and already he shouts “go go Robbo, yeah Robbo” when Robertson presses and recovers the ball! What a boss!

Man shouts. What a boss!

75 – Half-time substitute Thiago completed more passes (75) than any Chelsea player managed in the entire match. Since full passing data is available for the Premier League (2003-04), his 75 successful passes are the most by a player who played a maximum of 45 minutes. Control. pic.twitter.com/UvHfrw1ggN

So obviously that led here:

‘Liverpool signing Thiago sets new Premier League passing record despite only being on pitch 45 minutes vs Chelsea’ – The Sun.

‘Midfield maestro Thiago outpassed EVERY Chelsea player despite only playing 45 minutes… This record-breaking debut showed why Jurgen Klopp’s ruthless Liverpool are getting even STRONGER’ – MailOnline.

‘Thiago breaks Premier League record in just 45 MINUTES – but does Frank Lampard need to go all out for Declan Rice?’ – talkSPORT.

Pardon Mediawatch for being a bit of a dick for a second here, but we have a simple rule: Don’t hail a record unless you know who held that record before. If you don’t know – and none of those websites have a clue – it is basically a meaningless number.

Lies, damned lies etc
Over in the actual Daily Mirror, John Cross tells us about ‘the Premier League record of completed passes in 45 minutes – 75 – more than Chelsea combined’.

Hmmm. Now that would have been impressive.

Not the Mane man
Spare a thought for Sadio Mane – scorer of both goals in Liverpool’s 2-0 win over a Big Six rival – for it turns out that there is ‘Bad news for title rivals as Alcantara steals the show’ (The Sun).

And there we were thinking that goals win games, not lovely passes and conceded penalties.

A message to you…
They do not lack imagination over at the Express website:

It’s one hell of a way to sell a perfectly reasonable match piece from Matthew Dunn which mentions Man City in the 21st paragraph.

When did football just become one giant ‘message’?

“No chance. Absolutely no chance. Sorry for killing that story!”

…when asked about signing Kylian Mbappe for over £200m.

And here we are in September 2020 and this is a headline on propaganda machine Liverpool.com:

Well done for getting the man’s name in the headline – especially after he scored on Sunday – but what the hell have we just read?

‘Thiago had been running down his contract. He had a year remaining on his current deal, refused to enter into discussions regarding an extension, and told the German club that he wanted to leave. At 29, having won the treble, and being widely celebrated for his role in the Champions League success, he is not the usual Liverpool signing.

‘And yet, as the reports claimed throughout the summer, Liverpool were interested in his esteemed services. They recognised his elite-level ability, understood that he would substantially improve their present midfield options, and pulled the trigger, even if he did not fit the normal profile.

‘Perhaps, then, this shows a change in approach. Liverpool will not solely focus on the mid-table stars who can step up their performance and production when inserted into Klopp’s system. In turn, could this offer hope for future signings?

Because of course buying  is exactly the same as signing a 21-year-old who is literally the most valuable player in the world from PSG. Exactly the same.

Thiago was an excellent signing for Liverpool partly because he was relatively cheap; Mbappe is not. When Klopp said “no chance” to signing the Frenchman, it was not because he only wants to buy ‘mid-table stars who can step up their performance and production when inserted into Klopp’s system’, but because the club would never pay over £200m on any footballer. Few clubs can.

‘Given Mbappé’s quality, price tag, and potential, there are only so many teams that could both attract and afford him. Liverpool certainly fall in the former category, though their willingness to spend lavishly is not so assured. The Thiago signing, therefore, perhaps offers hope that, should Mbappé come available, Liverpool may break their mould of the usual cheaper, lesser-known transfer target and chase the big fish.’

It really f***ing doesn’t. Or at least not until Mbappe is 29 and has just one year remaining on his contract at a club that is willing to accept a low initial fee rather than lose him for nothing in 12 months.

Blast off
Over on The Sun website for their top story at 10.30am on Monday morning:

Players? This is the actual quote from Jurgen Klopp:

“It was not one of my subs but another member of staff and I told him already what I think about it and he’s good with that.”

And that’s the truth.

IPL 2020, DC vs KXIP: KL Rahul Calls Super Over Defeat A ‘Bittersweet’ One