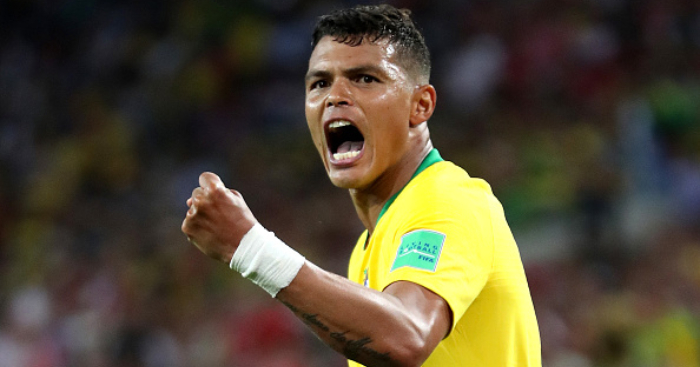 Thiago Silva has revealed he joined Chelsea to win the Premier League title.

The defender turns 36 on Tuesday, but has insisted he still has the qualities to thrive at the sport’s top level.

Silva already boasts 89 Brazil caps but reiterated his desire to feature at the 2022 World Cup in Qatar, as well as targeting silverware with new club Chelsea.

Silva brought to an end eight years with Paris St Germain by joining the Blues on a free transfer, and has revealed his excitement at his west London challenge.

“What motivates me, day by day, is the hunger to win; to win everything within my reach,” Silva told Chelsea’s official club website.

“Coming to the Premier League, my main goal is to win the league title and I’m certain that we’ll be fighting for that every step of the way.

“The team is really strong, we’ve got a great coach and I’ve come here to contribute in whatever way I can to ensure that we get as close as possible to achieving those aims.

“That’s what motivates me: stepping out onto the pitch, and then winning, winning, and winning some more. I don’t think about anything else.

“The work that I’m putting in to make this a reality already started a while back and now Chelsea have given me a great opportunity to continue playing at the highest level.

“What Chelsea represents to me is a source of great happiness and motivation to be a part of a new project, a new family and I hope that this will be a very special year together.”

Chelsea have spent more than £200million on Frank Lampard’s summer overhaul, with Timo Werner, Hakim Ziyech, Kai Havertz and Ben Chilwell all on board with the Blues.

Silva admitted he now wants to help Chelsea back to their dominant best, claiming titles and trophies at home and in Europe.

Lampard hopes Silva can add leadership and direction to his leaky defence, with the vastly experienced centre-back admitting the manager’s faith proved central to his decision to join the Blues.

“The club has gone a few years without spending big money, without regenerating the squad, but now we’re starting again on a new journey with some big signings,” said Silva.

“I hope that this reboot will bring the same success as the club has enjoyed in the past.

“I hope to be able to play my part out on the pitch, and I hope that this reboot proves to be just as successful as the project I helped experience at PSG.

“The confidence that he (Lampard) showed in me, that was all it took.

“For me that confidence was the single most important factor. To hear that he believed in me, that he thought I could come here and make a positive contribution.

“With our young group as well as some more experienced players like our captain (Cesar) Azpilicueta, we’ve got all it takes for a great season.”

Why has Joe Hart become such an easy target?