This vaccine, which may be easier to get to the public, appears to be 90 percent effect at halting disease and maybe spread of the new coronavirus. 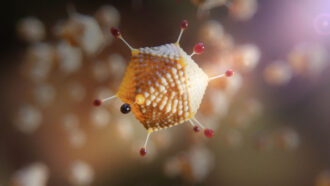 For the third Monday in a row, another major drug company released preliminary data on a COVID-19 vaccine. This one, too, can apparently cut the risk of getting sick from the novel coronavirus by at least 90 percent. AstraZeneca and the University of Oxford in England created this new vaccine. The treatment also appears to cut the spread of infections.

Explainer: What is a vaccine?

Companies perform what are known as clinical trials to test how well a treatment works in people and how safe it is. The data that AstraZeneca released on November 23 involved more than 22,000 people. All took part in the United Kingdom and Brazil. So far, there have been 131 cases of COVID-19 among them. No one who took the vaccine got severely ill or needed to go to the hospital.

Not all people were vaccinated the same way. Most (8,895) got two full doses, each a month apart. Another smaller group (2,741 people) got a half dose of the vaccine the first time, and a full dose 30 days later. In that second group, the treatment appeared 90 percent effective. Getting two full doses of the vaccine dropped its disease-prevention rate to about 62 percent. It’s not clear why starting with a half dose worked better.

The vaccine’s maker described the findings in a news release.

One big advantage of the latest vaccine: It doesn’t have to be kept as cold while awaiting use. Both of the earlier vaccines do need be kept very cold. In fact, Pfizer’s vaccine needs to stay at –70° Celsius (–94° Fahrenheit). In contrast, AstraZeneca’s can be stored at temperatures found in regular refrigerators. So no special freezers or storage systems are needed.

AstraZeneca says it can produce 3 billion doses of its vaccine in 2021.

A different approach to a coronavirus vaccine

Unlike the vaccines by Pfizer and Moderna, this latest one is not based on mRNA (a cousin of DNA). Researchers at Oxford and a university spin-off called Vaccitech instead started with a weakened version of an adenovirus. It causes colds in chimpanzees. (This same chimp virus was used to make an Ebola vaccine.) To fight the new coronavirus, the chimp virus was tweaked to infect human cells. But it can’t cause disease.

Explainer: What is a spike protein?

Instead, it delivers instructions telling cells how to make a so-called “spike” protein. It’s a protein that covers the outside of the virus that causes COVID-19. Human cells infected with this adenovirus then make that spike protein. This prompts the body’s immune system to attack any virus wearing those same spike proteins.

It is encouraging that different types of vaccines all seem to work well at protecting against COVID-19, says Rajesh Gandhi. He’s an infectious-diseases physician. He works at Massachusetts General Hospital and Harvard Medical School, both in Boston.

The FDA recommends that COVID-19 vaccines should reduce cases of disease by half in treated people (when compared to untreated people or those given a placebo). Pfizer, Moderna and now AstraZeneca/Oxford have all reported efficacy rates far above that. However, none has yet shared details of their efficacy data with independent scientists. That process is called peer review. And it’s the gold standard for assessing the value of new treatments.

“I’m thrilled that several different vaccines look like they’re showing [efficacy] at rates that are higher than what we [set] as the benchmark,” said Gandhi. In fact, he called it “great news.” Gandhi spoke during a November 23 news briefing. It was held by the Infectious Diseases Society of America.

AstraZeneca said its new vaccine cut spread of the virus by reducing symptom-free infections. “That’s critical,” said Gandhi, because a lot of COVID-19’s spread is by people who show no symptoms.

This vaccine is still being tested in the United States, Japan, South Africa, Kenya, Russia and Latin America. More trials are planned elsewhere in Europe and Asia. Earlier in the year, trials of this vaccine were briefly halted. One volunteer had gotten a neurological illness. The trial restarted when regulatory agencies decided it didn’t look like the vaccine had been to blame.

There’s water on sunny parts of the moon, scientists confirm

What Are The Real Odds Of ‘Doomsday’ Asteroid Apophis Striking Earth In 2068?

How To Watch Mercury, Venus, And The Moon All Unite In...