This high-tech sweeper is designed for super-clingy moon dust

An electron beam is the newest tool being developed to remove sticky and damaging lunar dust from surfaces. 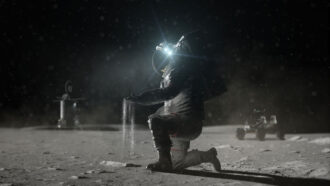 NASA aims to send a man and a woman to the moon by 2024. This is the goal of its Artemis program. These missions will search for lunar resources (such as water) that future crews might convert into such things as oxygen and fuel. But for Artemis to succeed, the U.S. space agency first needs to solve a big problem: the damaging threat of moon dust.

Over billions of years, asteroids and meteors have slammed into the moon. These hits have crushed lunar rock into dust. The sun’s radiation gives this dust an electric charge that makes it stick to everything. Those powdery bits are like “broken shards of glass,” notes Mihály Horányi. He’s a physicist at the University of Colorado Boulder. That dust is so abrasive, in fact, that it can damage equipment. If inhaled, it might even harm an astronaut’s health.

Horányi is part of a team that has now figured out how to combat one troubling aspect of the dust: its static cling. His group uses a low-powered electron beam. When shined onto the dust, that beam sends the dust flying.

Better than a paint brush?

During the 1970s, astronauts in NASA’s Apollo missions relied on a very low-tech system to clean lunar dust off their spacesuits. They swept it away with what looked like the brushes used to paint a house. But the electrically charged nature of space dust tended to thwart such hand sweepers. That powdery material clung tightly to the nooks and crannies of a spacesuit’s fabric.

The new electron-beam broom takes advantage of the dust’s electrical properties. As the beam hits the dust, it releases electrons into the tiny spaces between particles. Some of these negatively charged electrons will be absorbed by the surrounding specks of dust. Like-charged particles repel each other. So the electric field that builds up on these specks “ejects dust off the surface [of things],” explains Xu Wang. He’s another physicist at the University of Colorado Boulder.

“This is a very unique idea,” says Hiroyuki Kawamoto. He’s a mechanical engineer at Waseda University in Tokyo, Japan and did not take part in the new work. Kawamoto and his colleagues know about dust-busting tech, however. One project they’re developing relies on a layer of electrodes. When embedded in a spacesuit or the surface of equipment, these electrodes generate electrostatic forces. Those forces sweep away charged dust particles.

Such systems are more complex than shooting an electron beam at surfaces. But a potential downside to electron beams, Kawamoto points out, is that they need a robot or other system to guide them.

Another problem with the electron beam, at least for now, is that it leaves up to one-fourth of the dust behind. The Boulder group aims to improve that cleaning power. The electron beam also is just one of several ways future space explorers could keep surfaces clean, Horányi says. Other tactics might include changes to a spacesuit’s design. One day, lunar habitats may even come with moon-dust mudrooms.

Are landlords falling out of love with letting agents?

Starts With A Bang Podcast #62 — Black Holes and ALMA

Beyond The Black Hole: Event Horizon Telescope Solves A...

The Unexpected Reason Why The Smallest Black Holes Bend...