The Velvet Mafia – Darryl W. Bullock Omnibus Press Published 4th February 2021 “The gay men who ran the swinging sixties…” Author Darryl W. Bullock who specialises in music history and LGBT issues returns with his latest work ‘The Velvet Mafia’. Set in the hugely significant and influential period from the late 1950s through the […] The post Thr Velvet Mafia by Darryl W Bullock – book review appeared first on Louder Than War. 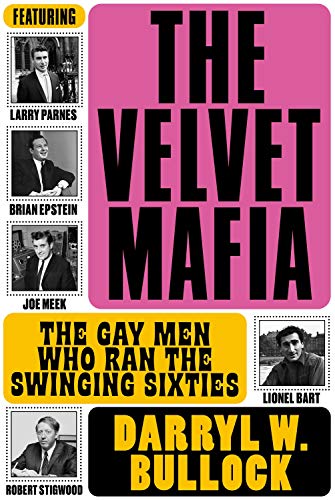 “The gay men who ran the swinging sixties…”

Author Darryl W. Bullock who specialises in music history and LGBT issues returns with his latest work ‘The Velvet Mafia’. Set in the hugely significant and influential period from the late 1950s through the swinging sixties and into the early 1970s this book concentrates on a number of key LGBT professionals who were at the heart of the music industry during one of its most important and exciting periods.

Collectively known as The Velvet Mafia, this book explores the stories and friendships of the following: Beatles Manager, Brian Epstein, Impresario Larry Parnes, Record Producer Joe Meek, Playwright Joe Orton, Songwriter and Author of ‘Oliver’ Lionel Bart, Head of EMI Sir Joseph Lockwood, Bee Gees and Cream Manager Robert Stigwood and Marc Bolan’s Manager Simon Napier Bell. Looking at how these influential men at the very heart of the music industry worked together and supported one another and ultimately made history whilst changing the music industry and pop culture forever.

When reading this book it is important to remember that this was a very different time, a time when homosexuality was illegal, this was long before the Gay Pride movement had been formed. A time when to be gay could and would mean the end of careers and worse.

Homosexuality was only part decriminalised in England in 1967.

Written using new interviews with some of the subjects and those who were there at the time, along with unpublished and rare archive materials, including personal diaries. The Velvet Mafia is a great read and offers a fascinating insight behind the scenes of the rock n roll explosion in the UK.

Coming to this book, I knew some of the names, but not all and only a little of the history and stories that would unfold as the pages turned. I am not the biggest fan of much of the music of this era, but I will say the following: firstly, as a gay man I found this book to be thought-provoking, enlightening and thoroughly enjoyable, and secondly, as a music lover I found it to be both fascinating and informative.

It is impossible to say what the music industry would have been like without The Velvet Mafia, but they certainly played a hugely important part in shaping it as is detailed in this book.

This is the sort of history I wanted to learn about at school and I am hugely grateful to have had the opportunity to have this history lesson courtesy of Darryl W. Bullock. At a little over 300 hundred pages, this is a fantastic read, well written and full of interesting facts about the music industry.

You can purchase the book here:

Words by Martin Mathews, you can find more at his Author profile and he tweets here

From Flying Lotus to Fatboy Slim, Here Are 8 Dance Tracks...