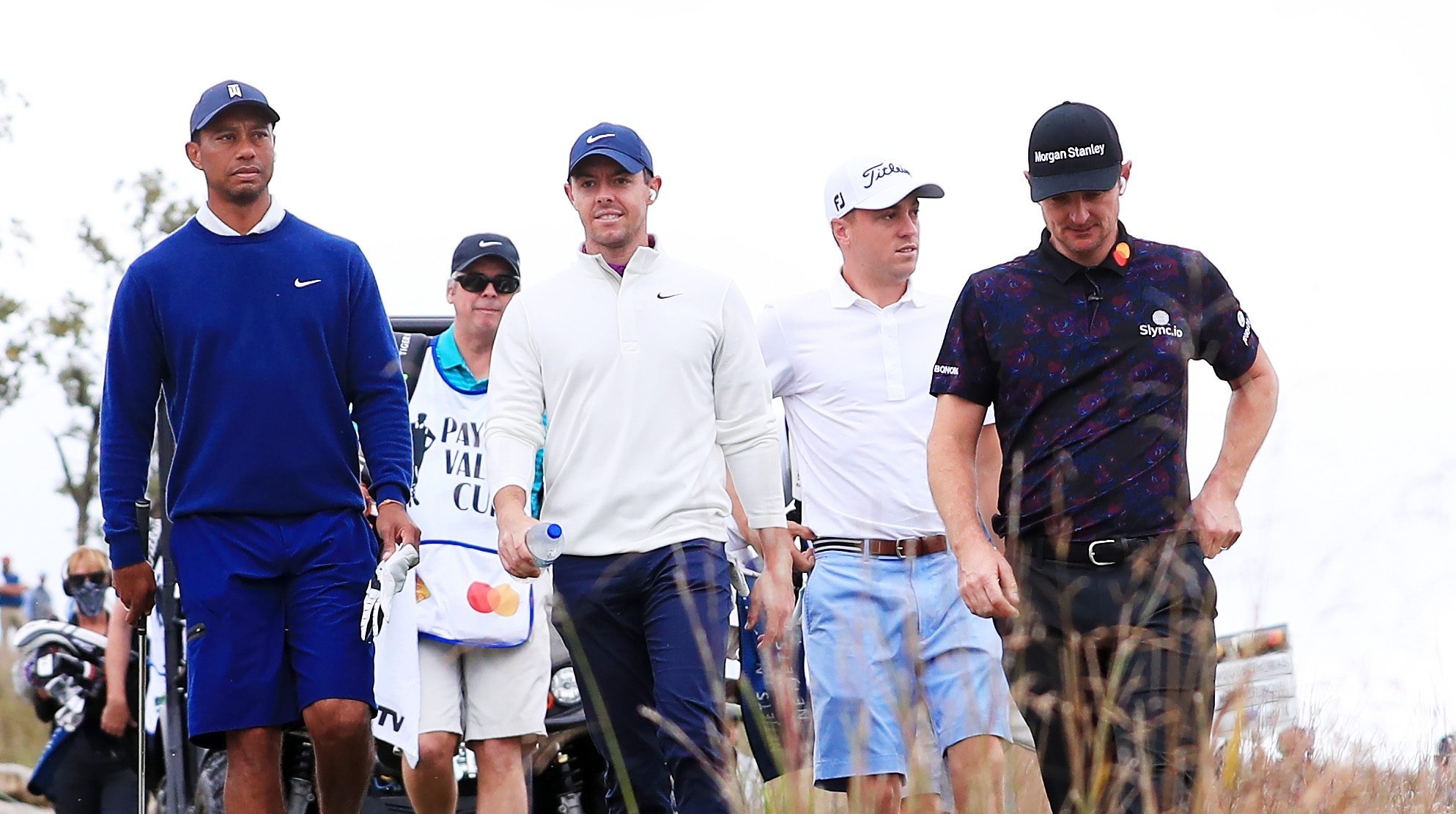 RIDGEDALE, Mo. – Tiger Woods and his TGR Design firm have built one of the widest golf courses imaginable at Big Cedar Lodge. Never mind that he missed the first fairway left on opening day in the Payne’s Valley Cup and lost a ball. It all worked out fine for Woods and American partner Justin Thomas.

That duo outlasted Rory McIlroy and Justin Rose on the first day of golf at Payne’s Valley in the Ozarks in a Ryder Cup-style exhibition match. The course was named in honor of Missouri native Payne Stewart, who died in a plane crash in 1999, and Stewart’s family was in attendance.

The American side took the title in a mix of fourball, foursomes and singles – with a bonus shot at a watery 19th hole designed by Bass Pro Shops and Big Cedar founder Johnny Morris. McIlroy and Rose won the opening six-hole segment of best-ball foursomes, and Woods and Thomas won the second six-hole segment of alternate shot. It went to singles matches from there, with Rose beating Woods 1-up and Thomas beating McIlroy 2-up to leave the match tied after 18 holes.

It all came down to that 120-yard shot to an island green at the par-3 19th hole set among exposed rocks towering an imposing 150 above the green. That final hole was played as a closest-to-the-pin contest, and Thomas hit the best shot to within 9 feet of the hole to close out the international duo. As a bonus, Jack Nicklaus, Gary Player and Payne Stewart’s son, Aaron, also played tee shots at the 19th hole.

It was all to showcase one of the biggest course openings of the year. Payne’s Valley, the first public-access course Woods and his team designed in the United States, is the third 18-hole course at the expansive resort, which also is home to two par-3 courses. Phil Mickelson won , the Charles Schwab Series, at Big Cedar in August.

“I’m just so thankful that these guys came, and that they enjoyed it,” Woods said of Tuesday’s match. “The experience we had, that is what we want this to be all about.”

The other two 18-hole courses – Ozarks National by Bill Coore and Ben Crenshaw, and Buffalo Ridge Springs by Tom Fazio – are the top two courses in Missouri in Golfweek’s Best Courses You Can Play rankings for public-access courses. Payne’s Valley shares the mountain views and rolling landscape among exposed rock formations, but it couldn’t be a more different golf experience than those two existing courses.

Woods said Payne’s Valley was built to accommodate families and new players, giving everyone a chance to enjoy their time outside. In that vein, the fairways are incredibly wide, allowing just about any player to keep moving without too many punitive hazards. Many of the Zosia grass fairways are 80 yards wide or more in the typical landing areas, and the only real rough is positioned to stop balls from rolling off mountainous ridges and into trouble. Many of the holes feature slopes to help keep a wayward shot in play or even feed it toward the green.

For better players, there’s almost a different course within all that width. Greens are set at angles that can challenge better players, forcing them to play to one side of the fairway or another to set up the best angle to attack the pins and make birdies. There’s hardly a flat spot on the property, and even with all that width there are not really any pushover holes.

“My philosophy is to try to have movement and have flow, and to not lose a golf ball,” Woods said. “… To have kids, to have grandparents all play, the whole idea is to keep the ball moving and have it on the ground and give them the chance to have a good time.”

USGA's Mike Davis: Through the Years