Jason Todd officially becomes Red Hood in Titans season 3 - but with Joker nowhere to be seen, another villain may be responsible for the turn. 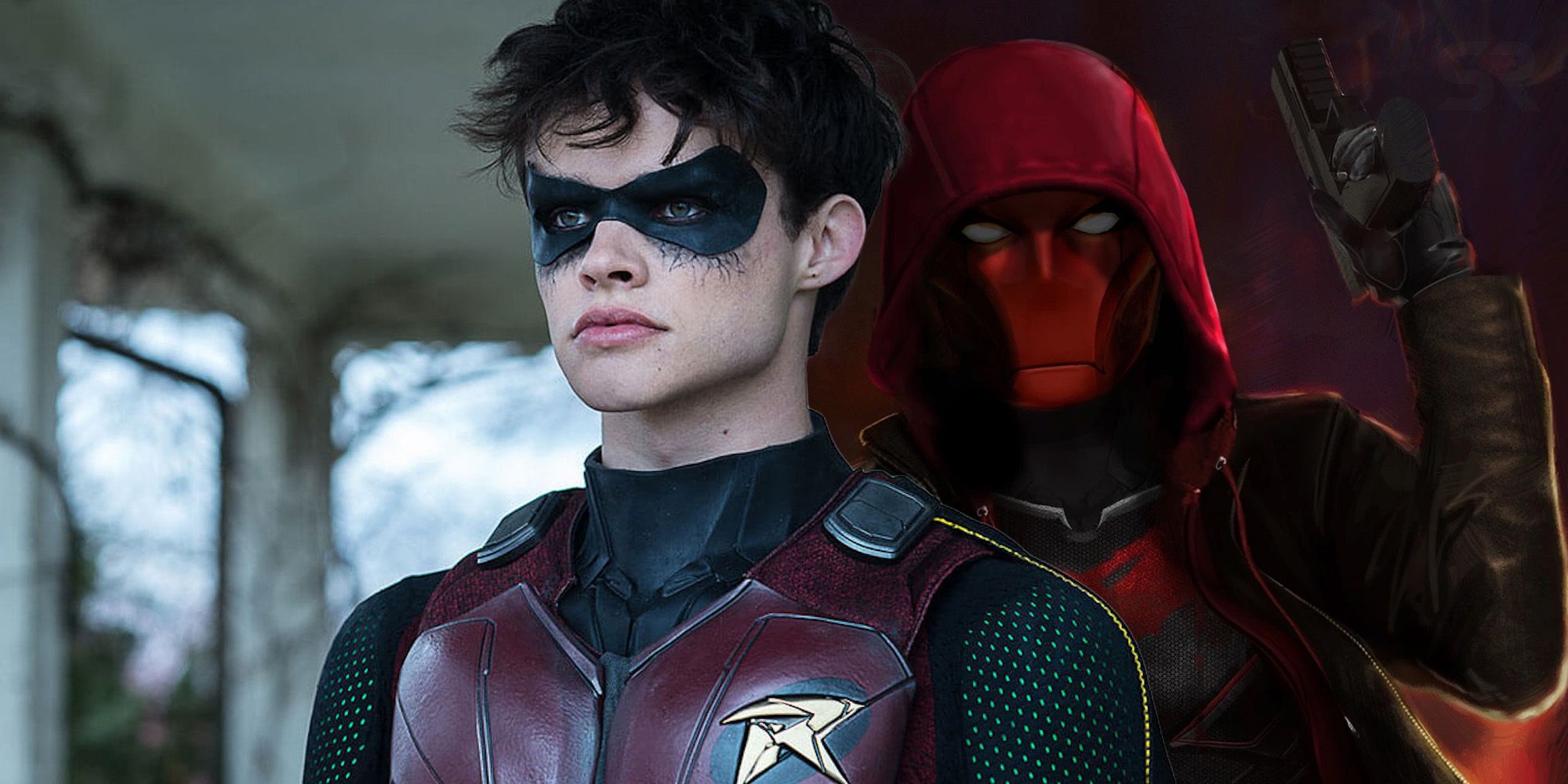 Jason Todd will officially become Red Hood during Titans season 3 - here's how the show can explain the turn despite lacking Joker and several other elements of his comic book origin. Created by Gerry Conway and Don Newton, the character made his first appearance in 1983's Batman #357 and served as the second incarnation of Robin. His tenure was brutally short-lived, however. Captured, tortured, and then killed by Joker during Jim Starlin's A Death in the Family storyline, Jason Todd long represented Bruce Wayne's greatest failure as a crime fighter.

In 2005, Batman: Under The Hood revealed that Jason Todd had been resurrected by an extradimensional event. After some time in a coma, and then living on the streets, Jason was discovered by Talia al Ghul. Using the Lazarus Pit, she restored both his full health and his lost memory. Unfortunately, the decision also resulted in Jason becoming mentally unstable. Haunted by Talia's statement that he "remains unavenged", Jason spent years pursuing similar (yet deadlier) versions of the training Batman himself went through. Ultimately returning to Gotham City, Jason adopted the Red Hood persona and relentlessly targeted Joker, Batman, and various criminal organizations.

Related: How Titans Season 3 Might Be Different On HBO Max

Curran Walters debuted as Jason Todd in the closing moments of Titans season 1, episode 5, "Together". After saving Dick Grayson (Brenton Thwaites) from a hit-squad, the two teamed up to solve a series of murders. Jason would later appear briefly in a dream sequence, before returning more substantially in Titans season 2. With Walters promoted to a series regular, Jason joined Titans 2.0 at the behest of Iain Glen's Bruce Wayne. Though it was hoped that the move would smooth out "his rough edges", Jason was left with severe PTSD from his encounter with Deathstroke (Esai Morales). Furthermore, his repeated clashes with the rest of the team left him more alienated than ever. The final straw came when he discovered that his new love, Rose Wilson (Chelsea Zhang), had initially been working with the Titans' nemesis - and was responsible for that which he'd been blamed. As a result, Jason turned his back on both Rose and the team. Fans immediately speculated that this could lead to Jason's Red Hood turn in live-action. Fortunately, they are set to get their wish in 2021.

It was first confirmed that Jason would become Red Hood at the DC FanDome event, back in August 2020. Since then, details have remained scarce. Walters, though, did share that he had started delving into his research on the new side of the character. Equally, pieces of fan art emerged, depicting how the actor might look in the role. With filming on Titans season 3 officially underway, however, fans were treated to their first official glimpse. After a tease 24-hours earlier, HBO Max unveiled concept art and an image of Walters in costume as Red Hood. Despite not being entirely comic book accurate, it was met with a largely positive reaction.

Despite the wave of excitement, it's become clear that the lack of comic book accuracy will extend to the story. As mentioned, the big part of Red Hood's origin is being killed by Joker. The whole reason Jason chose that persona was due to it being intrinsically linked to Joker. In both the original continuity and Alan Moore's The Killing Joke, the villain briefly donned the Red Hood mantle before a vat of chemicals transformed him into the Clown Prince of Crime. As such, Jason co-opted the persona as both a nod to and a slight against those he blamed for his death. It also gave Batman a mystery to investigate, with Jason wanting to torment him with the identity reveal. Despite that, will seemingly eschew Jason's death from the turn.

The most likely reason for the decision is that Titans isn't allowed to use Joker. Though DC and Warner Bros have eased off somewhat with doubling up, there are still core characters they save strictly for the big screen. Batman and Joker are prominent among them - especially since the big screen now has multiple versions running concurrently. Joaquin Phoenix's turn in Joker earned him an Oscar and it was later confirmed that Jared Leto and his special brand of Joker's insanity would be added to Zack Snyder's Justice League in reshoots. Equally, the DCEU has three distinct Batmen in the works, via Ben Affleck, Robert Pattinson, and Michael Keaton reprising his 1989 version of the role. As such, though Titans featured a Bruce Wayne, he'll likely never suit up as Batman. And while the show did tease Joker's existence in Titans season 1, the chances of him turning up directly are slim to none. However, with Titans more and more embracing its own, almost Elseworlds-style take on the source material, it could fall to another villain entirely to push Jason Todd firmly over the edge.

Related: Titans Season 3 Is Already Becoming Too Obsessed With Batman

Created by Bill Finger and Bob Kane, Jonathan Crane (a.k.a Scarecrow) made his comic book debut in 1941's World's Finest Comics #3. In the decades since the self-styled Master of Fear has been relatively underutilized outside of the Arkham Asylum video games. Though played by Cillian Murphy in Christopher Nolan's trilogy, he mostly served as a minor supporting villain or simply a cameo. With the action returning to Gotham City, however, it was previously season 3. And so, Titans could break that by having Scarecrow dramatically impact the story and characters in a more direct and meaningful way.

Instead of Joker, Titans looks set to continue with Jason's emotional issues being the catalyst for his Red Hood turn. Equally, his accumulated traumas from Titans season 2 will likely also play a substantial part. That being said, it would still be quite a sizeable jump to go from where Jason was left off to the point he targets the Titans with murderous intent. That is, unless he's subjected to something that exacerbates his emotions and inner turmoil - something like Scarecrow's fear toxin. Given Jason's impetuous nature and deep-seated desire to prove himself, it would make sense for him to embark on solo missions after departing the Titans. For one of them to go wrong when crossing Scarecrow would be thematically similar to the experience with Joker, while also being its own thing. The inclusion of fear toxin would also be a decent stand-in for the equally absent Lazarus Pit, with it serving as the final straw that breaks Jason's mind.

Jason's whole journey thus far has been punctuated by his lack of self-esteem and abandonment issues. He has previously managed to hide it beneath layers of bravado, but his coming to contact with fear toxin would bring them all to the surface. The fear toxin would force him to painfully relieve every instant of abandonment and more in quick succession and potentially leave him as broken and haunted as he ended up in the comics. That would be especially true if the Titans continue without even a thought towards him, or even replace him. There have been rumors that Roy Harper will be joining the show. If so, his being replaced by a red-themed tribute to Robin Hood, coupled with his overwrought emotional state, could also potentially account for his choice of Red Hood persona.

Similarly, his lingering trauma over what happened with Deathstroke would likely also be compounded. As such, it would make for a fitting reason as to why he would start lashing out violently at his former allies, masked criminal threats, and basically everybody that crosses his path. The exposure to fear toxin could drive him even deeper into himself, his pain. As such, it could understandably prompt him to develop a new murderous persona as a defense mechanism. And lead to him more brutally overcompensate by instead inflicting pain onto others and making criminals and such fear him. No matter what the show does, there will be many frustrated that it couldn't abide fully by comic book accuracy. As things go, however, this could be an extremely interesting and unique way to tell the story. It would also be better than the necessary developments occurring off-screen. Whatever the case ends up being, however, Jason Todd's fate will become clear when Titans season 3 is finally released.

More: What To Expect From Titans Season 3

Star Trek Discovery Season 3: Every Change To Earth In The 32nd Century