Toxic germs on its skin make this newt deadly

Bacteria living on the skin of some rough-skinned newts make tetrodotoxin. This paralyzing poison is also found in pufferfish. 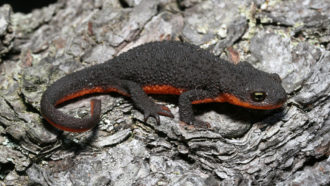 Some newts living in the western United States are poisonous. Bacteria living on their skin make a powerful paralyzing chemical. It’s called tetrodotoxin (Teh-TROH-doh-TOX-in). These rough-skinned newts appear to borrow the poison to avoid becoming some snake’s lunch.

The toxin, known by the initials TTX, stops nerve cells from sending signals that tell muscles to move. When animals swallow the poison in low doses, it can cause a tingling or numbness. Higher amounts cause paralysis and death. Some newts host enough TTX to kill several people.

This poison is not unique to the newts. Pufferfish have it. So does the blue-ringed octopus, some crabs and starfish, not to mention certain flatworms, frogs and toads. Marine animals, such as the pufferfish don’t make the TTX. They get it from bacteria living in their tissues or by eating toxic prey.

It had been unclear how rough-skinned newts (Taricha granulosa) got their TTX. Indeed, not all members of the species have it. The amphibians don’t appear to pick up the lethal chemical through their diet. And a 2004 study had hinted that the newts didn’t host TTX-making bacteria on their skin. All of this suggested the newts might make TTX.

But TTX is not easy to make, notes Patric Vaelli. He’s a molecular biologist at Harvard University in Cambridge, Mass. It seemed unlikely that newts would make this poison when no other known animal can.

Vaelli led the new study while he was at Michigan State University in East Lansing. He and his team decided to double check for toxin-making bacteria on the newts’ skin. In the lab, they grew up colonies of bacteria collected from the newts’ skin. Then they screened these germs for TTX.

The researchers found four types of bacteria that make TTX. One group was Pseudomonas (Su-duh-MOH-nus). Other bacteria from this group make TTX in pufferfish, the blue-ringed octopus and sea snails. It turned out that poisonous newts had more Pseudomonas on their skin than did rough-skinned newts from Idaho that aren’t toxic.

The data offered the first known instance of TTX-making bacteria on a land animal. Vaelli’s team reported its results April 7 in eLife.

But there may be more to the story

The new data do not necessarily “shut the book” on the idea that newts can produce TTX, says Charles Hanifin. He’s a biologist at Utah State University in Logan. Newts have some forms of the toxin that scientists have yet to see in bacteria. Researchers also still don’t know how bacteria make TTX. That makes it harder to conclude precisely where the newts’ poison comes from, Hanifin argues.

But the finding does add a new player to an evolutionary arms race that pits newts against garter snakes (Thamnophis sirtalis). Some snakes living in the same regions as toxic newts have developed resistance to TTX. These snakes can then feast on TTX-laden newts.

It’s possible that Pseudomonas bacteria have become more abundant on newts over time. As levels of the bacteria have risen, the animals would have turned more toxic. Then, Vaelli says, the pressure would be back on snakes to evolve greater resistance to the toxin.

Is It Dark Matter? Mystery Signal Goes ‘Bump’ In World’s Most Sensitive Detector

36 Alien Civilizations In The Milky Way? The Science Behind A Ridiculous Headline

What Is It Like As You Approach The Edge Of The Universe?

Can wildfires cool the climate?

#BlackBirdersWeek seeks to open the outdoors for everyone

When physicians and veterinarians team up, all species...