Wind moving through tree branches is all the energy needed to power devices that can detect a remote fire before it rages into an uncontrolled inferno. 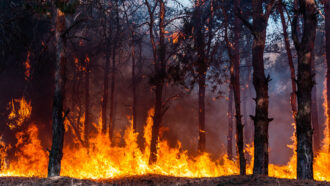 Scientists in Michigan have developed a forest fire alarm system. It not only can detect when a blaze begins but also call for help. This battery-free device dangles like an ornament from a tree and harvests all the energy it needs from the natural swaying of branches. Such a sensor could watch the woods for a decade without human attention.

“It’s a great idea,” says engineer Chris Knight in Newcastle, Australia. He works at CSIRO, Australia’s national research agency. He didn’t contribute to the new work but he knows about wildfire sensors. A few years ago he also developed an idea for a tree-powered one. Such systems need only a trickle of power to smell smoke or detect rising heat, he says.

Changyong Cao agrees. “For forest-fire monitoring, you don’t need high amounts of energy,” notes this engineer at Michigan State University, in East Lansing. Cao led the team behind the new device. It recharges itself about every 10 minutes with just enough power to take a measurement. That’s plenty of time, he says, “to generate sufficient energy.”

If it detects a fire, the sensor signals a device up to a mile away. That hub can relay an alarm. It can collect such data from tens or even hundreds of sensors, Cao says.

There’s an obvious need for fast monitoring of remote forests. Every year, fires burn millions of acres in the United States. As of mid-September, about 100 fires still raged in Oregon, California, and Washington. Tens of thousands of people have had to pack their valuables and evacuate to safety.

Early detection also can save lives. Right now, forest fires are spotted from satellites or fire towers. Neither, Cao notes, is as fast or low-cost as tree-hanging sensors would be.

When neither solar power nor batteries are an option

Cao’s group faced two main challenges in creating its new sensors. First, these have to produce enough power to survey the forest and send out a signal. Second, that power source has to be durable.

To tackle the first, they decided to turn mechanical motion into electricity — static electricity, actually. Static electricity is produced when two materials rub together and exchange electric charges. It’s the reason you can rub a balloon on your hair and then the balloon will stick to a wall.

The device that converts this is known as a TENG. That’s short for triboelectric (Try-boh-ee-LEK-trik) nanogenerator. It generates a current as two materials rub together. Scientists have explored TENGs as one way to harvest energy from the natural world. These include harvesting energy from impacts on tabletops, falling rain — even keyboards.

The new TENG for forest use has two parts. The top is made of nested cylinders, one inside another inside another. Each is coated with a copper film. The bottom is made of a similar batch of nested cylinders. But these are coated with a nonstick material called PTFE (short for polytetrafluoroethylene). PTFE isn’t as alien as it sounds. It’s the chemical used to coat many nonstick frying pans.

The top and bottom slide into each other, then the package is hung from a tree branch. The bottom cylinder hangs from a rubber band attached to the upper part. When a tree branch sways, the top and bottom cylinders move together and apart. This causes the PTFE and copper to exchange electric charges, producing a current. That current is small, yet easily enough to power a thermometer to detect the temperature changes signaling a fire. (Cao says his team also plans to install a detector for carbon monoxide, a gas produced by fires.)

How to make this system durable was a tougher challenge. Cao’s students tested materials that were stretchy, to let the bottom part bounce. The material also had to be strong, so it wouldn’t break. They eventually settled on a strong rubber band that has survived strenuous laboratory testing.

Tree-suspended sensors is not what’s novel

Australia certainly has its share of remote wildfires (known there as bush fires). In 2011, Knight and a colleague in Australia proposed fire sensors to harvest energy from local trees. It didn’t call for TENGs. Instead, Knight’s team had planned to use other materials that can generate current from the swaying of trees.

In the end, Knight never pursued the idea beyond building a model. He’s now moved on to other projects. Still, he thinks tree-powered sensors are a smart way to keep tabs on forests from afar. And the idea by Cao’s group has the potential to benefit from newer TENG technology, he says.

“A system like this is a great idea,” says Knight. And, he adds, “You don’t need that many of them to get a whiff of smoke and send off an alarm.”

Cao says his team’s new model has not yet been tested over long time periods in the real world, but the device is ready. All he needs now, he says, is the money to build more of them.

Who Will Fly The Last Airbus A380?

This ancient reptile’s last meal may have truly been a...

If bacteria stick together, they can survive for years...

A Hong Kong man got the new coronavirus twice

Could We Achieve Interstellar Travel Using Only Known Physics?

Hubble Reveals A ‘Red Dot Surprise’ From The Distant Universe

Busy beavers may be speeding thaw of Arctic permafrost