As the economic toll of the COVID-19 pandemic takes shape around the globe, the Costa Rican government finds itself in an increasingly difficult position trying to balance an exploding budget […] The post Trouble in Paradise: Violence at Protests Threaten to Unhinge IMF Agreement in Costa Rica appeared first on Latin America News Dispatch.

As the economic toll of the COVID-19 pandemic takes shape around the globe, the Costa Rican government finds itself in an increasingly difficult position trying to balance an exploding budget deficit with groups of protesters who oppose new loans and tax increases. A group known as Movimiento Rescate Nacional (National Rescue Movement) on Sept. 30 around the country to protest a government proposal to borrow 1.7 billion in loans from the International Monetary Fund (IMF) to lessen the blow of the pandemic’s economic impact.

Since border closures began in March 2020, Costa Rica’s unemployment in a country that relies heavily on the presence of 2.5 million visitors a year.  With Costa Rica’s GDP expected to suffer for the coming year, the prospects for a smooth recovery are increasingly slim.

Protesters have taken to the streets to voice their discontent by erecting barricades along highways and municipal roads, blocking local transit and commercial traffic with debris. In response, President Carlos Alvarado , which would have on high income earners, bank transactions, as well as large properties. The administration has since invited opposition leaders to negotiate a new fiscal reform package.

Within days of his announcement, however, blockades in some locations turned violent, with protesters hurling molotov cocktails and rocks at police and even with officers inside. In another instance, protesters where a pregnant woman in labor was trying to get to the hospital. Leaders of the Movimiento Rescate Nacional, like Célimio Guido, , stating, “Let go of your pride. We are going to sit down and negotiate.”

Despite by the government and political leaders for dialogue, blockades remain in place around the country. After nearly two weeks of blockades, the Costa Rican judiciary determined the road blockages were illegal, and implored the Fuerza Publica (police force) and Alvarado’s administration to bring an end to the protests. A number of incidents in which the police used tear gas to break up the crowd were reported, though most encounters with the police have concluded peacefully. Protesters in the country’s capital of San José clashed violently with the police on Oct. 12, in exchanges. Both Costa Rican authorities and the Movimiento Rescate Nacional claim that during the protests in recent weeks. Prosecutors the protest leaders for “participation and organization of criminal acts such as illicit association, obstruction of the public highway, obstruction of public services and public instigation.”

is the organizer of a blockade in the southern region of Pérez Zeledón. He claims to not be affiliated with any political group or movement but rather represents “farmers, truckers and the people who have been abandoned by this government.” When asked about negotiating with the government on a new fiscal plan, Castillo responded: “The problem is that the government does not want to negotiate anything. We have been to the presidential house, and the government does not even meet with us and that is why we are on the street.”  Castillo’s list of demands includes: no deal with the IMF, no new taxes, lower government pensions and lower the transport tax. Even though to lower pensions and to prevent taxation of the nation’s poorest citizens, Castillo and his supporters remain defiant insisting the roads will remain closed “until the government listens to us.”

Castillo and his supporters expressed frustration with a sense of growing inequality and what he describes as the “welfare state.” He said the Costa Rican government “only wants to bring imported products.”

“When I try to sell my cows, now I have to lower the price because people can buy cheaper cows from Nicaragua and Panama. And on top of that, they want to charge me tax for the sale. Meanwhile, there are government employees being paid $20,000 per month. This isn’t right,” said a protester who works as a groundskeeper for a Canadian owned farm. 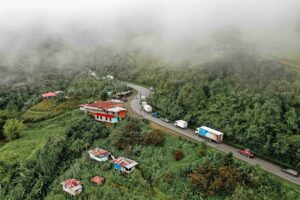 Criticism of the IMF is rooted in the organization’s history with Latin America. At the end of the Cold War, the IMF offered Structural Adjustment Programs (SAPs) to low income countries around the world, procuring loans in exchange for privatization of public services in an attempt to reshape third world economies, which were not aligned with either bloc, into free market states. For Argentina and many other Latin American governments, the result was disastrous, weakening democratic institutions and their currency. Since the 2008 global financial crisis, however, the in favor of that give states more power in determining the terms of their loans.

Costa Rica has held . When the global price for coffee plummeted in the 1980s, Costa Rica found itself on the brink of economic collapse and used a series of loans from the IMF to pull itself out of the crisis. In April 2020, Costa Rica was granted from the IMF’s emergency fund to ensure its public health care system could bear the load of COVID-19 cases. The move . Since April, Costa Rica’s intensive care and hospitalization capacity has more than doubled to meet the needs of infections. With just over , the healthcare system has remained intact and for its handling of the crisis.

But the country’s ballooning deficit is threatening their ability to meet the challenges ahead. Negotiating a balanced budget that meets everyone’s demands will be a true test of strength for President Alvarado’s administration. Movimiento Rescate Nacional with evangelical groups and the political opposition party in calling for a referendum to oust the president.

Prior to the pandemic, Costa Rica was considered a top tourist destination for U.S. and Canadian travelers, a year. However, the IMF projects this year’s tourism revenue to be “” due to the COVID-19 crisis.

Six months into the pandemic, Costa Rica’s border closures, resulting economic hardship and the latest round of protests may be exacerbating an already tenuous situation. When asked about the potential for violence Castillo commented: “We don’t want blood to be spilled but if we have to spill blood then so be it.”

On Oct. 14, a vehicle carrying a family of tourists from Hungary after a heated altercation. Three protesters were sent to the hospital and the driver was held in custody. Hours later police broke up Castillo’s blockade and a number of others in the region of Pérez Zeledón.

Negotiations that were set to begin on Oct. 17 with representatives from around the country to develop a new economic recovery plan have since fallen apart. Trade unions and protesters have called for a general strike to begin on Oct. 19 using “tortuguismo,” a tactic in which vehicles congregate in the road moving as slowly as possible to disrupt traffic.

One leader from Movimiento Rescate Nacional, Oscar Campos, repeated the assertion that the Costa Rican government was being run by drug cartels and announced that he was organizing more than 150 points of the country to confront the police with arms.

Six former Costa Rican presidents announced on Sunday their support of Alvarado’s administration and democratic institutions. Since the protests began, the government has agreed to lower the transport tax and has passed legislation to cut annuities for government officials by $75 million.

It is unclear if going forward the administration will continue to seek support from the IMF. Either way, the road to recovery will certainly be bumpy, but hopefully not blocked.

Annika Beaulieu is a journalist, filmmaker, and photographer from Los Angeles, CA.  She received a MA from the New School in NY in International Affairs and Development Economics. She has spent the last 13 years in Latin America covering environmental policy and indigenous issues. She has lived in Pérez Zeledón, Costa Rica, for the last 3 years.

Indiana Pacers Reportedly Have Interest In A Gordon Hayward Trade