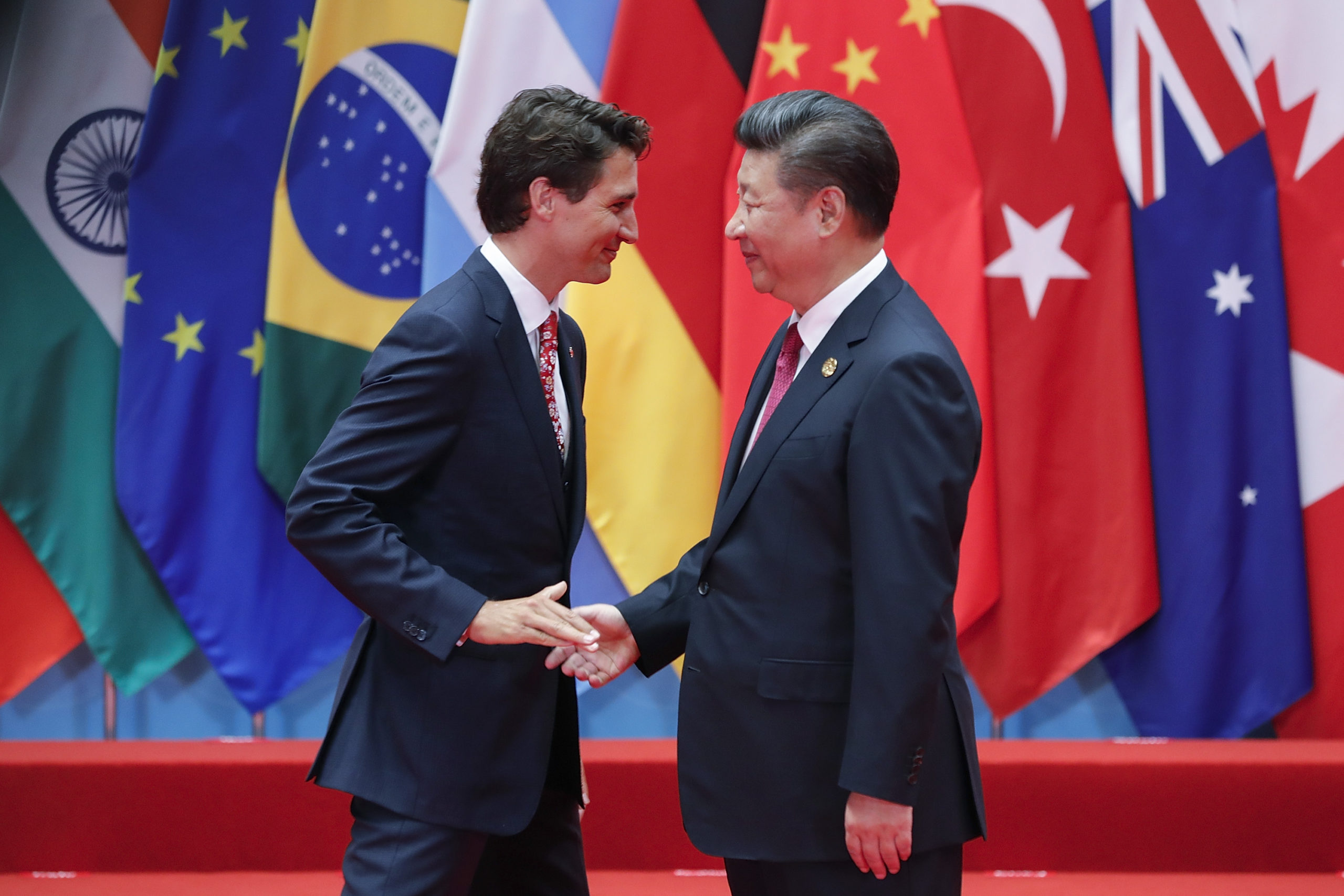 The organizers of one of the world’s most prestigious defense gatherings are in the midst of an uncomfortable international standoff between the Canadian government and China over a major award they had planned to give to the president of Taiwan.

The standstill, which is ongoing and has not been previously reported, has created tension between the Halifax International Security Forum and the Canadian government, which is a major sponsor of the forum.

Late last year, according to multiple sources familiar with the matter, the forum’s organizers decided to give its John McCain Prize for Leadership in Public Service to Tsai Ing-wen, the president of Taiwan. Cindy McCain, a member of the forum’s board of directors, greenlit the decision to honor Tsai with the prize named after her late husband.

It would have been the third time the HFX presented the McCain award. The first, in 2018, went to the people of Lesbos, Greece, for their efforts to save refugees; the second, in 2019, went to the citizen protesters in Hong Kong. HFX planned to give the third to Taiwan’s president for standing strong against China’s relentless pressure.

When Canadian officials learned of the forum’s plans, they made it clear that if organizers gave the honor to Tsai, the Canadian government would pull support — and funding — from HFX.

HFX hasn’t decided how to proceed. For now, the situation appears to be on ice.

“HFX has not yet announced the winner of the 2020 John McCain Prize for leadership in public service,” said the forum’s Vice President Robin Shepherd in a statement. “We look forward to making the announcement, and conducting a presentation event at an appropriate time, given the challenges that the Covid-19 pandemic presents. President Tsai of Taiwan is a well respected international leader, the first female president of Taiwan, and a strong global advocate for democracy. She would certainly be an ideal fit for this award. At this time, we have no further announcements to make.”

The McCain Institute, where Cindy McCain is chair of the board of trustees, did not respond to requests for comment.

POLITICO is a media partner of the event but is not involved in decisions about the prize. POLITICO employees handling its role with HFX did not participate in this story.

The forum’s website states it is “devoted to strengthening strategic cooperation among democratic nations.” It also purports to take a critical stance toward Beijing’s autocratic expansionism, and last year released a publication called “The HFX Handbook for Democracies,” which highlights “the serious challenge that China poses.” HFX promises donors that their contributions to the forum will strengthen their governments’ “resolve to stand up to China.”

Now the question is whether the forum itself will buck the Canadian government and honor one of Beijing’s top targets.

Trudeau’s government appears uncomfortable with the situation. Ottawa has shied away from provoking Beijing after tensions spiked in December 2018, when Canadian authorities arrested a senior Huawei executive on behalf of the U.S. In an apparent retaliation, China arrested two Canadians just days later and has since charged them with espionage.

A spokesperson for Sajjan, Canada’s defence minister, would not confirm or deny whether the Trudeau government threatened to pull out of the forum over the organizers’ plan to present the award to Tsai.

“The Government of Canada has provided financial support through a contribution agreement with the Halifax International Security Forum,” Sajjan’s spokesperson Todd Lane wrote in an email to POLITICO. “While financial support has been provided, the Department of National Defence and the Canadian Armed Forces are not involved in the planning of the Forum. The organizers reach out to us, as well as many other organizations, for panelists on various topics and we try to support when appropriate.”

Sajjan is scheduled to testify Monday evening before a special parliamentary committee on Canada-China relations.

Officials from Taiwan’s missions in Washington and Ottawa declined to comment.

Ottawa’s relationship with Beijing in a parlous state

In recent months, the Chinese government has targeted Taiwan with a hybrid warfare campaign, including election interference, cyberattacks and drone intrusions into its airspace. The unstinting barrage has battered the country’s economy and sparked fears of a full-scale invasion. Meanwhile, under Tsai’s leadership, only 10 of Taiwan’s nearly 24 million people have died of Covid-19. In January 2020, she won a landslide reelection victory against a rival who wanted closer ties with Beijing.

Beijing does not recognize Taiwan’s independence, and has long sought control of the dynamic island democracy. The Communist government has worked to undermine international recognition of Taiwan, using its clout to pressure companies and institutions to change maps depicting it as an independent country.

The U.S. maintains unofficial relations with Taiwan, and on Friday the State Department released guidelines allowing closer interaction between U.S. diplomats and those from Taiwan, as Reuters detailed. Much like the United States, Canada’s “One China” policy means Ottawa doesn’t recognize Taiwan as a sovereign state, nor does it maintain official relations with Taiwanese government.

Honoring Taiwan’s president at such a high-profile conference in Canada would likely irk Beijing — especially as Prime Minister Justin Trudeau tries to secure the release of the two Canadians imprisoned in China.

Kovrig and Spavor were tried last month in separate, one-day proceedings, each behind closed doors. Canadian diplomats and media were barred from entering the courthouses for both hearings. The men are now awaiting the verdicts and, if convicted, their sentences.

It isn’t the first time Beijing has arrested Canadian citizens in apparent retaliation for Ottawa’s compliance with its treaty obligations. In 2014, Canadians arrested a Chinese national named Su Bin, who had been indicted in the U.S. for working to steal the plans for the American C-17 military transport plane and F-35 fighter jet. After his arrest, the Chinese government arrested Kevin and Julia Garratt, two Christian aid workers living there. A lawyer for the Garratt family told The New York Times that Beijing made it clear their arrest was designed to pressure Ottawa not to extradite Su Bin. Su Bin later waived extradition, pleaded guilty, and served a brief prison sentence in the U.S. The Garratts are now free.

China is a political problem for Trudeau

While fighting for the two Michaels’ freedom has become a top foreign policy matter for Trudeau, the prime minister has faced criticism for being too soft on China.

The Conservatives’ Erin O’Toole, Canada’s official opposition leader, has frequently tried to frame Trudeau as too cozy with China and challenged the prime minister to stand up to Beijing.

“It’s disappointing but not surprising to see the extent to which the Trudeau government will go to secretly support the Communist Party of China,” O’Toole wrote in an email Friday to POLITICO when asked about the Trudeau government’s ultimatum to the Halifax forum on Tsai. “It begs the question of what else this government is doing in secret to support their friends in China that we don’t know about.”

Trudeau has tried to rally Western leaders — including President Joe Biden — to press China for the release of Kovrig and Spavor. “Human beings are not bartering chips,” Biden said in February following his virtual meeting with Trudeau. “We’re going to work together until we get their safe return.”

Since the arrests of Kovrig and Spavor, however, Trudeau has at times appeared reluctant to take steps that might anger China. Canada remains the only member of the Five Eyes intelligence alliance yet to announce a decision whether to restrict Huawei from its 5G network.

In February, Canada’s Parliament voted overwhelmingly in favor of a motion declaring Beijing’s mistreatment of Uyghur Muslims a genocide. Trudeau himself and his 36 cabinet ministers abstained from voting on the symbolic motion.

But in other areas, Canada has moved forward multilaterally. The Trudeau government recently joined allies in imposing sanctions on individuals and entities allegedly linked to human rights abuses against Uyghurs in China, including mass internment in concentration camps and reports of forced sterilization of women. It has also called for Beijing to provide independent investigators “unfettered access” to the region.

The Chinese Embassy in Ottawa did not respond to requests for comment.

“No world leader is more deserving of the recognition than President Tsai Ing-wen,” he said. “President Tsai has stood firm against Beijing’s international bullying without undermining the status quo that has kept the peace for decades. Democracies worldwide should refuse to let Beijing dictate how we interact with Taiwan.”

Stop looking on the bright side: We’ll be screwed by the...

EU leaders to meet next month as budget talks intensify,...