The perfect Tuna Steak is seared on the outside and deliciously rare on the inside. Cooked in 2 1/2 minutes flat, it’s also possibly the fastest fish recipe ever! I’m serving this tuna with a vibrant and fresh Sauce Vierge, a light French sauce that’s a modern classic for all the right reasons. Healthy, quick... Get the Recipe The post Tuna Steak appeared first on RecipeTin Eats. 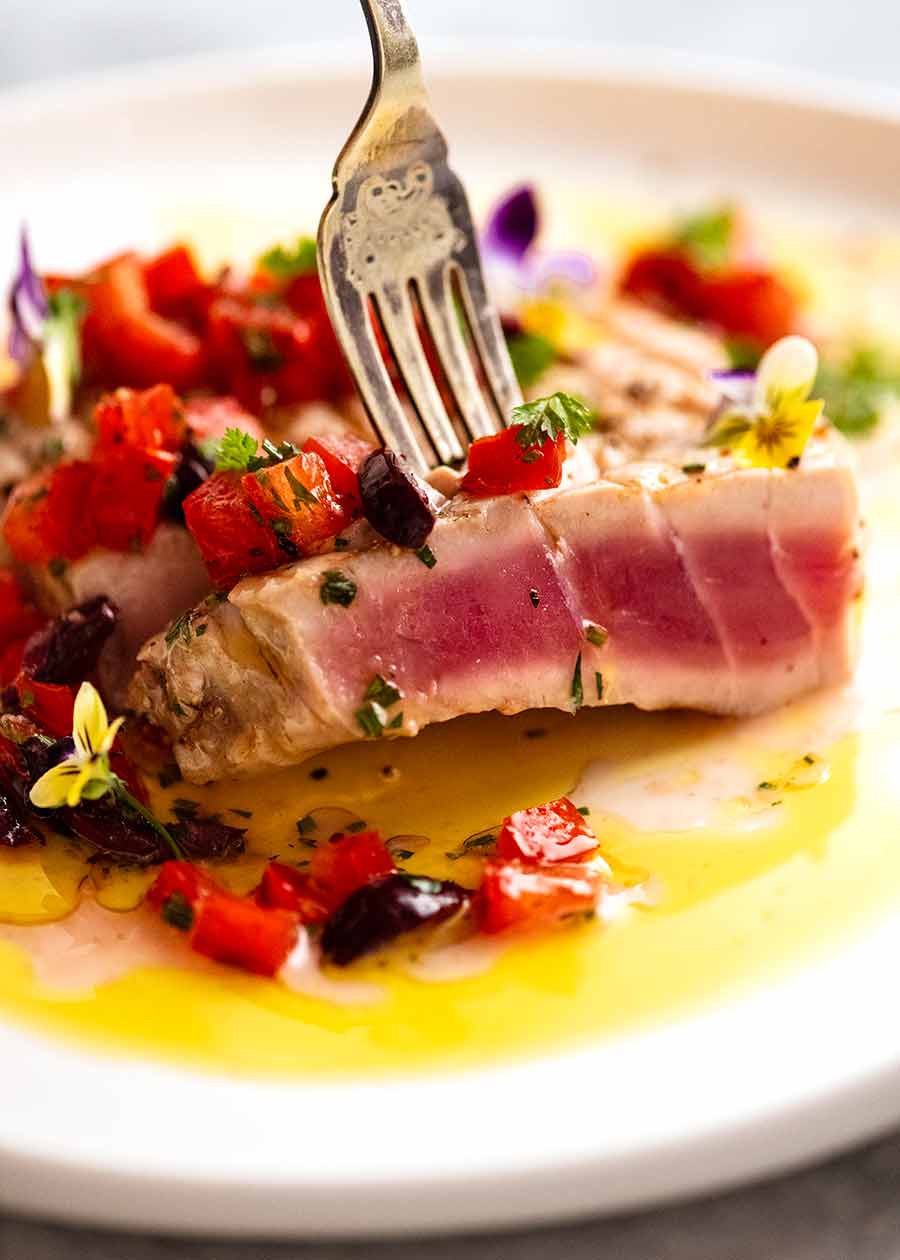 The perfect Tuna Steak is seared on the outside and deliciously rare on the inside. Cooked in 2 1/2 minutes flat, it’s also possibly the fastest fish recipe ever!

I’m serving this tuna with a vibrant and fresh Sauce Vierge, a light French sauce that’s a modern classic for all the right reasons. Healthy, quick and easy, this Tuna Steak also makes for stunning presentation. Looks, taste, speed and elegance – this fish recipe ticks all the boxes!

There’s a reason why tuna is so highly prized by the most elite restaurants around the world. The belly is sought after for its rich and fatty flesh, while the loins – which we’re using today – have a silky texture and a savoury, clean flavour that isn’t at all “fishy”. The jewel-like hue of the loin meat meanwhile is beautiful and the basis for many a stunning-looking dish.

You’ll often see tuna loin used raw for delicate canapés and starters such as tataki, carpaccio, tartare and ceviche, to name a few. The belly meanwhile is coveted especially for sashimi. Tuna is the star of the world-famous daily tuna auction at the Tokyo fish markets, where whole tuna can sell for mind-boggling prices. (The first bluefin tuna of the season is especially known for drawing outrageous bids for the publicity, and the current record stands at over $3 million for a 278 kg (612 lb) tuna – that’s over $10,000 / kg!!!

Such is the appeal and demand for quality tuna today. But ordinary folk like you and me don’t need to pay crazy prices for tuna for our purposes today!! Good quality, fresh tuna steaks are readily available from your local fish monger and are just fine!!

Should tuna steak be raw in the middle? Yes!

This is because tuna steaks are cut from the loin of the fish. This part of the tuna, identifiable by its even, translucent pink or red colour with little fat, is lean. Once cooked, it tends to become quite dry – think of canned tuna and the texture it has. It’s a bit like overcooked chicken breast! As much as we love our canned tuna, we don’t want to eat a whole steak of that!

Serving the tuna with a rare (raw) centre ensures the inside remains tender and succulent. Tuna that is medium or well done will start to resemble our friend the canned tuna – except without the canning oil that conveniently makes up for that dryness!

Different types of tuna have different qualities and culinary uses. Pictured in today’s recipe is yellowfin tuna which is the most common type of tuna sold at fish mongers here in Australia. It’s an excellent all-rounder tuna with a mild flavour, used for everything from sashimi / raw to canning.

The other main types of tuna you might come across are:

What you need to cook tuna steak

Here’s all you need to cook tuna steak: fresh tuna, salt, pepper and oil. (Let’s pretend I didn’t forget the oil in my photo, despite being one of just three ingredients!

Because tuna steak is best served rare inside, it’s important to ensure the tuna is fresh. It doesn’t need to be “sashimi-grade”, which is the quality required when serving the tuna entirely raw, such as with Poke Bowls, Ceviche, Tartare or as sashimi and sushi (the last two recipes are on my mother’s website, RecipeTin Japan). However, it does need to be very fresh.

And it’s super-easy to tell – just smell and touch it:

How to tell tuna steak is fresh

Trust me, you will know as soon as you smell it if it is fresh – or not! (PS There is absolutely no shame at all in asking the fishmonger to pass the tuna over the counter so you can smell it. I personally insist on it. Fish is expensive!)

How to cook tuna steak

The trick to cooking tuna steak perfectly is a screaming hot skillet so you can sear the outside nicely while keeping the inside raw. It has to be super-hot because it’s only on the stove for 2 1/2 minutes!

Being a relatively mild flavoured fish, tuna lends itself for all sorts of possibilities when it comes to a sauce. Bright and fresh sauces and accompaniments work best with this tuna, rather than very buttery or creamy type sauces (like this Lemon Cream Sauce for Fish).

Here are some suggestions:

There’s just a few ideas to get you started!

Sides to serve with Tuna Steak

As for sides, it really depends which way you go with the flavours. Generally I’d opt for lighter sides to keep with the fresh vibe of the tuna and sauces. Here are some suggestions:

Scrolling back through everything I’ve written, this seems like an unusually long post for a recipe that supposedly takes 2 1/2 minute flat to cook!

Truthfully, I just want you to feel confident when you decide to try this recipe. So I have walked through all the information I thought you might want to know, even if you’ve never cooked tuna steak before.

I hope you find it useful, and more importantly that it looks so delicious that you can’t resist giving it a go! Remember, tuna steak is:

A unique and delicious fish

Fine dining-worthy, but still affordable and can be done at home! 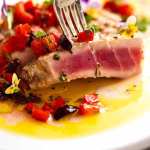 Plating up – with Sauce Vierge (pictured):

1. Tuna: 2. Serving – Pictured in post with , a classic French salsa / vinaigrette which is particularly good with fish. Other ideas:
3. Rack on tray – I normally don’t insist on a rack (normally I just use a plate) but for tuna steaks I do, because air circulating under the steak means the tuna retains less heat. This discourages “carry over cooking” to minimise the danger of the tuna overcooking while resting. 4. Oiling pan – It is best to heat the skillet without oil because it will otherwise smoke terribly. If your pan is not well-seasoned, you can brush the pan with oil along with the fish. Only brush with oil once already hot. If you brush the hot pan, you need to ensure you have a heat-proof brush. Otherwise, take the pan off the stove and spray with oil (never spray a skillet over a lit gas stove –  the oil can catch fire easily). 5. Cook one steak at a time – Tuna can go from rare to medium in 30 seconds, so even handling two tuna steaks can be tricky when you are seeking “perfection”! So I cook one tuna at a time when I want to ensure it cooks perfectly inside, and also when I want (near!-) perfect grill lines. It takes 2 1/2 minutes to cook and the inside is rare anyway, so it’s fine to do them one at a time. 6. Doneness of tuna – It is uncommon to see tuna steaks cooked any more than rare inside because it’s such lean meat. It tends to be quite dry if it’s anything beyond medium rare. 7. Slicing and serving – This is optional. It makes for nice presentation and is a way restaurants plate up tuna steak nicely. It also makes it easier to eat. It’s easiest to slice when the outside of the tuna has cooled otherwise it is prone to crumbling. TIP: Hold the edges of the tuna together when slicing, to avoid the cooked part from breaking. Best served at a tepid temperature. If you serve it hot, the temperature difference between the outside and inside can seem jarring when you eat. 8. Nutrition per tuna steak, tuna only, ie. no sauce.