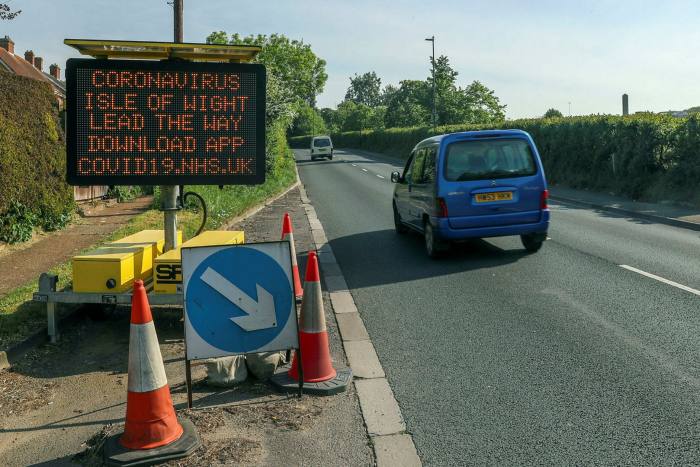 The UK is prepared to adapt or replace the smartphone contact tracing app it has developed for coronavirus if a trial on the Isle of Wight proves that necessary, communities secretary Robert Jenrick said on Sunday.

His comments came after residents on the Isle of Wight encountered problems with the NHS app during the trial that began last week, including some smartphone users receiving alerts that they had been in contact with people suffering from Covid-19, even though they had not gone outside.

The Financial Times reported on Friday that the NHS has begun developing a second contact tracing app after privacy campaigners and technology experts raised concerns about the first one.

The second app will use technology provided by Google and Apple and is being developed in parallel with the first one, in case the government decides to make a switch, according to people briefed on the project.

Asked several times on the BBC’s Andrew Marr Show whether the government was preparing to replace the first NHS app, Mr Jenrick said he was not aware of a second one.

“But . . . if we need to adapt our app or move to a different model obviously we will do,” he added.

Mr Jenrick said the government was learning lessons from other contract tracing apps elsewhere in the world.

“If we need to change our app we will do,” said Mr Jenrick. “That is the point of piloting this before we take it national.”

The UK needs a robust regime for testing people suspected of having Covid-19, and tracing those who have come into contact with them, as part of plans to combat the disease and fully exit the lockdown.

The NHS app being trialled on the Isle of Wight is meant to enable smartphone users who have come into contact with someone who has the virus to receive an alert that would enable them to then self-isolate.

But there have been immediate teething problems, according to residents who have been trailing the app.

Among the most serious were alerts that people reported receiving from the app on Friday, notifying them that they had been in contact with someone infected with Covid-19.

This was despite their not having ventured outdoors since downloading the app when it became available to residents the day before.

“A lot of people have had alerts,” said Jo Jones, who works for an education company on the Isle of Wight. “My dad’s neighbour’s phone went off twice in the night to say she’d been in contact with someone. She hadn’t been out.”

Like many islanders, Mrs Jones shrugged off concerns about how the government might use the data it secured from the app, saying she wanted to help rid the country of Covid-19.

She and other residents were more worried the app would lull the population into a false sense of security.

Cases of Covid-19 are rising on the Isle of Wight, and reached 155 on Saturday. “We have a lot of old people. A lot don’t even have mobile phones,” said Mrs Jones.

Even if they do, the app won’t necessarily work, according to Alice McNab, a former IT project manager who now works for a letting agency.

“Everyone I have spoken to, the majority of whom like me are keen to be part of it, has had trouble downloading,” she said, adding that friends had also reported the app was running down their phone batteries.

More troubling was that the app did not work on phones more than three years old that use Google’s Android operating system.

Vix Lowthion, a school teacher and former parliamentary candidate for the Green party, said she wanted to understand the government’s criteria for success with the trial.

Government eyes flexible furlough extension to get UK back to work

‘Phase out furlough scheme or risk surge in unemployed’

Tips for Small Businesses to Encourage a Healthy Workplace

Can robotics actually improve creativity in the kitchen?

4 Things To Do When Moving In A Hurry