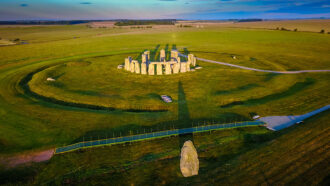 Land surrounding the site of what was once an ancient village in Great Britain turned up a huge surprise: massive underground shafts. Surrounding the town, the formation has a diameter of more than two kilometers (1.2 miles). Each hole has straight sides and is filled with loose soil.

The shafts date to a time known as the Neolithic, or late Stone Age. They were dug more than 4,500 years ago near another ancient site of far greater fame — Stonehenge. Over the millennia, the shafts filled with dirt and became overgrown. From the surface, you wouldn’t know they were there.

Archaeologists had known since 1916 that some holes lurked underground. They suspected they were small sinkholes. Or maybe they had once been shallow ponds to water cattle. Ground-penetrating radar now has revealed that these were no cattle ponds. Each hole goes down five meters (16.4 feet) and spans 20 meters (65.6 feet) across. So far 20 holes have been found. These are, researchers now think, part of one of the biggest Neolithic monuments in Europe.

Researchers from the University of Bradford in England made the discovery. They were part of a Stonehenge Hidden Landscapes Project. This is a partnership of several universities and research organizations. A paper describing their find was published June 21 in the online journal Internet Archaeology.

The shafts surround the site of a Neolithic village called Durrington Walls. The village is three kilometers (about two miles) from Stonehenge. The builders of Stonehenge had lived — and partied — here while they erected the giant stones. Durrington Walls has its own henge. A henge is a wide ditch bounded by a bank of earthen work. It usually encloses a special site.

Builders had positioned he massive stones at Stonehenge to line up with the sun during each solstice (SOAL-stiss). Researchers are not sure why Stonehenge was built. Most agree, however, that it had some religious purpose. The purpose of the Durrington Walls shafts are equally mysterious.

Vince Gaffney is one of the researchers who made the new discovery. He thinks the arrangement of the pits — in a circle surrounding the henge — might mean they marked the boundary to some important space.

Stonehenge has a similar boundary — one often called the Stonehenge Envelope.

Burial mounds surround Stonehenge. Because the space is so clearly marked, archaeologists think only a few special people may have been allowed to enter Stonehenge’s central space.

But there are differences, too, between the two sites. Stonehenge, with its burial mounds, is about the dead. In contrast, Durrington Walls is about the living. It was where people lived and feasted while they erected Stonehenge.

The newfound shafts around Durrington Walls suggest it also was a special, sacred place, Gaffney says.

The pits’ arrangement may be telling as well. They form a circle around the Durrington Walls henge. Each hole is spaced roughly the same distance from the central henge at Durrington Walls. Gaffney says this probably means the people who dug the holes paced them off. This would have required some kind of counting system, he notes.

In any case, he says, these enormous excavations show that “early farming societies were able to carry out massive construction projects at a much larger scale than we realized.”

Penny Bickle is an archaeologist at the University of York in England. She specializes in this period but wasn’t involved in the new discovery. People living back then often created monuments to frame views of natural features, she says. These features might be hills or water. The Durrington Walls monument may similarly have been some Stone Age way of celebrating nature.

Bickle’s less sure that the Durrington Walls pits point to anything new about a counting system, however. “Other sites and artifacts from that period suggest a similar understanding of measurements,” she says.

What’s next? Looking for more pits, says Gaffney. “We haven’t found them all,” he suspects. The ones they’ve found shape an arc, not quite a full circle. So, he says: “We need to keep surveying.”

The 5 Possibilities For Life On Mars

Scientists May Have Just Found The Youngest Neutron Star Ever

Will Future Humans See A Better Pole Star Than Polaris?

Witness Mars From The Perspective Of Every Successful Lander...

You should guess answers to your homework before searching...