Orbis is an NGO that focuses on promoting eye health in developing countries. What you may not know… 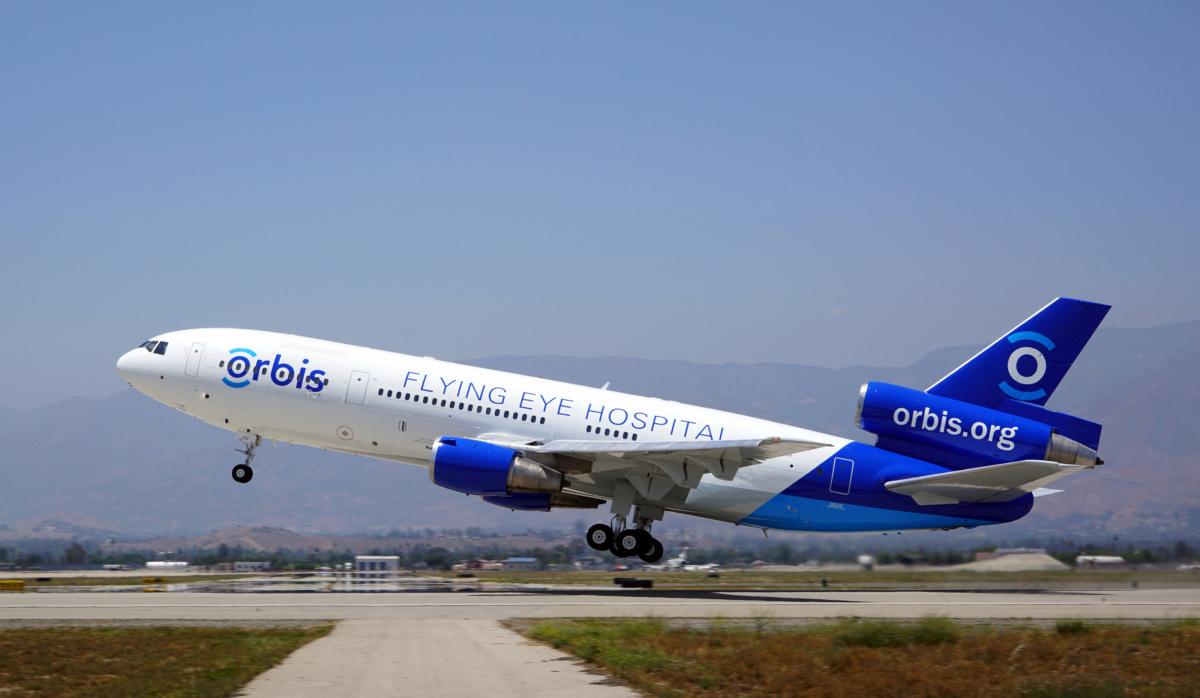 Orbis is an NGO that focuses on promoting eye health in developing countries. What you may not know is that the NGO operates an MD-10 that is also used as an eye hospital.

Orbis had intended to showcase its one of a kind aircraft at this year’s Farnborough Airshow. However, the event was unfortunately called off. To make up for this, Simple Flying decided to take a look at the former freighter.

Orbis is currently using its third flying eye hospital. The aircraft is a McDonnell Douglas MD-10 currently registered as N330AU. The three-engined cargo aircraft is 47.2 years old. According to Planespotters, it was delivered to Trans International Airlines on the 19th of April, 1973.

In April 1984, FedEx acquired the aircraft and continued to operate it until it was withdrawn from use in January 2010. However, rather than scrapping the aircraft, FedEx donated the plane to Orbis, its current operator.

The aircraft’s cockpit was upgraded in 2001. This digitized the avionics to comply with FAA requirements. During the conversion, the flight engineer’s station was removed, and it became possible to operate the aircraft with just a pilot and a first officer.

The MD-10 has a unique interior comprising of several modular sections. At the front of the aircraft is a classroom. Here, 46 seats are configured as a passenger cabin. When the aircraft if flying, it accommodates those traveling with the aircraft. However, when on the ground, the cabin is transformed. Local doctors are invited to come on board the plane. As space in the operating room is limited, they can watch live surgeries and take part in workshops here.

Just behind the classroom are two office type rooms. The first is used for administration, but the second houses the audiovisual room. The aircraft is equipped with 14 cameras throughout. The audiovisual room controls all of these cameras, feeding them through to the classroom. This allows the invited doctors to witness a patient’s entire journey from start to end.

The next room in the aircraft is the patient care and laser room. Here, staff have three treatment machines to perform laser eye surgery. Additionally, diagnostics, treatment, and surgical interventions are carried out here.

Between the laser room and the operating room is an observation room. This is another place where visitors to the aircraft can witness what is taking place in the adjacent rooms. Orbis has produced a 3D Video of the aircraft. By clicking and dragging, you can pan around each image:

The main attraction of the MD-10 is its state of the art operating room. Located behind the observation room, this is where sight restoration surgery takes place. Orbis has strategically located the operating room over the aircraft’s wing box. This gives it optimal stability. The NGO describes the room ‘technologically advanced’ and ‘cutting-edge,’ and this room is also used to train local doctors.

Behind the operating room is a sterilization room. Here, local nurses are taught how to sterilize equipment safely, use tools, prevent infections and scrub correctly.

Last but not least is the aircraft’s pre and post-operative care room. The room has two areas. In one part, patients are prepared for their surgery, while in the other part, patients recover following surgery.

The Flying Eye Hospital is almost self-sufficient while on the ground. Indeed, it carries many modules in its belly while flying. These include generators, air conditioning units, and other essential systems. These are mounted to standard-sized pallets, meaning they can travel with the aircraft.

In terms of power, the aircraft only requires a ground power unit for the three hours after arrival and before departure while its own GPU is being loaded or unloaded. A few other resources are needed at the destination airport, such as stairs, and equipment to load and unload the aircraft.

The aircraft is now neither a cargo aircraft nor a passenger aircraft. Instead, the plane is flying around the world, taking doctors and necessary medical treatment to developing countries. As we saw, the aircraft has a unique interior. As such, it will spend up to three weeks in any one location when undertaking a project.

The NGO focuses its operations in Africa, Asia, and Latin America, because 90% of blind people live in developing countries. However, for Orbis, it isn’t as easy as just picking a country and flying there.

The organization first needs to be invited to a country. It can take up to two years between receiving an invitation, and a project going ahead. Finally, the aircraft operators need permission to enter a country and to park up at the destination airport for two to three weeks.

In 2019 the aircraft operated five projects. While the projects may only last two to three weeks, the aircraft may remain at a location for longer, as was the case in Hue. The 2019 projects were:

The aircraft is currently in Fort Worth. As a result of the current situation, the aircraft is presently grounded until at least the end of June.

You can read more about Orbis’ work on their website at www.orbis.org.uk.

Have you seen the Flying Eye Hospital? What do you think of Orbis’ work? Let us know your thoughts in the comments below!

What Happened To The Twin Fuselage Stratolaunch With 6...