Discarding all the materials people use to protect themselves from COVID-19 has created a growing environmental problem. 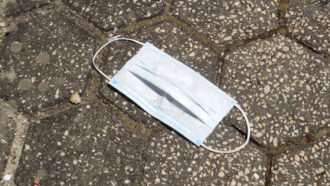 Tanveer Adyel began to notice the trash in March. This was early in the COVID-19 pandemic. He saw latex gloves and blue, disposable masks littering his garden and street. Other types of personal protective equipment, or PPE, including face shields, were also among the trash. Soon, he spotted lots of thin plastic bags from grocery stores. Those bags had been banned in his state the previous year.

Adyel is an engineer at Monash University in Melbourne, Australia. He studies the impact of tiny pieces of plastic — called microplastics — on the environment. Melbourne city workers tried to keep up by emptying overflowing trash cans. The problem, however, has continued to grow.

People produce, consume and throw out a lot of stuff. In 2018, U.S. residents sent some 146 million tons of garbage to landfills. That’s a little more than 1 kilogram (2.2 pounds) per person, every day. Environmental groups warn that COVID-19 is worsening a growing tidal wave of trash.

Reports from around the world suggest coronavirus pollution is becoming a global issue. In Hong Kong, for instance, surgical masks and gloves litter hiking trails and wash up on beaches. Clean-up crews on beaches in the United Kingdom have reported surges in discarded takeout containers and hand-sanitizer bottles. Cities such as Aspen, Colo., have reported a flood of cardboard boxes. It has grown as people stay home and rely on delivery services like Amazon. By April, many U.S. cities had reported dramatic increases in demand for trash pickups and recycling.

COVID-19 began as a public-health crisis. It still is. As of late January, more than 2 million people had died. Some 100 million had been diagnosed with the infection. But now the pandemic is driving an environmental problem, too.

“Everyone has to focus first on how to survive, of course. And PPE can save us,” Adyel acknowledges. “People are using this to protect themselves. And it’s a great achievement. But we can definitely see a problem in the environment — and it will last for years.”

The pandemic completely changed how many people shop. Some spent less money. Often, people switched to buying products online that could be delivered to their homes. As a result, people spent less money at in-person stores during the first half of 2020 than they did the year before. That’s according to the U.S. Department of Commerce.

“Online shopping is becoming a vital part of how Americans engage in social distancing,” points out Heidi Brock. She leads the American Forest & Paper Association. Based in Washington, D.C., it includes most U.S. companies that make paper products, including cardboard boxes.

During the pandemic, Brock notes, companies have produced about 4 percent more of the material used to make cardboard boxes. In-person stores don’t need as much cardboard as last year, she says. The extra is going to home deliveries.

Cardboard boxes are made to be recycled. Their fibers can be “used at least seven times to make new paper products,” Brock explains. In fact, paper has the highest recycling rate in the United States. Last year, more than two-thirds of all U.S. paper was recycled.

But the pandemic may cut that rate. The Solid Waste Association of North America, or SWANA, includes companies involved in trash and recycling. These centers often require workers to stand together to sort through materials. That can increase a risk of COVID-19 transmission.

In June, SWANA reported that many local governments had paused recycling programs in the spring of 2020. Those closures likely sent more cardboard and other recyclable materials to landfills. Some facilities temporarily closed to install new plexiglass barriers and other protective devices. Many of these have now reopened.

The virus that causes COVID-19 was first detected in the large city of Wuhan, China. This also was among the first places to report big pollution problems. Before the outbreak, Wuhan hospitals and clinics produced nearly 41,000 kilograms (45 U.S. tons) of medical waste. This includes anything tainted with germs, including PPE. But between February 15 and March 15, when COVID-19 infections peaked there, Wuhan produced almost 224,000 kilograms (247 tons) per day. That’s about the same weight as 100 extra-large pickups. More than 20 other cities in China faced a similar problem.

Before the pandemic, U.S. hospitals in the United States produced about 2.3 million kilograms (2,500 tons) of medical waste per year. If these hospitals followed the same pattern as in Wuhan, they would produce a year’s worth of waste in only two months!

Medical waste isn’t just a trash problem. Some experts estimate that more than 5 million people die every year from diseases spread through medical waste. This is especially true in low-income countries. And those numbers came from before the new pandemic.

The COVID-19 virus is usually transmitted from person to person. However, one study that included scientists with the National Institute of Allergy and Infectious Diseases in Hamilton, Montana, found that this virus can live on cardboard for about a day. It can live on plastic for up to three days.

Plus, plastic is the main ingredient in almost all PPE equipment. Many hospital gowns, masks, face shields and gloves contain it. (That includes the thin, soft, single-use masks that almost feel like paper or cloth.) Plastic decomposes over hundreds of years. That means the same PPE that today is washing up in gardens, overflowing in landfills and sinking in the ocean could be a problem for our great-great-great-great-great-great-grandchildren. And their grandchildren as well.

Plastic is not fantastic

The plastic problem is not limited to medical wastes. “COVID-19 has changed our patterns of consumption,” says Joana Prata. An environmental researcher, she works at the University of Aveiro, in Portugal. During the pandemic, people have bought more packaged foods and takeout meals. To try to avoid contamination by the virus, she says, people have used plastic grocery bags once and then thrown them away.

Even before the pandemic, though, the world had a plastic problem. Some 5 trillion pieces of plastic float in the world’s oceans. According to a study published in 2017, only 9 percent of all plastic ever made has been recycled. About 12 percent has been incinerated. The rest — 79 percent — remains in landfills or in nature.

But COVID-19 isn’t helping. Because the virus can live on plastic for up to three days, most protective equipment should be used only once before being thrown away. Prata and her team estimate that the world now uses some 129 billion face masks and 65 billion gloves every month.

As many cities have come out of lockdown, Prata notes, some are restarting their recycling programs — including for plastic. At the same time, many places still require protective masks. “And disposable masks remain popular,” she says. “Large quantities are being used on a daily basis around the world.”

We won’t know the extent of the pollution problem until after the health crisis has passed, Prata says. But the scale of contamination is going to be big. Like Adyel, she studies how microplastics affect the environment. As masks, gloves, shields and gowns break down, they’ll produce a deluge of tiny plastics. Those plastics can be poisonous to wildlife and hard to clean up.

“This high consumption has not yet been addressed,” she says. “It leaves a lot to be studied in the post-pandemic.”

Scientists have proposed a number of ways to confront the growing pollution problem, Adyel notes. One solution is burning. In Wuhan and elsewhere, much of the PPE and medical waste has been incinerated. But medical waste may be infectious. So it has to be burned in special containers that release heat without sending solids into the air.

At Texas A&M University, in College Station, for instance, researchers have converted a storage container into a PPE sterilizer. It works by bathing the masks in plasma, which is an electrically charged gas. Studies have shown that plasma quickly kills coronavirus particles. Other new systems are using heat to do the same thing.

However, Adyel remains grim in his forecast. High-tech sterilizing approaches might work but only on small batches. The pandemic’s plastic pollution problem may be too big, he says, to be fixed in such small ways. Meanwhile, burning can create other environmental problems. It can increase greenhouse gases, for instance, or throw other pollutants into the air.

Prata, in Portugal, agrees that the plastic wastes made of PPE and packaging will be an environmental challenge. But she sees an even bigger problem looming.

The biggest challenge, she suspects, “will be reversing the new habits.” During the pandemic, people have become re-accustomed to single-use plastics. Governments have relaxed regulations on plastic-bag use and recycling. These behaviors and policies may be hard to reverse.

There are things individuals can do, too. Some communities run citywide projects to clean up waste (though not medical waste). Brock says it’s important for people to get back in the habit of recycling everything that can be recycled, including cardboard. “Remove any non-paper packing materials, break boxes down flat, keep them dry and clean and place them in the recycling bin,” she says.

She also offers advice on the age-old debate over pizza boxes: Recycle it, she says. “Grease and cheese are not an issue for recycling,” she says. “Simply remove the leftover pizza, and put the box in the bin.”

This won’t be the world’s last pandemic. That’s why Prata hopes scientists and policymakers can learn from it. In new crises, she says, we can learn to forge new solutions.

“We need to produce better plans and strategies on how to deal with emergencies,” she says, without getting in the way of long-term environmental goals.

Physicists have clocked the shortest time span ever

What Is The Most Common Type Of Planet In The Universe?

Is The Matter In Our Universe Fundamentally Stable Or Unstable?

Should You Explain To An Expert Why Their Professional...

If The Big Bang Wasn’t The Beginning, What Was It?