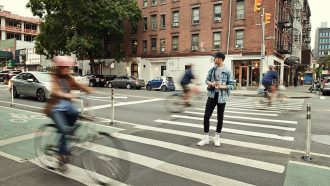 Tobacco and other pollutants don’t just stink up the air. They also alter immune cells in ways that could hurt the body. Some can raise blood pressure, even in kids. That’s the finding of three new studies.

Taken together, they show that dirty air does not just pose risks to the lungs. It also threatens the heart and body’s ability to fight infection.

One study analyzed 221 young kids living in Fresno. This central California city ranks among the nation’s most polluted. In the American Lung Association’s annual State of the Air report, “they get F’s all the time,” says Mary Prunicki. She’s an immunologist at Stanford University, also in California.

Her team wanted to see how that pollution affects child health. So they collected blood and took blood-pressure readings from Fresno kids. Each was six to eight years old. The researchers also collected data from stations that monitor air pollution. This helped them figure out how much pollution each child had likely been breathing.

Among kids exposed to higher pollution levels, DNA in their immune cells showed chemical changes. The changes reflect the addition of a chemical group (a carbon atom attached to three hydrogen atoms). Once in place, these chemical groups act like genetic switches. They’re called epigenetic, for “above” the gene. That’s because they influence how genes work without altering their DNA. Epigenetic changes can later be inherited.

Explainer: What is epigenetics?

Prunicki’s group found epigenetic changes in four genes that regulate immunity. In fact, the blood in these children also contained fewer white blood cells. And that’s a bad sign. The body produces those white cells to help fight infection and to rid itself of foreign substances.

What’s more, the blood pressure in kids who had inhaled more air pollutants was higher. This suggests their arteries were getting stiffer. That can force your heart to work harder to pump blood. And that puts people at greater risk for heart failure.

The team shared its findings February 18 in Scientific Reports.

Wildfires spew some of the same chemicals, such as ozone and carbon monoxide, that pollute many urban cities. A second new study analyzed blood from people affected by the November 2018 Camp Fire. This was the deadliest wildfire in California history.

This study focused on a specific type of white blood cell. Part of the immune system’s first responders, they are known as innate immune cells. The researchers looked at a group of these cells in bone marrow. They also looked at dendritic cells, which move relentlessly through the lining of the gut. When they find a foreign invader, they spew chemical messengers. These molecules tell the immune system “something bad is going on,” explains Angela Haczku. She’s a physician-scientist at the University of California, Davis.

Her team found that during the wildfire season, the immune cells showed molecular changes typical of inflammation or an allergic reaction. One of her graduate students, Melissa Teuber, reported their findings February 27 at the annual meeting of the American Academy of Allergy, Asthma & Immunology. (It was held virtually this year.)

The immune changes persisted at least two months. They returned to normal within the next two to four months.

Some immune cells in the Fresno kids reacted to certain pollutants right away. Other cells took weeks or months to show changes. It’s unclear if some of these changes might last into adulthood. Scientists also don’t know if moving into an area with clean air would reset the body’s immune system back to normal.

Scientists do know that prolonged exposure to urban air pollution makes people more prone to asthma and allergic disease. It also can shorten lifespan. Cigarette smoking is another source of air pollution. And a third study probed links between it and blood pressure in kids.

The researchers analyzed data from 8,520 U.S. kids who took part in a nationwide health survey. Some were as young as eight. Others were older, up to age 19. The study had measured blood levels of cotinine (KOH-tih-neen). It’s a breakdown product of the nicotine found in tobacco. The researchers also noted whether the kids had smoked, lived with a smoker or had high blood pressure.

Young smokers were more likely to have high blood pressure were than kids exposed solely to secondhand smoke. But all kids with cotinine residues were at elevated risk of having high blood pressure, says Rebecca Levy. She’s a kidney doctor at Montefiore Medical Center in New York City, and led the study. This was true whether the kids actually smoked or had just been around smokers.

“The more nicotine you had in your body, the more likely you were to have high blood pressure,” she reports. And high blood pressure increases risk for strokes, heart disease and kidney problems. Her team published its findings February 23 in JAMA Network Open. In the future Levy hopes to get similar data on vaping. Among kids, “vaping is getting more popular,” she notes. And some e-cigarettes have a “much higher nicotine dose than traditional cigarettes.”

Some Black Holes Are Impossible In Our Universe

Analyze This: Shipwrecks provide a home for bottom-dwelling...

Puberty may reboot the brain and behaviors

Ask Ethan: Will The Cosmic Microwave Background Ever Disappear?

How Earth Day Lost Its Way

By not including everyone, genome science has blind spots