US Capitol locked down amid inauguration security scare

In a measure of how jittery the capital city has become, US Capitol Police on Monday briefly locked down the Capitol complex and paused inaugural rehearsals after a small explosion at a nearby homeless encampment. Two days out from the inauguration, President-elect Joe Biden and Vice President-elect Kamala Harris were joining Martin Luther King Junior Day service projects as a militarised and jittery Washington prepared for a swearing-in that will play out under extraordinary security.

Mr Biden and his wife Jill joined an assembly line in the parking lot of Philabundance, an organisation that distributes food to people in need, and helped fill about 150 boxes with fresh fruit and non-perishables.

As Mr Biden and Ms Harris took breaks from their inaugural prep to honer the civil rights hero, outgoing President Donald Trump remained out of public view at the White House for the sixth straight day. 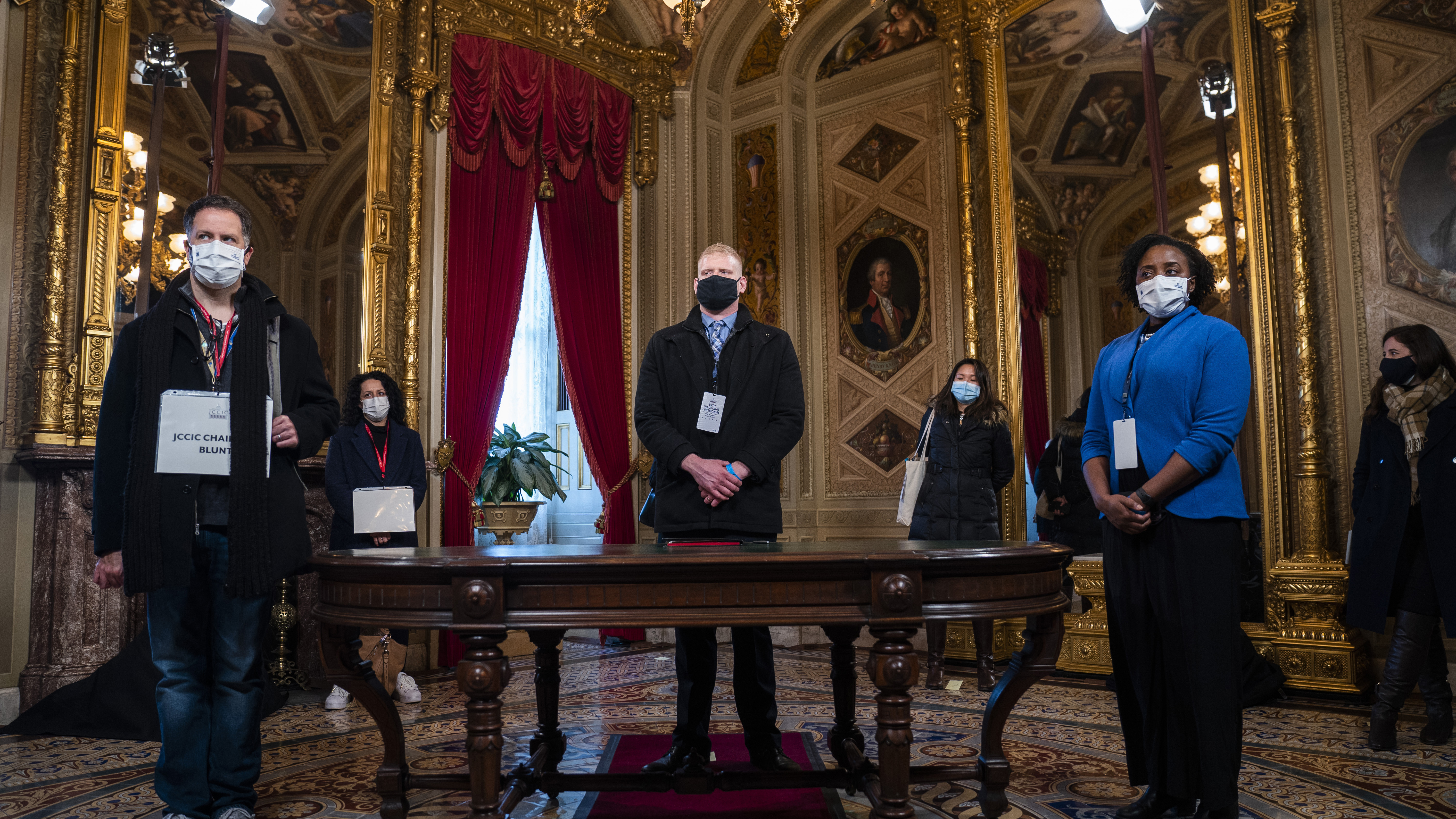 In past years, Mr Trump has marked the holiday with unannounced visits to the King memorial in Washington but no such outing was expected this year.

Such a visit would have been complicated this year since Washington has become a fortress city of roadblocks and barricades ahead of Wednesday's inauguration as security officials work to avoid more violence following the January 6 riot by a pro-Trump mob at the US Capitol. 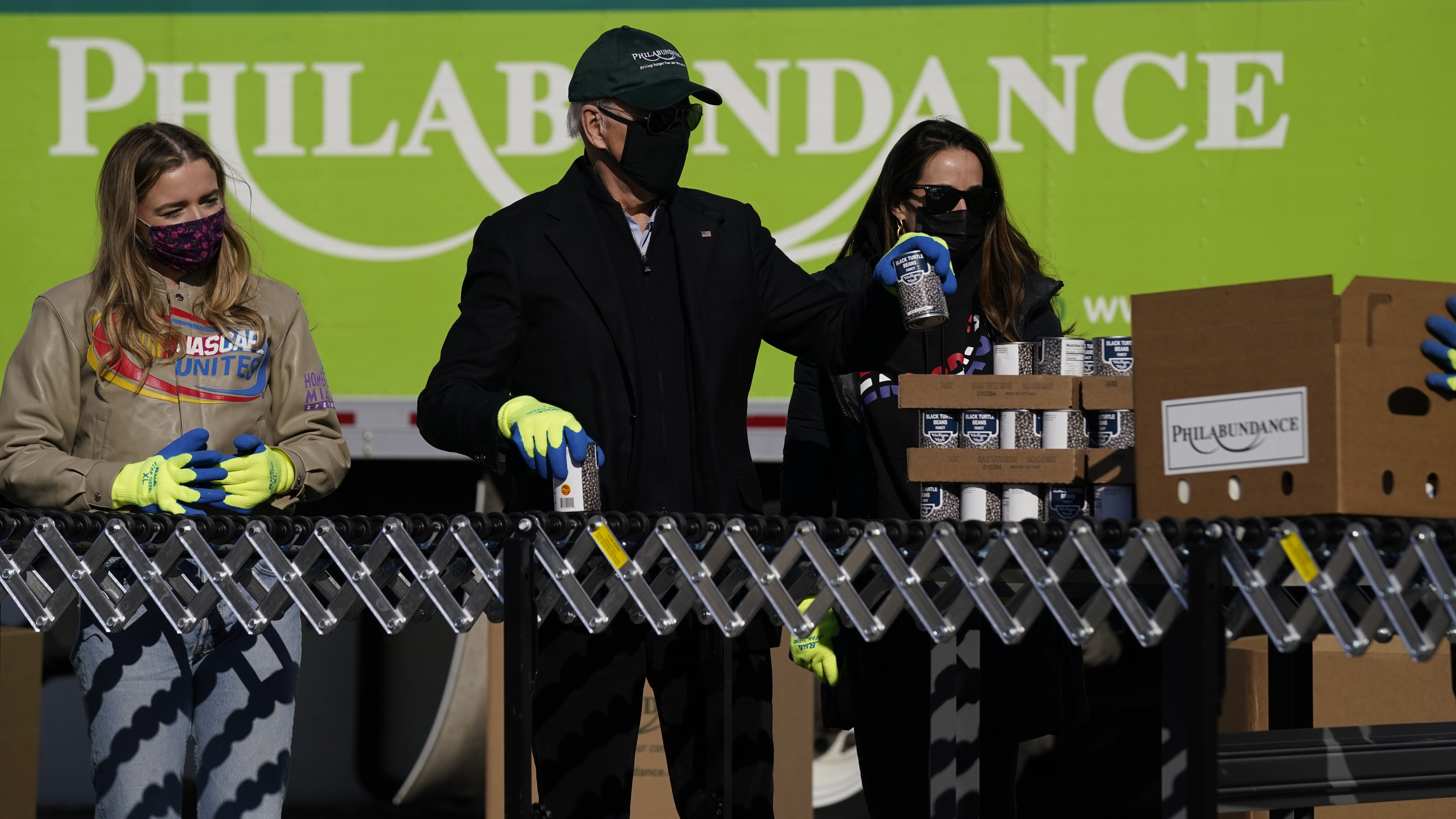 In a measure of how jittery the capital city has become, US Capitol Police on Monday briefly locked down the Capitol complex and paused inaugural rehearsals after a small explosion at a nearby homeless encampment.

Authorities urged staff working inside the complex to stay away from exterior windows and those outside the building to take cover as they briefly prohibited entry and exit from the campus "out of an abundance of caution." The Bidens were joined in their service project by their daughter, Ashley Biden, their granddaughter Finnegan Biden, and Peter Neal, who is dating another Biden granddaughter.

Ms Harris and her husband, Doug Emhoff, were scheduled to take part in a National Day of Service event in Washington.

Ms Harris was expected to resign her Senate seat on Monday afternoon.

More than 20,000 National Guard troops were being dispatched across the city to bolster security. Monuments — including the King memorial — are closed to the public until after Wednesday's inaugural events.

Mr Biden continued to build out his administration.His transition team announced Monday he will nominate Rohit Chopra to direct the Consumer Financial Protection Bureau, tapping a progressive ally of Senator Elizabeth Warren to lead the agency whose creation she championed. 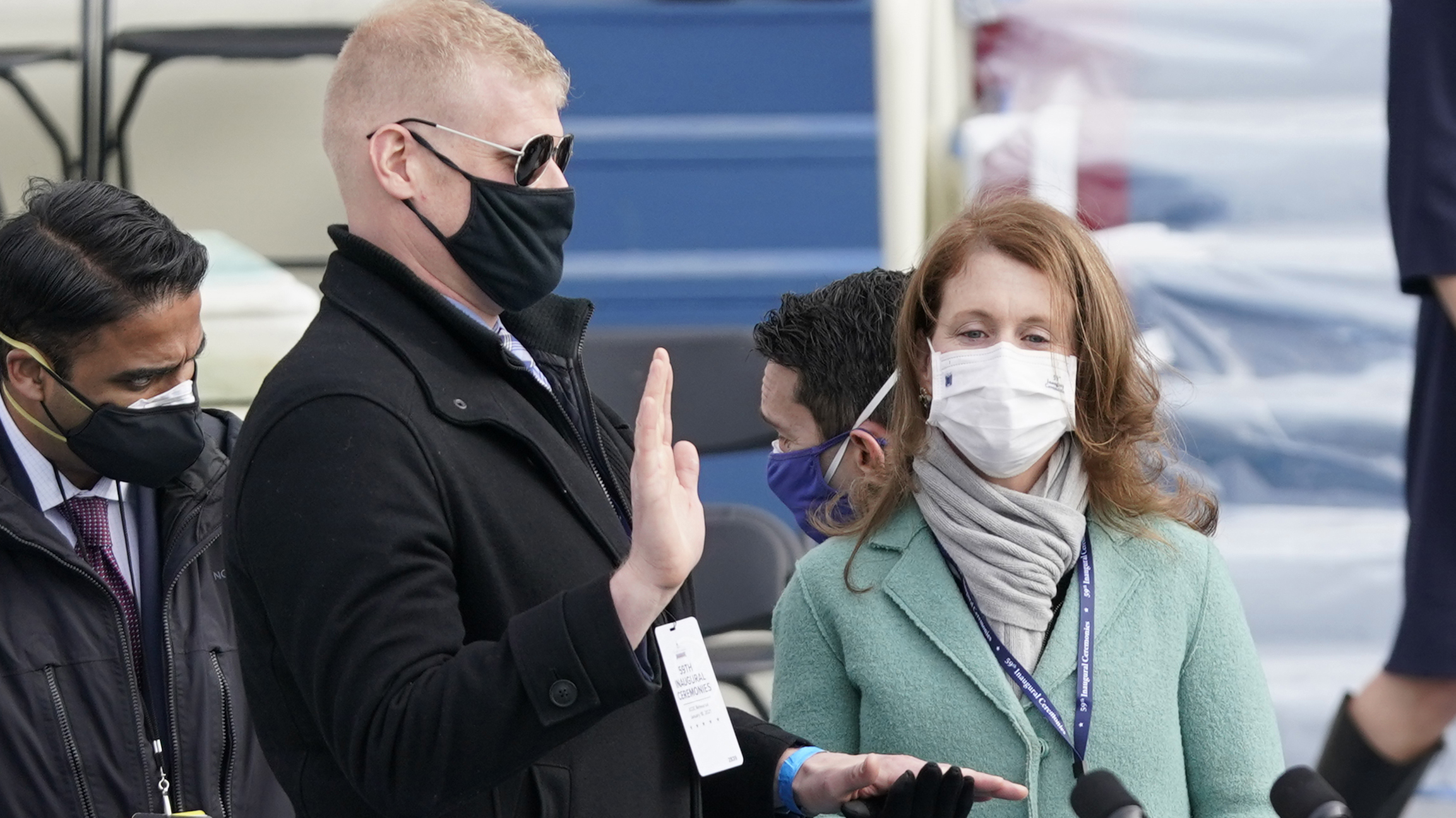 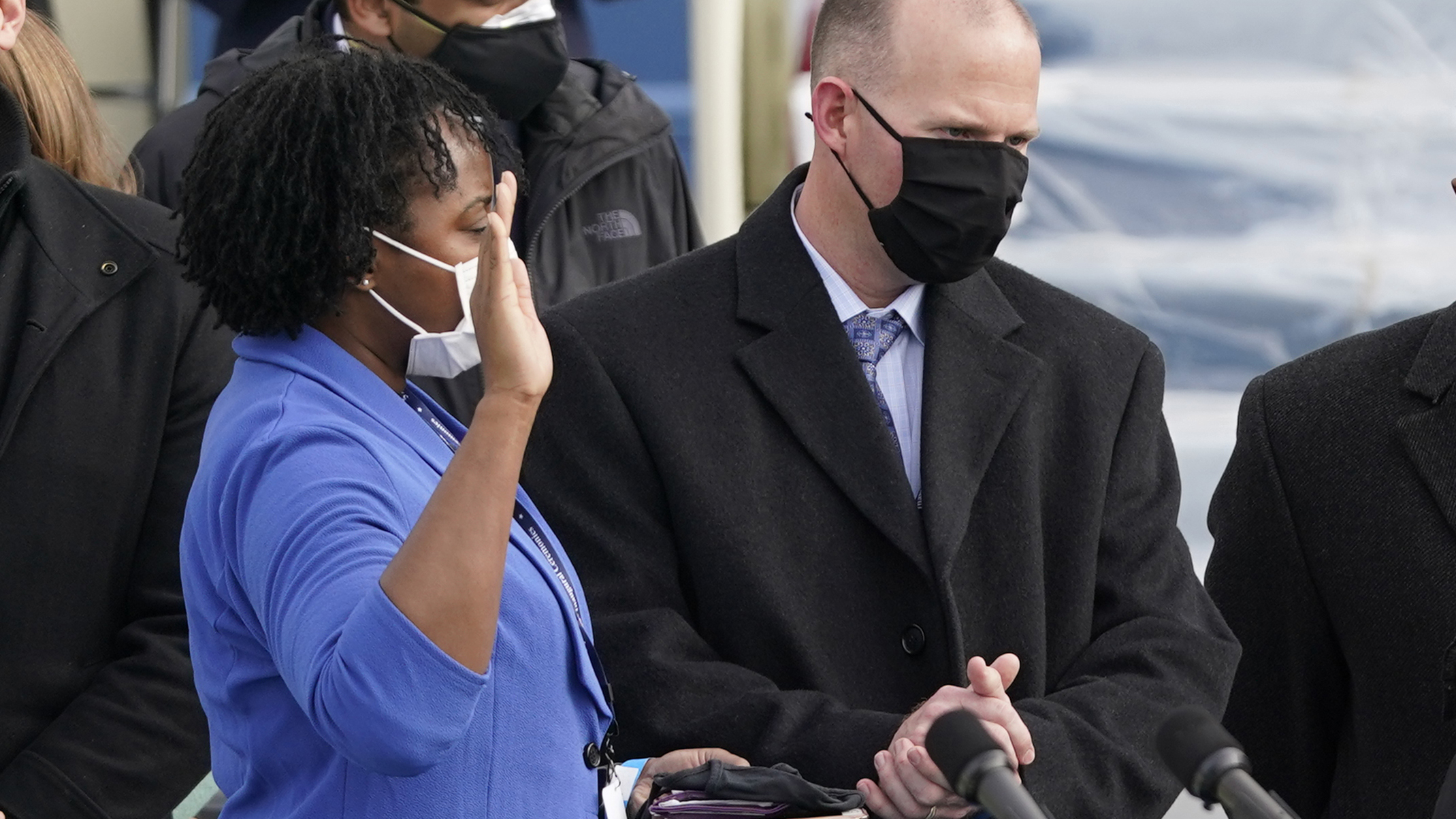 Mr Chopra, a commissioner at the Federal Trade Commission, helped launch the agency after the 2008 financial crisis and served as deputy director, where he sounded the alarm about skyrocketing levels of student loan debt.

The pick comes as Democrats are eyeing ways to provide student loan relief to millions of Americans as part of a COVID-19 relief package. 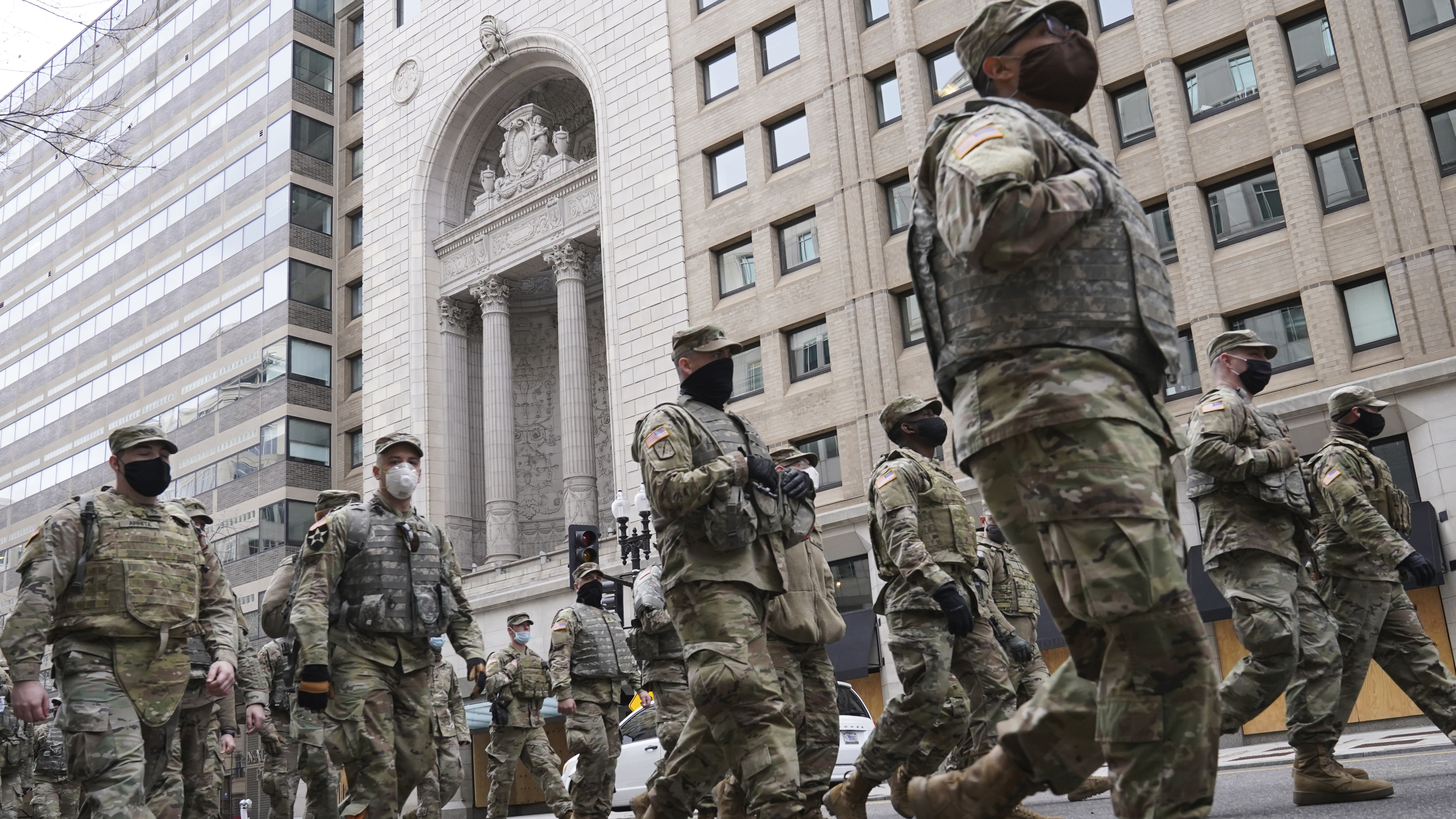 Mr Biden also announced his intent to nominate Gary Gensler, former chairman of the Commodity Futures Trading Commission, as the next chair of the Securities and Exchange Commission.

Inaugural organisers on Monday finished installing some 200,000 small US, state and territorial flags on the National Mall, a sobering display intended to honour the nearly 400,000 Americans killed in the coronavirus pandemic. 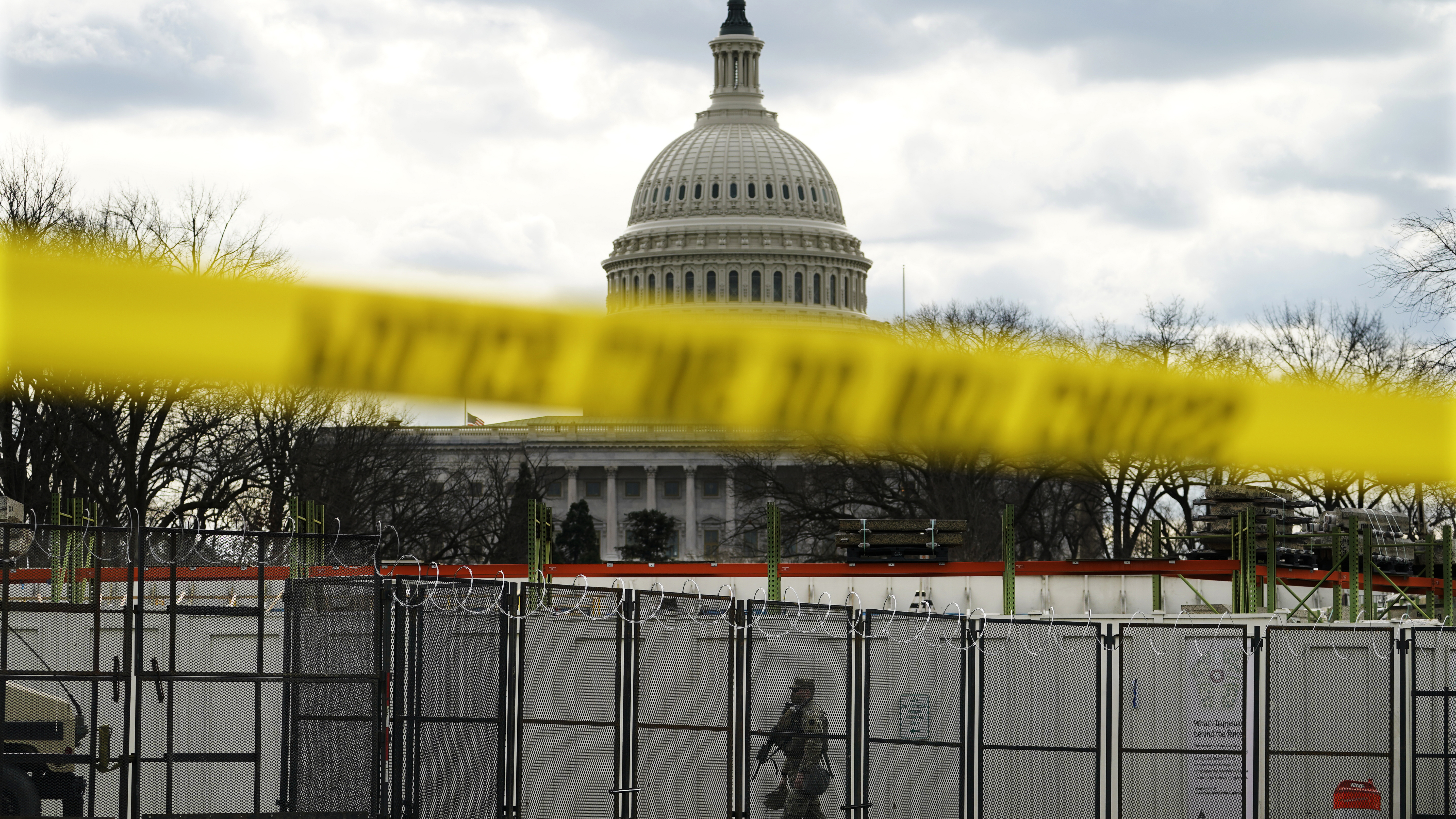 Even before the January 6 insurrection at the Capitol, inauguration festivities were expected to be muted due to the virus.

Mayor Muriel Bowser urged residents to stay away from the city on Inauguration Day.

And instead of the typical inaugural balls, Mr Biden's inaugural committee has recruited artists, including Bruce Springsteen, the Foo Fighters and John Legend to perform from remote locations around the country in a prime-time televised event.

Ahead of the inauguration, the German Federation of Journalists, known as the DJV, warned foreign correspondents covering the event to take precautions and be "particularly careful and alert on Wednesday."

Association head Frank Ueberall cautioned on Monday that "extremist Trump fans have already demonstrated their hatred and willingness to use violence against journalists at the Capitol." "It is appalling that such an appeal is even necessary in the USA, once the model democracy," he added.

Man charged over death of brother on Mornington Peninsula

Man arrested over death of brother on Mornington Peninsula