The bill was passed after an all-night "vote-a-rama" and a 12-hour struggle to get one Democrat to support the party's plan on a critical issue. The US Senate passed President Joe Biden's $1.9 trillion COVID-19 relief plan on Saturday, after an all-night "vote-a-rama" and a 12-hour struggle to get one Democrat to support the party's plan on a critical issue.

The House will vote on Tuesday on the bill to approve changes made in the Senate, House Majority Leader Steny Hoyer announced, and then it will go to Biden to be signed into law. 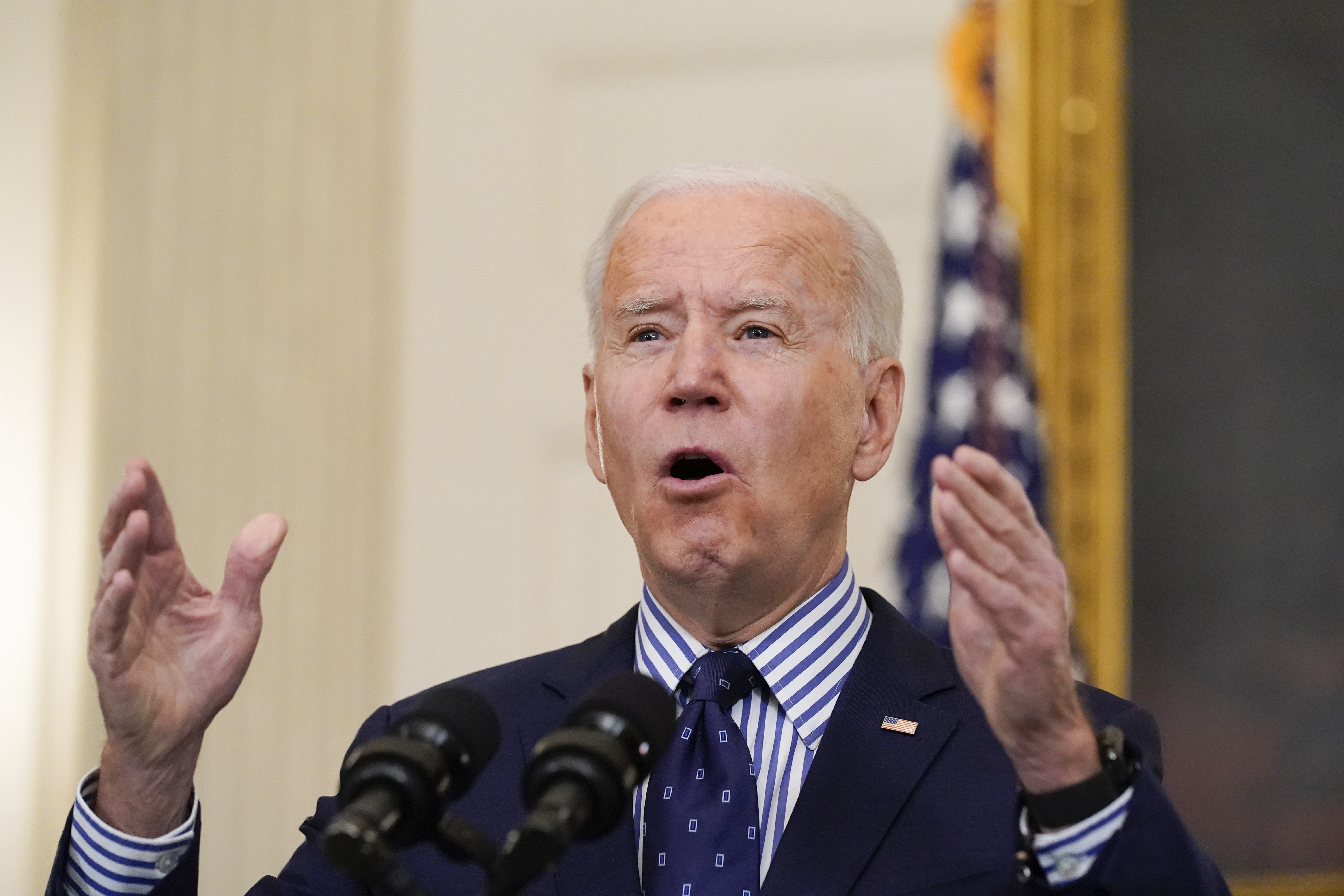 Biden hailed the Senate passage in remarks from the White House on Saturday afternoon, touting his plan's widespread public support even if it didn't earn any Republican votes.

"By passing this plan, we'll have proved that this government, this democracy, can still work. It has to be done. It will improve people's lives," Biden said.

And Senate Majority Leader Chuck Schumer defended the relief bill's passage along party lines, saying it showed the Republicans that they could do it alone.

But Democrats have faced fierce pressure to stay united to pass the administration's top legislative priority before March 14, when jobless benefits are set to expire for millions of Americans. Democrats kept a Senate roll call vote open for 11 hours and 50 minutes - the longest in recent history - as Manchin signaled he would accept the Republicans' less generous proposal.

The dispute was a sign of the centrist Democrat's power in the 50-50 Senate, where Democrats control the narrowest possible majority, and an example of how a single senator can derail the President's agenda.

After a long negotiation on Friday evening, and with a flurry of other amendments to consider, Manchin finally agreed to extend $300 weekly unemployment benefits through September 6, about a month earlier than what Democrats had envisioned.

The West Virginia Democrat also limited a provision to make the first $10,200 in benefits nontaxable apply only to households making less than $150,000.

"We have reached a compromise that enables the economy to rebound quickly while also protecting those receiving unemployment benefits from being hit with unexpected tax bills next year," said Manchin in a statement. White House press secretary Jen Psaki said on Friday evening that Biden "supports the compromise agreement, and is grateful to all the Senators who worked so hard to reach this outcome."

The nearly $2 trillion package includes up to $1,400 stimulus checks to many Americans, and billions of dollars for states and municipalities, schools, small businesses and vaccine distribution.

The Senate passed the bill after a vote-a-rama, a Senate tradition that the minority party uses to put members of the majority on the record on controversial issues in an effort to make changes to a bill that they oppose.

Senate Republicans introduced a number of amendments overnight that were narrowly defeated by the Democratic majority. 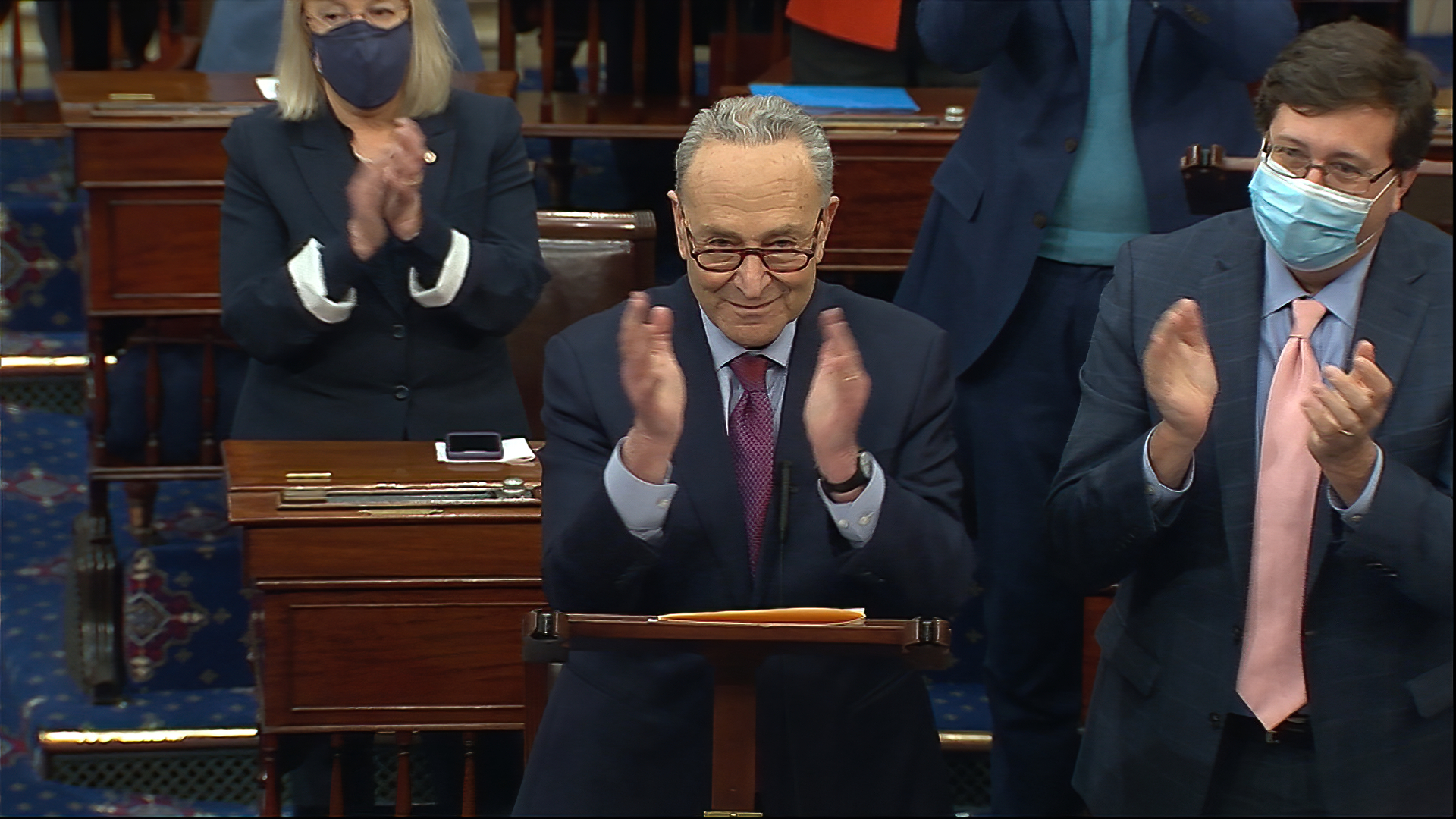 And Senator Mitt Romney of Utah proposed cutting billions of dollars from the bill to states that had better-than-expected revenues despite the pandemic, noting that California actually ran a big surplus last year.

But the vast majority of the GOP amendments failed, along with one by Montana Democratic Senator Jon Tester to require Biden to approve the Keystone XL pipeline, which the President blocked in January by executive order.

The first, extraordinarily long amendment vote - on a measure to raise the minimum wage to $15 a hour, introduced by Vermont Senator Bernie Sanders - was an early test of Democratic party unity. Eight senators in the Democratic conference - Manchin, Tester, Hassan, Kyrsten Sinema of Arizona, Angus King of Maine, Jeanne Shaheen of New Hampshire and Chris Coons and Tom Carper of Delaware - opposed the minimum wage amendment, along with every Republican senator.

Democrats then rejected a Republican motion to adjourn late Friday, banking that Republicans will grow weary and won't offer as many amendments.

Manchin also voted for the GOP proposal, but the Democrats' alternative plan, which was adopted early Saturday morning, will superseded the Portman amendment.

The Senate's effort to pass the $1.9 trillion legislation kicked into high gear on Thursday when Democratic senators and Vice President Kamala Harris voted to open debate.

Republicans then forced the 628-page bill to be read aloud.

Schumer, a New York Democrat, criticised Republican tactics to slow down the process and on Friday thanked the Senate floor staff for the nearly 11 hours of reading the bill, calling them "the unsung heroes of this place".

The Democratic-controlled House passed the legislation at the end of last month, along with an increase in the minimum wage to $15 a hour.

But the Senate parliamentarian ruled that the wage hike could not be included in the Senate's version of the bill under reconciliation.

That change and others, including the alterations to jobless benefits, will force the House to vote again on the legislation, which is expected to happen next week.

Melbourne registered sex offender caught, one still on the run

Venezuela orders arrest of three in US for role in failed...