‘Vampire’ parasite challenges the definition of a plant

Langsdorffia are stripped down to their essentials. Lacking green leaves for photosynthesis, they steal energy and nutrients from other plants. 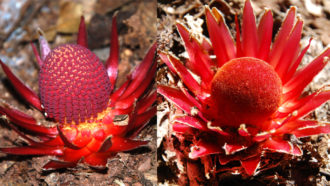 Doorknobs in skirts. Microphones in tutus. There are lots of ways to describe Langsdorffia flowers. To parasitic-plant specialist Chris Thorogood, “They’re vampire plants.” He adds that they “absolutely look to me like deep-sea creatures.”

Thorogood works in England at the University of Oxford Botanic Garden & Arboretum. He’s an author of a May 2020 paper about these mysterious and poorly known plants. It was published in Plants People Planet.

Whatever you compare them to, Langsdorffia flowers are intricate, screaming red showpieces. That’s the total opposite of the unshowy rest of the plant. It has no leaves. It just has grayish, ropelike tissue that burrows through soil. That tissue ranks in looks somewhere between blah and dried-up dog droppings.

Mixing flashy sexual parts and super-simple other parts makes sense for the plant kingdom’s extreme parasites. These include the four known species of Langsdorffia. Why grow a lot of greenery to feed yourself when you can steal what you need?

Like a vampire, Langsdorffia’s underground rope sucks all its nutrition from the roots of other plants. These include figs and mimosas. The burrowing freeloaders “challenge our notion of what plants even do,” he says.

Spotting such marvels requires finding just the right wild spot. Neither Oxford nor any other botanic garden grows them. And even Thorogood has never seen a live one, he lamented in the new profile. But his lucky coauthor, Jean Carlos Santos, has. Carlos is an ecologist who studies insect-plant interactions at Universidade Federal de Sergipe. It’s in São Cristóvão, Brazil.

The flowers of L. hypogea species pop out of the ground here and there in Central and South America, including on Brazil’s savanna, known as the cerrado. “Imagine the visual impact,” says Santos. The flowers bloom during the dry season. That’s when they erupt in loud reds from a thin carpet of other plants’ dead, brown leaves.

Many flowers, from apples to zinnias, sport both male and female parts. But an individual L. hypogea plant is either all male or all female. Each of its knobby blooms bursts from the soil as a skirted mass of tiny same-sex nubbins. To attract vital pollinators, males ooze nectar among the nubbins. Females release it from their skirt and in a sweet zone at the base of the main bouquet. It’s a banquet in a parched season. Ants, beetles, cockroaches and even birds such as white-naped jays gather to feast.

Beetles probably do some actual pollination for the plant, says Santos. But ants and most of the other guests are probably just animal freeloaders on this freeloading plant.

Blooming is an extraordinary event. And it shows that even for a thief stripped to essentials, elaborate floral sex is apparently worth the effort. And it may not be common. Some observers have suggested it may happen but once in each Langsdorffia’s life.

#BlackBirdersWeek seeks to open the outdoors for everyone

Close-up of the sun reveals ‘campfires’