This is a recipe for Vermouth Jus which I’m sharing as the sauce for Crispy Slow Roasted Pork Belly, also published today. A jus is an intensely-flavoured, meat stock reduction sauce favoured by fine dining French restaurants to serve alongside meats and fish. Jus is more savoury and complex in flavour than say a typical... Get the Recipe The post Vermouth Jus (Sauce for pork belly) appeared first on RecipeTin Eats. 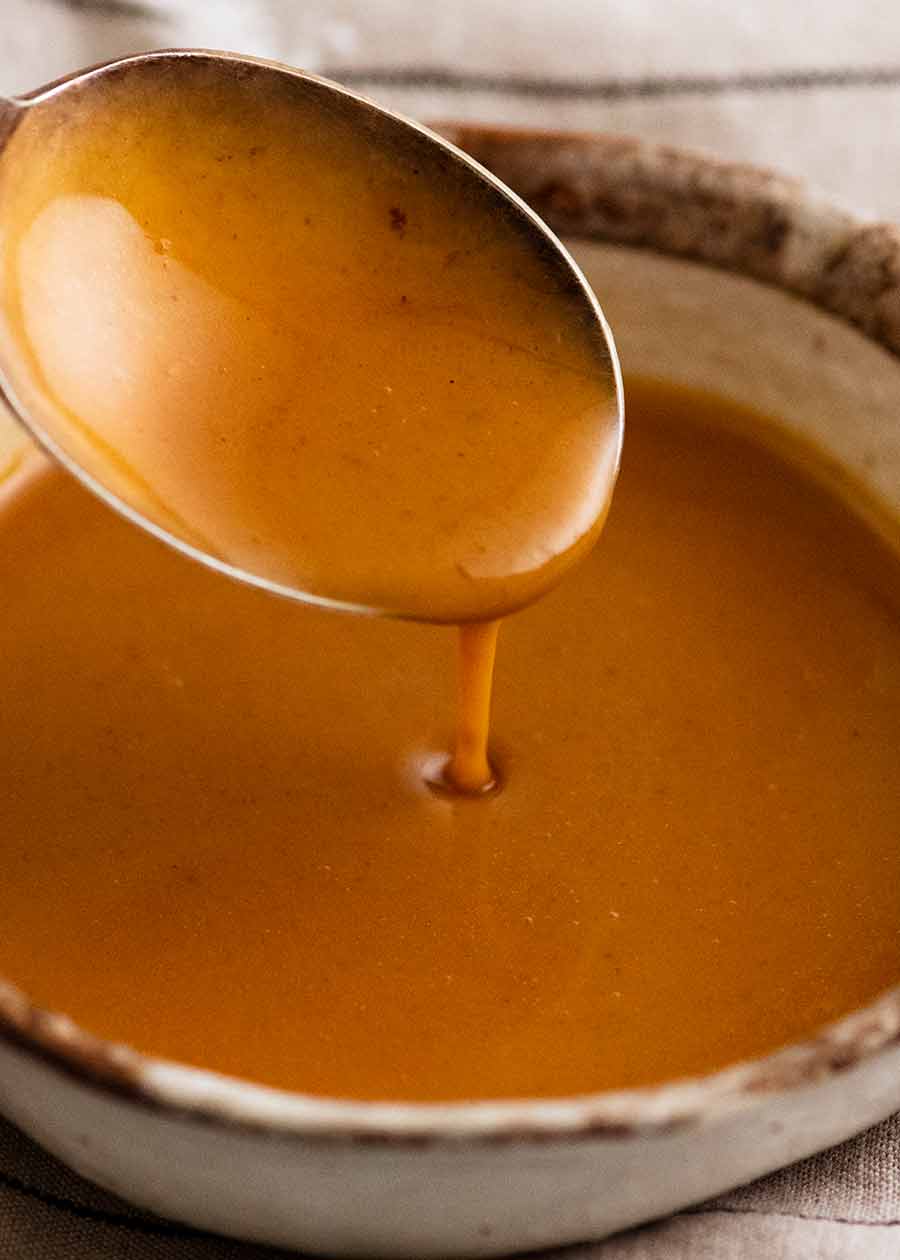 This is a recipe for Vermouth Jus which I’m sharing as the sauce for Crispy Slow Roasted Pork Belly, also published today. A jus is an intensely-flavoured, meat stock reduction sauce favoured by fine dining French restaurants to serve alongside meats and fish.

Jus is more savoury and complex in flavour than say a typical gravy. If you have homemade beef stock on hand, this is a deceptively easy sauce that nevertheless will elevate any dish to fine dining levels!

What exactly is jus?

If the word “jus” conjures images of Masterchef and fine dining restaurants, you’re right on the money! Jus is a French culinary term for what you can think of as the posh cousin of gravy. It’s an intensely savoury, glossy sauce made from homemade stock or meat drippings, heavily reduced to concentrate the flavour.

Whereas a gravy is normally made from meat drippings diluted with added stock or water before being thickened with flour, a jus is never diluted (quite the opposite). A jus typically gets its thickness from the natural gelatine in meat and sometimes from whisking in finishing butter (called “mounting”).

Because it has such a strong flavour, jus is used sparingly – typically a small amount drizzled artfully around the plate!

In classical French cooking, a jus is usually made from veal or chicken stock. Veal is often favoured because it’s rich in gelatine, which is desirable. As veal bones are hard to come by these days, beef stock makes a great substitute and is what we are using today.

In its purest form, it needs very little or no extra flavours added. However it can be a great blank canvas for adding other flavours. In this case, we’re using vermouth. Closely associated with the martini cocktail, this aromatic fortified wine is flavoured gently with botanicals that subtly but beautifully flavour this sauce. The flavour is not distinctly identifiable (and you can certainly cannot detect any alcohol in it), but it adds incredible extra complexity to the sauce that makes it extra wow!

What you need for Vermouth Jus (sauce for pork belly)

If you’ve got homemade beef stock stashed away in the freezer, this is an excellent and quick sauce to serve alongside meats that will elevate any dish!

Note: This jus is naturally thickened from the gelatine in the homemade beef stock, once the sauce becomes concentrated. So there’s no cornflour/cornstarch or flour used, unlike in gravy and other sauces. It should have a consistency like pictured below and in the video: a thin syrup, and not as thick as traditional gravies.

How to make Vermouth Jus

Any jus is straightforward to make and most of the time involved is simply leaving the liquid to simmer on the stove to reduce until it thickens and concentrates into a sauce. We’re going to reduce about 2 1/2 cups of liquid (625ml) down to just 100ml / 3.5 oz!

How to serve Vermouth Jus

Jus is normally served with proteins, ie. meats and seafood. You may think a beef stock-based jus must be served with beef, but in reality it does not taste distinctly of beef at all but rather is simply “meaty”. We use beef largely for its gelatine-rich bones, not its flavour (though it does have a deeper flavour than say, chicken jus).

As such there are no hard and fast rules about what protein you can serve it with, and so I serve it confidently with Slow-Cooked Crispy Pork Belly here.

Use it sparingly when serving as it is a strong flavoured sauce. Allow around for 1 1/2 tbsp per plate. Much more than this and it can overwhelm the flavour of the protein.

On the plate of pork belly slices pictured below, I spooned it partially over the pork. The natural thickness of the jus makes it cling to the pork beautifully and pool elegantly around it.

As mentioned, a beef jus can be used with any protein not just beef. You can use a jus anywhere that you would use gravy or a pan sauce, to bring a deliciously upmarket and special touch!

Here are a few more suggestions for ways to use it:

Love to know what you think if you do try this! And if you too try your hand at putting together a fancy-pants plate of food, send me a photo – I wanna see! – Nagi x

Recipe video above. This is a recipe for Vermouth Jus which I'm sharing as the sauce for Crispy Slow Roasted Pork Belly, also published today. A jus is an intensely-flavoured, meat stock reduction sauce favoured by fine dining French restaurants to serve alongside meats and fish. If you have homemade beef stock on hand, this is a deceptively easy sauce that nevertheless will elevate any dish to fine dining levels!It must be made with either homemade beef stock. Store-bought stock or broth won't work, it just won't thicken, the flavour will be lacking and it will be too salty.Makes: 100ml / 3.5 oz. Doesn't sound like much, but you only need 1 – 1.5 tbsp per serving because it is so intense flavoured. Restaurants typically just drizzle or dot a small around a plate for this very reason.
Course Sauce
Cuisine French, Western
Keyword jus, vermouth jus
Prep Time 5 minutes
Cook Time 20 minutes
Servings 4 – 5
Calories 109cal
Author Nagi

1. Eschalot – Also known as French onions, and are called “shallots” in the US. They look like baby onions, but have purple-skinned flesh. Not to be confused with what some people in Australia call “shallots”. 2. Vermouth – A fortified wine infused with botanicals, commonly associated with martinis! You must use a dry vermouth. Sweet vermouth will make the sauce far too sweet. I use Cinzano brand, which costs $17 from Dan Murphys. Vermouth adds subtle botanical flavours into the sauce and the extra complexity you can only get from cooking with wines. 3. Homemade beef stock – Unfortunately this recipe won’t work with mass-produced, store-bought stock. It lacks the richness that gelatine extracted from the bones and connective tissues, needed to naturally thicken the jus when reduced. Flavour quality is also paramount when used in such concentrations as a jus. Store-bought stock also has salt in it, so the jus becomes way too salty when heavily reduced. 4. Salt – If you only have table salt, just use the smallest pinch. Table salt grains are much finer than cooking/kosher salt so 1/8 tsp of table salt = more than 1/8 tsp cooking/kosher salt. 5. Storage – This will keep in the fridge for 4 to 5 days, or freeze for months. Do not waste a drop of this liquid gold!

You can sit there and look as cute as you want. You aren’t getting a drop of this Liquid Gold!!!