The upcoming James Bond film “No Time to Die” has unfortunately been delayed, due to the Coronavirus Pandemic. Which is a really bummer for all … The article VIDEO: Watch the BMW-Powered Aston Martin DB5 James Bond Stunt Car appeared first on BMW BLOG

The upcoming James Bond film “No Time to Die” has unfortunately been delayed, due to the Coronavirus Pandemic. Which is a really bummer for all Bond fans. But it’s also a bummer for car enthusiasts, as the cars and car chase sequences in most Bond films are epic. In No Time to Die, the featured car in the action sequences is a classic Aston Martin DB5, which is replete with the same sort of classic Bond kit we’re all used to; machine guns, ejector seats, the works.

However, the car that was actually used to shoot those scenes obviously wasn’t a million-dollar classic DB5. Instead, it was a bespoke stunt car and it was/is powered by a BMW engine. In this new video from Carfection, we get to watch both host Henry Catchpole and James Bond Stunt driver Mark Higgins chuck the BMW-powered Aston Martin DB5 around a track and it’s glorious.

For stunt car-duty, the James Bond stunt team built three bespoke DB5 replicas on custom ladder frame chassis, with roll cages, Öhlins dampers and a BMW inline-six. Now, the Bond stunt team will not disclose which brand actually makes the engine. What they have said is that it’s a modern, naturally-aspirated inline-six from a relatively modern car. What brand is famous for making naturally-aspirated inline-six engines?

Listen to the engine in this video, which you can’t not hear because it’s deafening and even drowns out Catchpole’s mic, and you’ll instantly recognize the distinct, metallic howl of a BMW M I6. More specifically, it’s likely the 3.2 liter I6 from an E46 BMW M3, as the Bond team has said it makes a bit more than 300 hp.

Personally, I’m a massive fan of Aston Martin and find the brand to be one of the very most intoxicating brands of all. The real DB5 is also a genuine automotive legend, the sort of car I’d give up a testicle to own. However, on a race track with all day to play, it’d be that glorious stunt car that I’d want to drive more. Pierce Brosnan fought tooth and nail to get a free Aston Martin after shooting one of his Bond films. If I were Daniel Craig, I’d be asking for one of the stunt cars…

Video: Blast from the past – the 360 km/h BMW M5 Hurricane RR Touring

Video: Blast from the past – the 360 km/h BMW M5 Hurricane RR Touring

Today we’re taking a walk down memory lane as I stumbled upon a video that caused some older memories to pop up. Remember when BMW … The article Video: Blast from the past – the 360 km/h BMW M5 Hurricane RR Touring appeared first on BMW BLOG 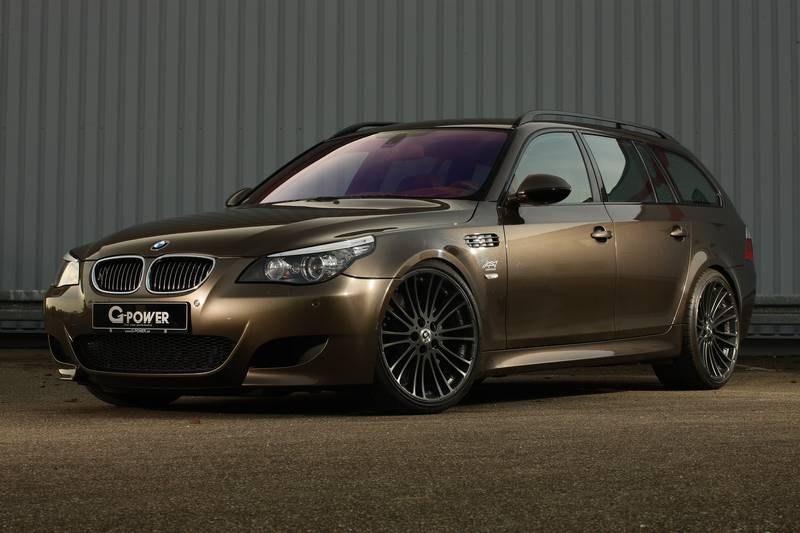 Today we’re taking a walk down memory lane as I stumbled upon a video that caused some older memories to pop up. Remember when BMW used to make M5 wagons? Remember the E61 M5? That was probably the first wagon supercar, one of the very few that can wear that title without being accused of false advertising. It certainly was one of the most impressive creations to come out of Munich and when it got in the hands of the crazy people from G-Power, it turned into a monster.

If you recall, the G-Power people somehow managed to squeeze not one but two superchargers inside that already stuffed engine bay. As you can imagine, a twin-supercharged 5-liter V10 engine can deliver a lot of performance and that’s what happened here. This was probably the most outrageous project the E61 M5 platform had ever seen.

Mind you, the G-Power people also had a single-supercharger kit, but the Hurricane RR is a completely different beast.

The end result showed a power output of 820 HP and 790 Nm (582 lb-ft) of torque. With those figures, back in the day, nobody could get in front of you on the Autobahn. Since the car is still rear-wheel drive, the acceleration figures to 100 km/h (62 mph) weren’t back breaking because putting the power down was tricky. Still, at 4.4 seconds you can’t really call it slow.

What’s more impressive though is how much further this car could go. As you can see from the footage below, it was capable of reaching 360 km/h (224 mph), numbers that are not easy to reach by today’s supercars. And all of that was done in a wagon!

That is one impressive car and everything looked like it meant business. The interior was also overhauled, the steering wheel, the dash, everything. Even the instrument cluster was changed because the original speedometer stopped at 300 km/h while the G-Power one goes up to 400. It wasn’t cheap either. It cost €330,000 when new, a supercar-worthy price tag.

The article Video: Blast from the past – the 360 km/h BMW M5 Hurricane RR Touring appeared first on BMW BLOG

Trade Your Collector-Quality Car for the Ultimate Florida...