It wasn’t easy, but the Wallabies have secured a fifth win in a row for the first time since the 2015 World Cup with a 32-23 triumph over Japan in Oita. Who shone against the Brave Blossoms, and who faces a nervous wait as the tour heads to the UK? It’s time for you to […]

It wasn’t easy, but the Wallabies have secured a fifth win in a row for the first time since the 2015 World Cup with a 32-23 triumph over Japan in Oita.

Who shone against the Brave Blossoms, and who faces a nervous wait as the tour heads to the UK? It’s time for you to make the calls.

Here’s how it works: you rate the Wallabies team from one to ten in the form below. You don’t have to give every player a score – if you didn’t catch enough of someone’s performance or don’t think they were on the field long enough for you to make a judgment, just leave them blank and it won’t affect their score. For instance, if you feel Reece Hodge’s 12 minutes before injury weren’t sufficient to give him a fair rating, you are free to do so.

If you need a rough guide as to what each score means:

1. Had he not played, the team would have been better off. Negatively affected the performance of the side. May God John Eales have mercy on his soul.
2. Anonymous. Was he even there?
3. Did some things that you expect a player to be able to do, but did a whole bunch of other things that sucked.
4. Was passable in patches, but not up to standard in a match of such importance.
5. Performed his role without anything really noticeable happening.
6. Good.
7. Pretty good, actually.
8. Very good.
9. Excellent.
10. Extraordinary. Calling them man of the match would be an insult.

Was Connal McInerney’s game-sealing try enough for a high score on debut? Does Quade Cooper get marked down for ‘that’ intercept try? Did anyone deserve a perfect 10 in what Dave Rennie called a “rusty, frustrating” game?

Simply head onto the form below when you’re ready to rate and get cracking!

‘His stock is rising’: Christie, Tupaea outstanding as All Blacks crack century...

Get your questions in for Issue 31 of Coach’s Corner

Get your questions in for Issue 31 of Coach’s Corner

Winning ugly was the name of the game for the Wallabies to kick off the Spring Tour, squeaking past a gritty Japan 32-23 to extend their winning streak to five. With plenty of improvement to be made before the squad heads to the UK, it’s the perfect time to dissect it all in this week’s […] 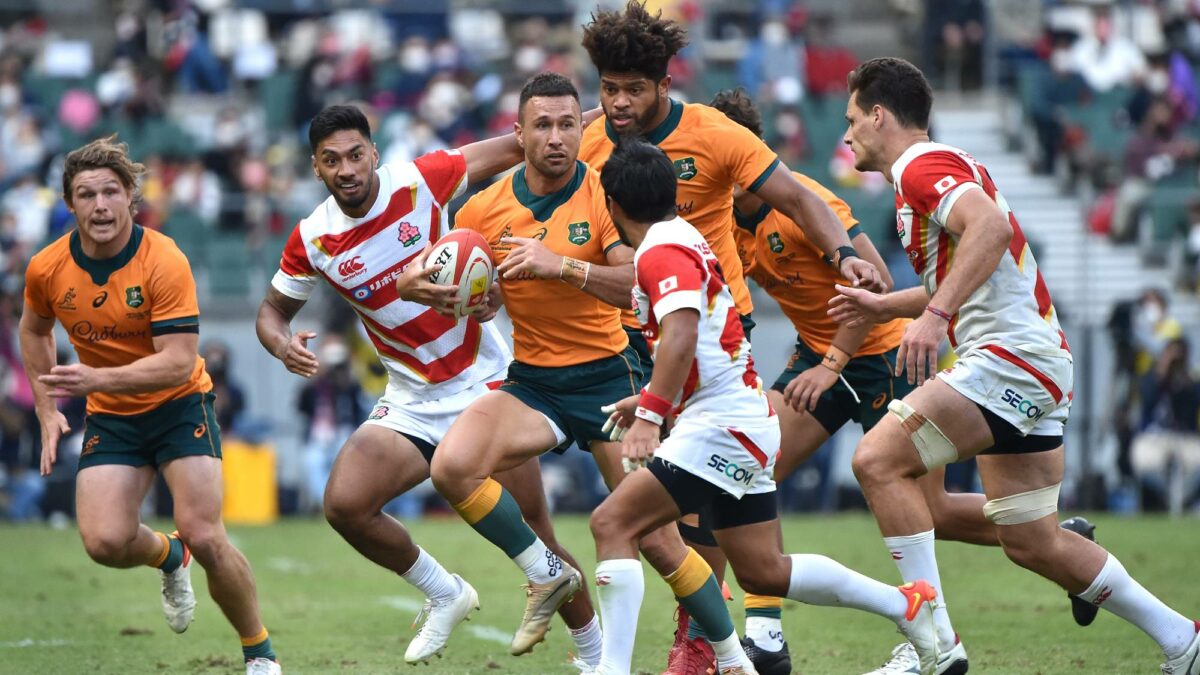 Winning ugly was the name of the game for the Wallabies to kick off the Spring Tour, squeaking past a gritty Japan 32-23 to extend their winning streak to five.

With plenty of improvement to be made before the squad heads to the UK, it’s the perfect time to dissect it all in this week’s edition of Coach’s Corner.

In case you’re new here: every Friday, Nick Bishop, The Roar’s resident rugby expert, comes on deck to answer all your questions from the weird and wacky world of rugby.

Just a few months ago, any win was cause for celebration for Wallabies fans: but now, having seen them at their best in four straight Rugby Championship wins over the Springboks and Argentina, performances like Saturday’s don’t quite cut the mustard for supporters… or, for that matter, coach Dave Rennie.

Where will the Wallabies need to get better ahead of a true litmus test against Scotland, Ireland and England in the near future?

Meanwhile, the withdrawal of Marika Koroibete from the squad for family reasons saw Tom Wright get his chance as starting winger, while Hunter Paisami stepped in for the injured Samu Kerevi and Jordan Petaia had nearly a full match after the early loss of Reece Hodge.

Did the trio do enough to secure spots in the starting XV over in Europe… or should the looming return of some locally-based internationals take priority?

Elsewhere, the All Blacks ran riot in a 104-14 demolition job of the USA, but even more encouraging for the New Zealanders than the result was the performance of new kid on the block Finlay Christie at 9. The scrum-half spot might now be the most hotly contested in the All Blacks line-up: did Christie do enough to stamp his claim on it moving forward?

Got any other questions following the Wallabies’ first match against Japan – or anything else from the world of rugby? Nick – and us – can’t wait to hear them. So get asking in the comments below and, of course, check back in on The Roar on Friday to see the answers.

The Wrap: Richie Mo’unga takes it to another level at Eden...

How concerned should Australian rugby be about the Waratahs...

Wallabies must master the art of winning

Botham’s grandson to line up for Wales

James O’Connor to lean on English stint in sodden Sydney

Road to The Rugby Championship 2021