WandaVision Theory: Doctor Strange Breaks Wanda Out Of Her Fantasy

As seemingly perfect as Wanda's fantasy is, it certainly can't stay that way, and it might just take the Sorcerer Supreme to break her free. 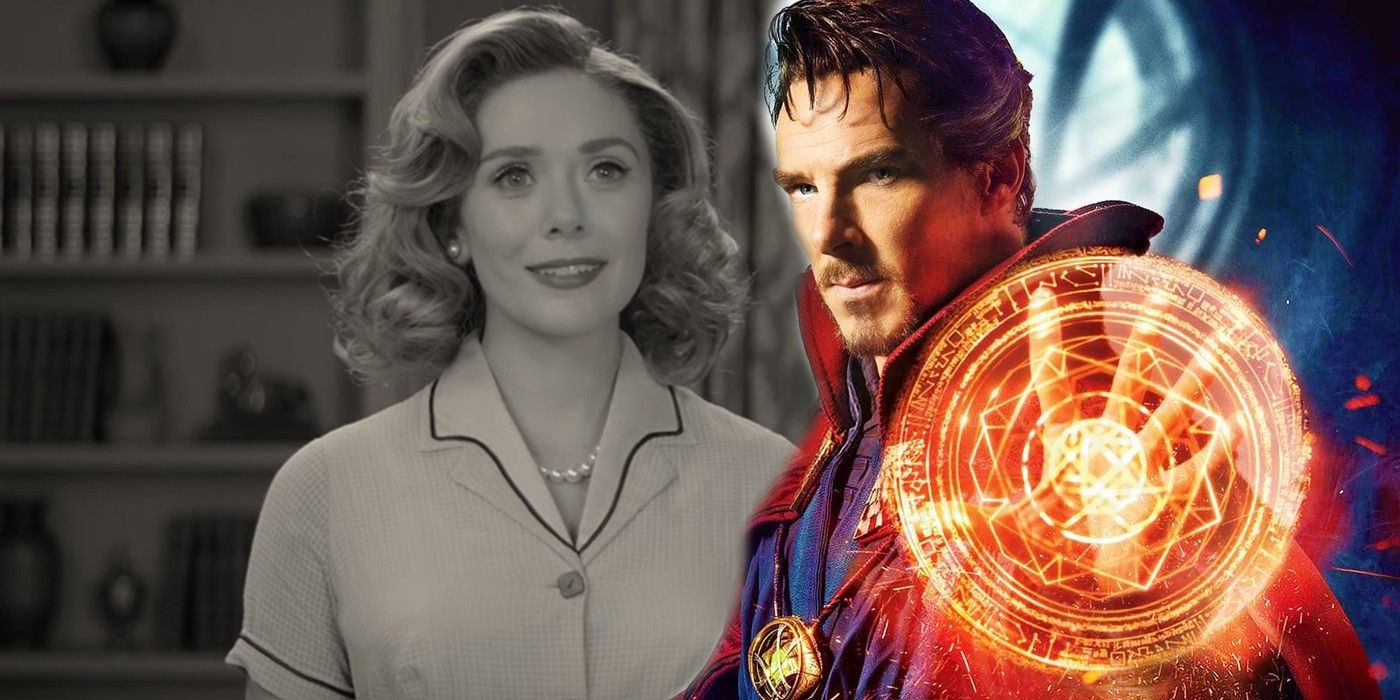 The first two episodes of WandaVision paint a rose-tinted picture of Scarlet Witch's domestic fantasy, but when it comes time to break out, it might be none other than Doctor Strange himself giving her a hand. The premiere episodes of the first Disney+ Marvel Cinematic Universe show released on January 15th to critical acclaim, scoring the show the highest Rotten Tomatoes rating of the entire MCU. The unsettling, 60s-era sitcom tone of the show has garnered much discussion about what's going on, although the most generally accepted theory is that Scarlet Witch has somehow created a pocket reality inhabited by her and The Vision.

The reality-bending precedent set by WandaVision seems poised to continue throughout the entirety of Phase 4, as most of the films have a mysterious slant keeping fans on edge. Thor: Love and Thunder is set to introduce Jane Foster's incarnation of Thor, while various rumors abound regarding Spider-Man: Homecoming 3 and its potential multiverse shenanigans. However, no movie in Phase 4 is surrounded by as much mystique and intrigue as Doctor Strange and the Multiverse of Madness, which Wanda is already confirmed to play a major role in.

As of right now, no one aside from the filmmakers at Marvel Studios knows exactly how the repercussions of Wanda's reality warping will play out. However, that hasn't stopped fans from analyzing and theorizing, and one of the most popular theories suggests that it might take the Sorcerer Supreme himself to help Wanda overcome her trauma and break free from her own fantasy.

Shortly after the first two episodes premiered on Disney+, Marvel released a behind-the-scenes video discussing the production process and subtly teasing the events of the show's overarching storyline. In that video, eagle-eyed fans drew attention to a very specific silhouette spotted behind the barrier separating Wanda's world from the real one. That silhouette has a stark resemblance to Stephen Strange, even down to the general shape of the Cloak of Levitation. Obviously, Strange showing up in WandaVision would have major repercussions, some of which could very well set the stage for Wanda's mysterious appearance in the Doctor Strange sequel.

Wanda Maximoff is one of the most powerful mutants and magic users in the entire Marvel Universe, and because of this, there's a precedent for her powers growing far beyond her own control. In the 2004 storyline Avengers: Disassembled, Wanda is mind-controlled by Doctor Doom, taking advantage of the chaotic nature of her magic due to the loss of Scarlet Witch's unborn children. The combination of Doom and Scarlet Witch takes out nearly the entire roster of Avengers, inadvertently killing members such as Hawkeye and The Vision as well as destroying the Avengers mansion itself.

At the end of the day, the only person reliable enough to incapacitate Wanda is Doctor Strange, due to his knowledge of how her chaos magic operates. After a brutal battle between the Avengers and several constructs created by Wanda, Strange uses the Eye of Agamotto to induce a coma in Wanda, leaving her to be taken into protective custody by Magneto and Charles Xavier. This sets up the status quo at the beginning of House of M, another famous storyline involving Wanda losing control of her reality-warping abilities (and one that the MCU might be subtly building towards).

The MCU's roster of heroes has continued to grow since the original Avengers teamed up back in 2012, and it's evident which characters rank highest in terms of power. Kevin Feige himself has said that Captain Marvel is the most powerful character in the universe at this point, and with displays such as her battle with Thanos in Avengers: Endgame, it's easy to see why he would make that claim. However, Stephen Strange doesn't come too far behind, as his particular brand of magic mastery allowed Doctor Strange to hold his own against Thanos and also arguably save the universe by setting the events of Endgame in motion.

Because of Strange's training with the Ancient One (as well as his thousands of years honing his magic while simultaneously trapping Dormammu himself in a time loop), Doctor Strange is one of the most powerful Avengers we've been introduced to up until now, and he's a perfect candidate to help bring Wanda out of her magic-induced fantasy. The two characters have had a long and storied history in the comics, with Stephen even mentoring Wanda at points, so it would make perfect sense for the two characters to interact for the first time in this way.

As fans have seen time and time again, the MCU loves taking iconic comic book storylines and remixing them in an exciting or unique way. From Extremis, to Civil War, and most recently with Avengers: Infinity War, Marvel Studios has cornered the market on giving fans exactly what they want in ways they didn't know they did. WandaVision could be the set-up for them to do something similar with Avengers: Disassembled and House of M. A reoccurring theme within the movies so far has been the abuse and misunderstanding of power by those with it, and nobody is a better candidate to explore that theme with than Scarlet Witch at this point. She's experienced so much trauma at this point in her career as a hero that it seems as if the events of the show are a subconscious projection of her tribulations coupled with her chaotic powerset.

If this is the case, then Doctor Strange is the perfect character to provide a foil for Wanda, as his solo film was all about his desperate attempts to attain more power than he was ready for at the moment. As someone who was instrumental in saving the universe, Stephen Strange understands the dark underside that comes with too much power in the hands of someone dealing with their own demons. Hopefully he does have a presence in WandaVision, not to wrest control of Wanda's fantasy through brute force, but through compassion, understanding, and heroic empathy.