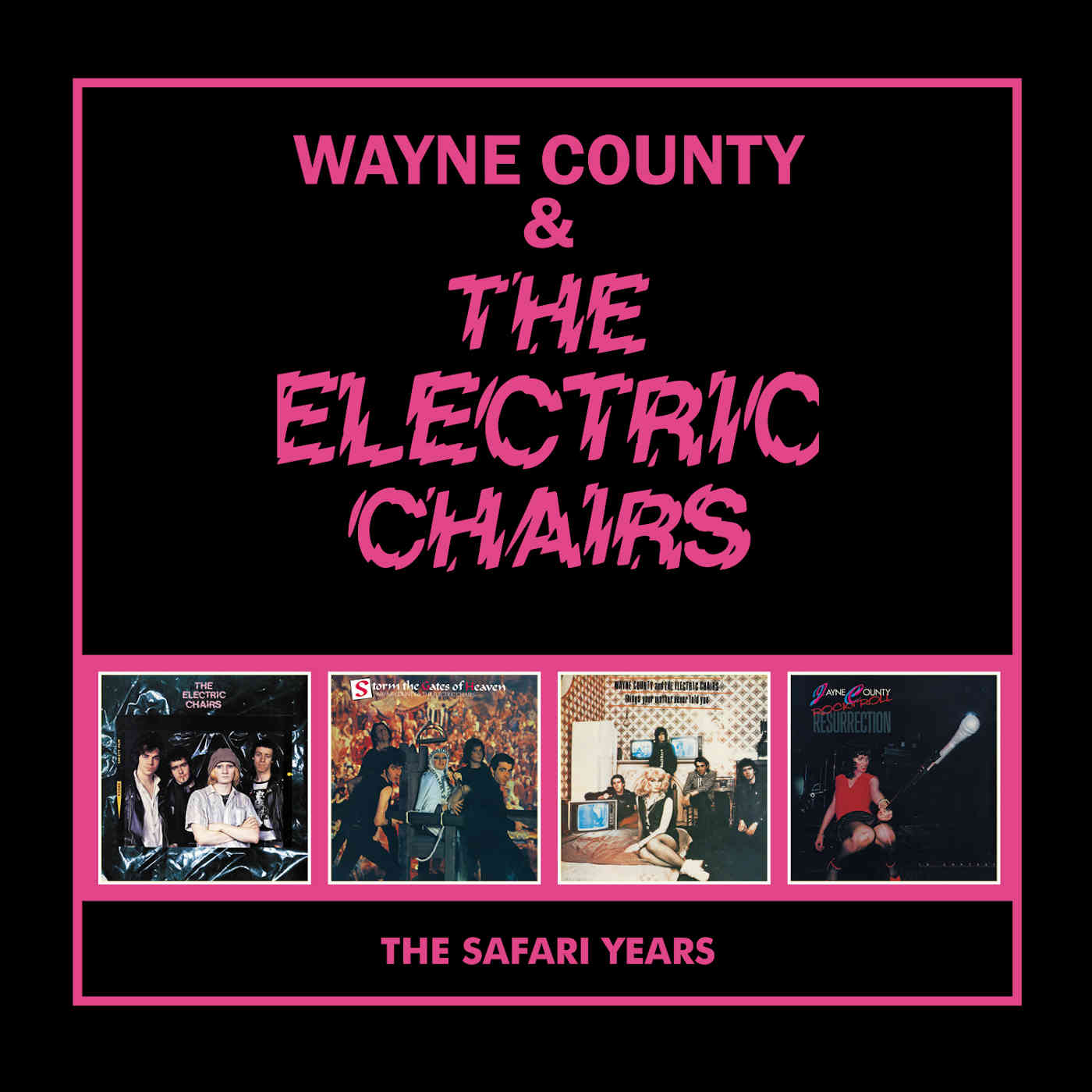 This 57 track 4 CD capacity wallet set covers just about everything released by seminal American Punk icon Wayne County and his Electric Chairs between 1977-79.  A band who have never been given the credit they deserved, says Ged Babey, as an inspirational rock’n’roll group, lead by a unique, fearless individual.

Pronouns: Jayne County, as she is now, has identified as a woman since 1980 -but all these albums were originally released over 40 years ago when she ‘shaved her legs but she was a he’ so for the purposes of reviewing this product I will stick with Wayne and ‘they’ will refer to the band.

Whilst it’s impossible to ignore the singer (rock’s first openly transgender singer…) I really wanna talk about the band as a whole and the music. The Electric Chairs were never really taken seriously by many and their work has never been reassessed and given the credit it deserves.  They were a fantastic rock’n’roll band – every bit as good as contemporaries Johnny Thunders & the Heartbreakers and the Patti Smith Group.  They wrote some really great songs, but are best known for the attention-grabbing (I You Don’t Wanna Fuck Me Baby, Baby) Fuck Off.

As a body of work, these three studio LP’s and live set, really is a superb collection of exciting, affecting and extraordinary music. Ranging in style from 50’s type rock’n’roll to garage psych and bitchy glam punk boogie – right thru to post-punk experimentation.  The songs are full of humour and character but the music is tough and steely. Despite the lyrics being provocative and lewd ,the music is classic rock’n’roll which strangely doesn’t sound dated and has a vibrancy and freshness. – It’s great to have it remastered with all the extras (b-sides, Peel session, monitor mixes…).

They were a versatile band who adapted to suit the material they were presented with by County. There was a stockpile of material from 1973/74 and his previous band, the Backstreet Boys as well as new, topical material (Eddie & Sheena) and the odd cover of a psych classic (Too Much To Dream Last Night) as well as the semi-autobiographical songs about County’s life.

The band were perhaps overshadowed by the singers gender identity and provocative onstage persona. County revelled in the shock-tactics of being an openly gay, cross-dressing rock-singer using his libido as a weapon of pop-cultural warfare. He really was an extraordinary figure who deserves the status as a fearless, unapologetic ground-breaker.

A cissy-boy from Georgia, a drag queen who was at Stonewall, a Warhol acolyte and actor in ‘Pork’, and a DJ at CBGB’s who was signed to MainMan (Bowies management company) – the material he recorded for them (now available as Wayne at The Trucks) was for some reason never released. ‘Fucked By the Devil’ for one, would’ve been a sure-fire day-time radio hit surely…!

Foul-mouthed and brash, what he lacked in vocal ability Wayne made up for in sheer attitude and ferocious performance. The songs though were actually very astutely put together. Camp’n’vulgar trash on the surface but a turbulent life turned into unapologetic art and self-expression.

Fuck Off with its you were hot shit or so I heard / you aint nothing but a cold turd is sheer gutter poetry with a bitchy sting in the tale. And Jools Holland on boogie-woogie piano.

Eddie & Sheena is far more than a ‘novelty’ – the Buddy Holly Heartbeat ‘Ted’ section is spot-on musically and the ‘punk’ segment is a perfect Pistols parody which has never been bettered. A topical Romeo & Juliet about Youth Cult Wars it ended with a birth and not a death, To regard it as nothing but an absolute classic 1977 45 is a mistake.

The first, eponymous album, The Electric Chairs was a fun, dirty rock’n’roll album – punk rock only due to the timing of its release – the term proto-punk being retrospectively applied. Basically, it was blatantly offensive rock’n’roll which took ideas and elements magpie-like from every one of Waynes contemporaries. From the New York Dolls (Bad In Bed) to the Stooges (Out of Control),  Blondie (Worry Wart).  Add to that elements of Alice Cooper, and the Rocky Horror Show – a Beach Boys pastiche in 28 Model T, it was an album packed with variety and great tunes and a lust for, well, just lust.

Storm the Gates of Heaven opens with the Hammer Horror show meets Alabama Song title track – which is as inflammatorily blasphemous and anti-religion as anything by Crass or the Dead Kennedys, but still darkly comic.

Cry of Angels, seemingly continues the religious theme and the guitar solo is worthy of the Only Ones. It’s a fantastic lyric about individuality and freedom. The bands had two guitarists at this point, Elliot Michaels and Henry Padovani, the former being the lead player as far as I’m aware.

Man Enough To Be A Woman is practically a sister-song to Thunders So Alone musically and arguably the definitive Wayne County song.  Whilst it is a serious account of, and uses the phrase ‘gender identity’, it seems to undermine itself rhyming ‘there is a man in my room, he’s riding a broom’ with ‘the jerk made me hurt, he looked like a baboon’. Being a transsexual in the 1970’s though, I guess, meant you had to be tough and have a sense of to humour to match.

Tomorrow is Another Day is the real surprise on the album, a gentle lullaby of a song with a hint of Garbo and the only hint of tenderness and fragility instead of the usual bravado and lewdness.

Trying To Get On The Radio deserved to be a hit, a flawless ironic piece of New Wave pop.

1979’s Things Your Mother Never Told You is Wayne County & the Electric Chairs absolute masterpiece.  Despite opening with a classic song from the 1974 period, it sounded modern in ’79 thanks to producer David Cunningham (later of Flying Lizards).

Wall City Girl starts like a Bad Seeds song from years later and has a great double-tracked talk-over section. And ends with a electronic glam march to great effect. The song seems to be the story of a trans sex worker in Berlin who is murdered, but contains a beautiful line: Angels are genderless, messengers of the heavenly kiss.

Boy With the Stolen Face has the same rhythmic feel of a well-known XTC hit and its hard to tell who ‘stole’ it from who. A dub-style interlude is a surprise too.

Un-Con-Troll-able is one of may examples of what a fantastic, hugely under-rated drummer JJ Johnson was. Val Haller comes into his own as a mighty bass player on the album too.

I have always thought the album was ‘under-rated’ until I read the AllMusic Review by Dave Thompson where he calls the ‘audacious album… among the most important albums of its age.’   He continues, and I can’t put this any better myself… Electro-punk starts here. Producer David Cunningham takes only a portion of the credit;  County’s songs match his ambitions all the way, from the harsh, grating soundscapes behind “C3″‘s muttered imprecations to the soft-spoken paranoia of “Waiting for the Marines,” and onto “Berlin,” the song that put into words everything David Bowie (among others) tried to convey about that city via image and insinuation.

The final disc is a rare “In Concert” album, recorded on New Year’s Eve 1979, and it captures the band on good form.  Of the ten songs three date back to 1973, Fucked By The Devil, Stuck On You and a cover of the Barbarians Are You A Boy? and most of the rest from the debut album. Its  a crowd-pleasing set and a shame in retrospect that they didn’t include anything from Things Your Mother… but, hey, it was New Years Eve!

Take note IDLES followers, Wayne County sang about ‘the mask of masculinity’ 40 years ago, before your boys were born! ‘Man Enough To Be A Woman‘ too could be an IDLES title.

Angels are genderless .... is somehow the one phrase from the whole boxed set which sticks with me because, it somehow says, that in life we have a assigned gender perhaps but in death – we are all the same… so why worry about it whilst we have our short time on this earthly plane….

The Electric Chairs don’t often get a mention in the historical accounts of Rock’n’roll in the late seventies.  They seem to be all-but forgotten, treated as a novelty.  This boxed set proves this just should not be the case at all.  They should be mentioned in the same breath as Patti Smith and Johnny Thunders bands and despite a slimmer back catalogue, bands like the Cramps or Devo.

You could even make the case for Blondie, perhaps being influenced by Wayne County and turning his ferocious camp/trash aesthetic into a commercial version. (X-Offender, Rip Her To Shreds could easily be Wayne songs).

I hope Jayne Rodgers, as she is now, looks back on these albums with immense pride as they were beautiful, trashy, rock’n’roll art and great fun, washed in the blood of rock and roll.

To me, this is the remastered, repackaged, remarkable, reissue of the year. The Band That Punk Forgot. The fantastic, unique, Wayne County & the Electric Chairs.

( It’s £75 to see the original line-up of the Damned play next year and £150 for the original Buzzcocks singles re-issued on vinyl in a box. But for less than £20 you can get a hold of the complete Electric Chairs on CD. No contest.)

New Single by Jayne County & Am Taylor – DL from Amazon Watch and listen below!

All words by Ged Babey

Reports: Arts To Be Given £1.5 Billion COVID-19 Lifeline