Whales’ blowholes aren’t as protective as scientists had thought. They not only can let in water but also pollutants. 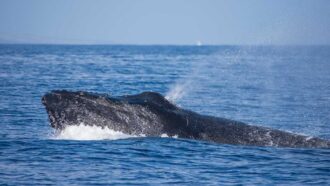 All whales have one or two blowholes on top of their heads. This organ started out as a nostril-like feature at the tips of the snouts of whales that lived millions of years ago. Over time, those nostrils slowly moved backwards to the top of a whale’s head. This allowed the animals to breathe by skimming the surface of the water. Scientists had thought this change in position, plus a few other adaptations, evolved to keep seawater from entering the whales’ respiratory tracts. But no more.

Explainer: What is a whale?

One team has just shown for the first time that seawater enters whale blowholes.

This challenges what scientists thought they knew about blowhole anatomy and whales’ respiratory systems. It also increases concerns about what risks pollution, such as oil spills, may pose to whales.

Maria Clara Iruzun Martins is a marine mammal scientist. She joined this project as a visiting student at the Woods Hole Oceanographic Institution in Massachusetts. As part of her work, she watched videos taken by drone aircraft flying above pods of surfacing whales. Some were North Atlantic right whales, others were humpbacks.

“You can’t take [the whales] out of the water,” Martins explains. “They come up, they come down. And that’s all we see from them.” And that’s what makes drones so useful, she adds. They allow people to watch whales without approaching them.

She worked with biologist Michael Moore at Woods Hole. He had collected the videos for another study. While watching them, he noticed how seawater covered open blowholes. Puzzled, he shared the videos with Martins.

In the beginning, Martins thought, “This can’t be right.” If true, it would mark the first evidence of seawater entering blowholes. And that means water was likely entering the whales’ upper respiratory tract. But after finishing the video, she no longer had any doubt.

She and her team shared their new findings May 29 in Marine Mammal Science.

Humpbacks that routinely inhale seawater might also take in toxic pollutants, such as oil, Martins now worries. During an oil spill, a slick of toxic oily hydrocarbons floats atop the water. As some of it starts to evaporate, these pollutants can linger as toxic vapor right above the water.

Inhaling toxic vapors after a spill can poison marine mammals. But those vapors ultimately drift away. That leaves behind thicker, less volatile parts of the oil. And they, too, can be quite toxic and float for quite a while. Nearby whales may inhale a double whammy: not just the oily vapors but also this floating oil.

Scientists know oil can poison the whales. They aren’t yet sure how far this oil might move into their respiratory tracts. But Martins says there is a reason to be concerned since they now know whales can inhale oil with any seawater.

Findings from this study also could inform future whale research. Scientists regularly use drones or long poles equipped with petri dishes to collect blow samples. This allows them to study a whale’s health. But if these animals inhale seawater, then they also could spout it out, which might ruin samples.

“This is particularly concerning for my research,” says Justine Hudson. She’s a marine mammal scientist. While she was a graduate student, she had tried to study cortisol in beluga whales in Manitoba, Canada. Cortisol is a hormone that rises in animals that are stressed. Levels in her samples tended to be low. “I can’t tell if that’s because the animal I collected it from had a low stress level,” she now says, “or if it’s because the sample was just diluted with a lot of extra seawater.”

Explainer: What is a hormone?

Measuring how much seawater is in a whale’s exhaled blow can help scientists standardize their data. That could make analyses of their blow more reliable.

Blow sampling is a relatively new tool. The finding by Martins’ team is a step toward improving that tool, says Vanessa Pirotta. She’s a marine scientist at Macquarie University in Sydney, Australia. She’s also one of the first to collect blow samples by drone.

Martins hopes to build on her team’s new research by examining how and why seawater entry occurs and how it varies across whale species.

Explainer: What are logarithms and exponents?

Will The Most Important Observatory In Astronomy’s History...