What did you say? Fabric masks can really muffle voices

Some types of face masks muffle speech more than others — something that teachers should take into account. 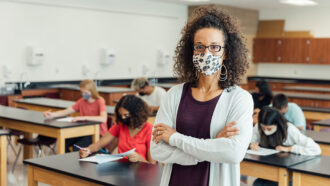 Face masks help reduce the spread of COVID-19 and other infectious diseases. But they also tend to muffle speech. When you’re chatting with a friend, that may not be a big deal. But if you’re struggling to understand what your teacher is saying, that can interfere with learning. And some sorts of masks muffle speech more than others, tests now show.

Explainer: What is Acoustics?

It’s a timely topic, notes Pasquale Bottalico. He’s a sound scientist, or acoustician (Ah-kooh-STIH-shin), at the University of Illinois Urbana-Champaign. Masks can make things harder for both speakers and listeners, he notes. A tight-fitting mask can force a speaker to exert more effort when talking. Plus, masks cut airflow and can filter some sound frequencies more than others. That, in turn, can make it tougher to tell similar-sounding words apart.

Bottalico and his team tested masks in rooms set up to look like classrooms. In the front of the room they set up a piece of equipment that looks like a human head and torso. It stood in for a teacher. Through a speaker in the head, the researchers played a variety of simple words commonly used in speech studies. In some of the tests, this “teacher” wore no mask. In others, it wore a homemade mask made of three layers of fabric. In yet others, it wore either the type of mask worn by surgeons or a more protective N95 mask.

Volunteers sat at one of six locations in the room and listened to 50 words. Each word was one syllable and had starting and ending consonants that sandwiched a vowel sound. That’s important, says Bottalico, because consonants typically have a higher frequency, or pitch, than vowel sounds. Such words can often help doctors identify hearing problems in patients, he notes. Examples include the words nurse, fern, late and fake. Masks tend to muffle consonants. As a result, some words may sound less distinct when spoken through a mask.

To make the test more realistic, Bottalico and his team added low levels of background noise. This simulated other students talking in the room. The researchers added a bit of echo, too, which also is common in a classroom.

Even when the speaker was not masked, some listeners misunderstood words. But masks made the problem worse.

“The goal of teaching is to communicate,” says Bottalico. “So the take-home message is that fabric masks aren’t the best option in a teaching environment.” He and his team reported their findings December 9 at a meeting of the Acoustical Society of America.

Although the team’s results showed clear differences, they are not the final word, says David Woolworth. He’s an acoustical consultant in Oxford, Miss. (One job of acoustical consultants is to help architects design music halls so that they have no dead spots or unusual echoes.)

For instance, Woolworth notes, the tests only considered three types of masks. Plus, masks made with different fabrics might muffle speech less (or more) than the one the team tested. “Some fabrics breathe better than others,” he adds. Different fabrics block virus particles differently, too. But, Woolworth says, some types of more-breathable fabrics still retain their virus-filtering capability.

“The main take-away is not that there’s an ideal mask,” he notes. It’s that masks can affect how well speech will be understood. “Through some you can sound as clear as a bell,” he says. “Through others, you can sound like you’re underwater.”

To overcome muffling by masks, teachers might be able consider using a microphone and speaker system to amplify their words. However, Bottalico notes, that still wouldn’t change the fact that masks stifle consonants more than vowels. A better solution, he says, might be to more clearly enunciate (Ee-NUN-see-ayt), or pronounce, their words. Part of that would be speaking more slowly and focusing on making consonant sounds more distinct.

Yes, The James Webb Space Telescope Really Should Launch In 2021

We Have No Idea What Makes A Planet ‘Potentially Habitable’

Ask Ethan: How Does The CMB Reveal The Hubble Constant?

Legos could last a disturbingly long time in the ocean

How to find the next pandemic virus before it finds us

How to fight online hate before it leads to violence