What Happens When Lightning Hits An Aircraft?

Aircraft are not immune to weather phenomena like lightning. Over the last year, plenty of news has come… 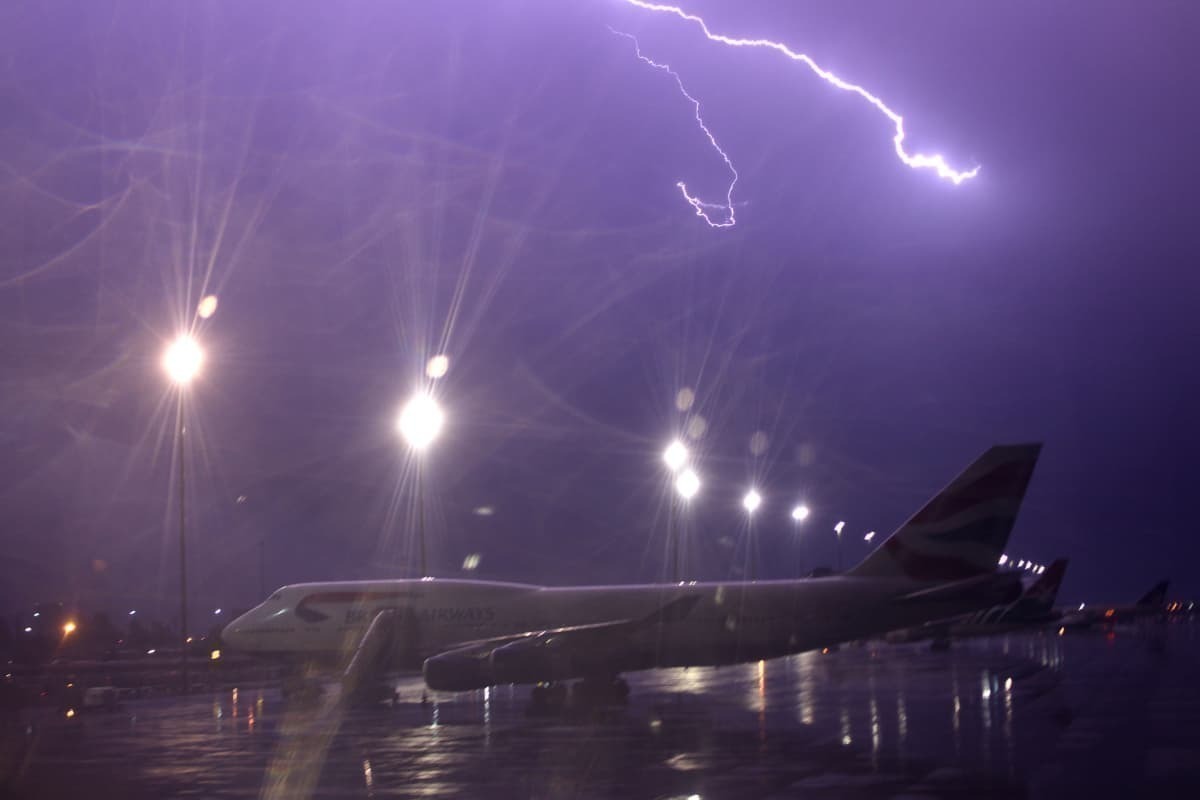 Aircraft are not immune to weather phenomena like lightning. Over the last year, plenty of news has come out about aircraft that have experienced lightning strikes. Thankfully, none of those events led to major aviation incidents. However, it raises the question about what happens when an aircraft is struck by lightning. Simple Flying investigates.

Boeing released a detailed explanation about what lightning strikes do to aircraft. According to the manufacturer, lightning is initiated at a leading edge of the plane, which ionizes and creates a strike opportunity. From another point on the plane, the lightning current exits to the ground.

There may be some interesting phenomena, according to Boeing. This could be a little glow on the nose or wingtips. The ionization of the surrounding air is what causes this.

How are aircraft protected from lightning strikes?

Older airplanes with a metal structure are mostly made up of parts that are thick enough to be resistant to lightning strikes. Thanks to the thickness, the internal components of the aircraft are protected. This is what helps prevent electromagnetic energy from entering the electrical wiring at a dangerous level that could prove consequential.

However, with more and more composite parts being used on planes, there are additional measures that must be taken. During the aircraft design process, manufacturers test these materials to see if they have appropriate lightning protection. Regulatory agencies also review these measures.

However, on the ground, it could prove damaging for some ground workers as happened in 2017 at an airport in Florida:

What is the response to a lightning strike?

Aircraft safety is of the utmost importance. After being struck by lightning, the pilots may not have any indication of the strike. All systems may continue to operate normally. However, if alerted of a lightning strike, it is up to the crew to determine if there has been any damage that needs to be rectified.

If pilots do not catch a lightning strike in the air, it can be visible to technicians on the ground after landing. If it is determined that a lightning strike occurred, one of the primary concerns will be any damage to internal components and systems. Technicians will need to do a proper examination of the aircraft’s system to check for any sort of anomalies. Any damage will have to be repaired, although it may put a plane out of service for a while, as happened to an Emirates A380 in Munich.

For passengers, while it may be a little shocking, accidence as a result of a lightning strike are incredibly rare. While it may delay your departure for a bit, the motto “better safe than sorry” rings true in aviation.

The last significant aviation incident attributed to a lightning strike was in 1967. Pan Am 214 was a Boeing 707 flying from San Juan in Puerto Rico to Philadelphia with a stop in Baltimore. After taking off from Baltimore heading to Philadelphia, the aircraft suffered a lightning strike that ignited vapors in the fuel tank leading to an inflight explosion. Since then, aircraft manufacturers have made planes safer.

Have you ever been on a plane that experiences a lightning strike? Let us know in the comments!

When Did Airlines Start Introducing A Business Class?

How To Watch Every DCEU Movie Online | Screen Rant

With Wonder Woman 1984 and The Suicide Squad on the way, the DCEU will continue...

James Gunn has explained how his upcoming DC film The Suicide Squad got its title...

The team at BMW Group Classic decided to start a mini-series of videos showcasing...

How to use Luminar to speed up your photography workflow

Jaguar Land Rover plans to gradually resume production from 18th May, starting with...

More surveillance, not less, will be the new normal in...

Man stabbed in the torso, arms and legs in Sydney's west

A man has been arrested after the stabbing.

Netcare Sunninghill Hospital in KwaZulu-Natal will reopen after reporting a COVID-19...

One of the groups that recently gained an influx of attention is “Terrible Art in...