What if Trump’s record on the pandemic is better than we think?

Trump defenders, here’s your chance: Tell us why this response to COVID-19 merits a second term. 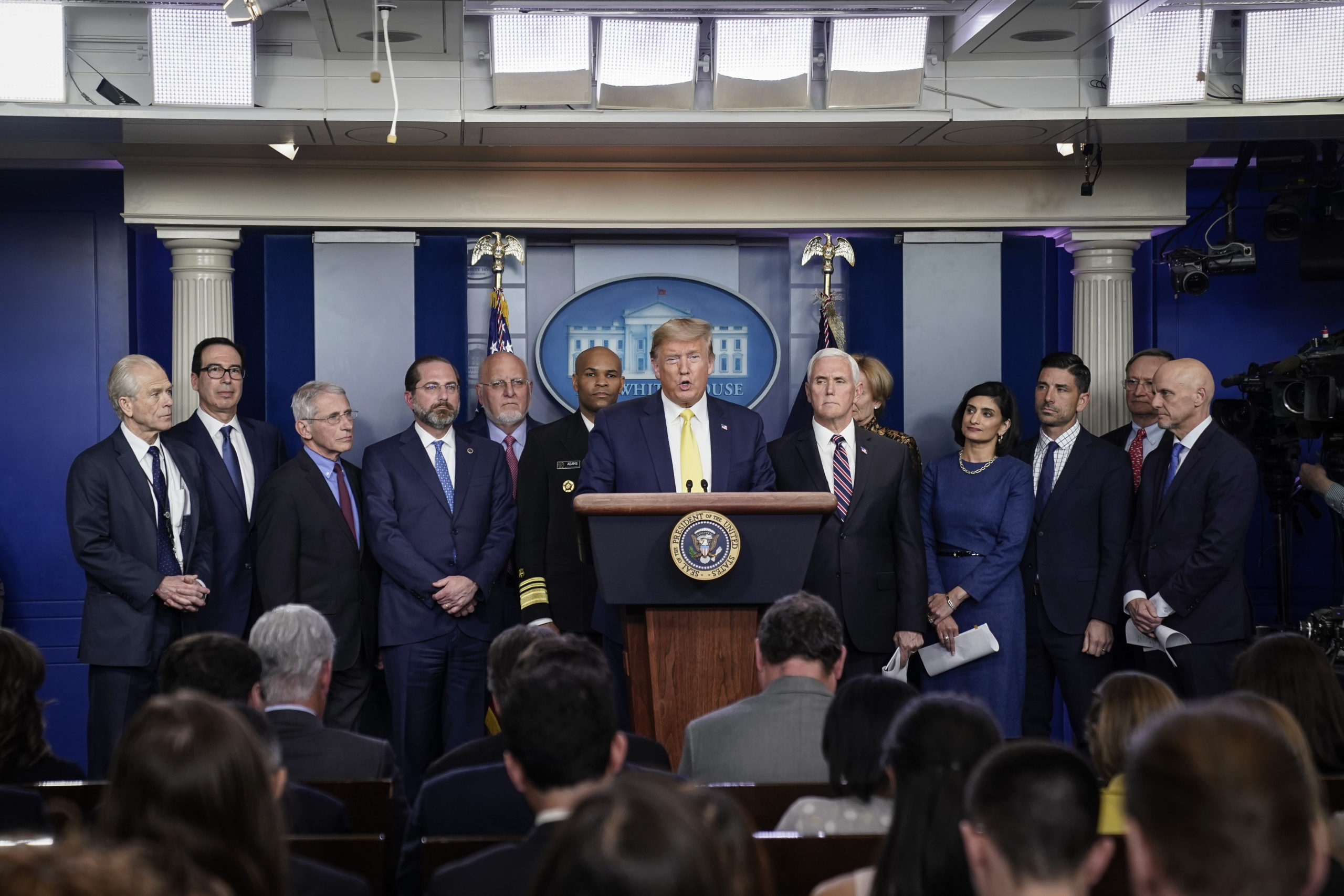 Altitude is a column by POLITICO founding editor John Harris, offering weekly perspective on politics in a moment of radical disruption.

Recently the philanthropist and public health advocate Melinda Gates sat down with POLITICO and was asked to assign a grade to U.S. President Donald Trump on his handling so far of the coronavirus crisis. Gates’ answer: “D minus.”

Say this much for Trump: He is not a grade-grubber. Nor is he a teacher’s pet. Gates surely did not like Trump or his policies long before the pandemic. For the sake of argument, let’s very generously assume she was too harsh by two full grades. That still leaves him with a B minus.

That is not a grade that would cause an employer to move Trump’s application to the top of the pile (“Let’s get this kid in for an interview”). If he already worked for you, Trump would be a ripe target for furlough (“You know, we never would wish for a crisis but it does force us to have some difficult conversations we had been putting off.”)

Trump does work for all of us, of course, and his response to the cataclysmic events of 2020 presumably will be the preoccupying question — what else comes close? — as voters this fall decide whether he continues to do so. At the moment that U.S. deaths have passed the 100,000 threshold, more than any other country, it’s fair to ask: By what rational standard could Trump pass this test?

In the spirit of that question, a newsroom colleague gave me a challenge: Take the other side, and make the case that Trump’s pandemic performance has been satisfactory.

If I were playing in my own contest, I wouldn’t make the case that his record is good, but I could make an argument it’s not as bad as commonly portrayed.

My colleague doesn’t genuinely believe that Trump has done an affirmatively good job in his handling of the coronavirus. But this person does believe that the Melinda Gates view is so widely held by journalists and the sorts of people we talk to most frequently that we risk group-think — becoming hardened in perceptions and impervious to either improvements in his performance or reasonable counter-interpretations of his pandemic record.

If we “turn the sound off” — that is, ignore Trump’s nonsense about the possible therapeutic benefits of Lysol and bogus predictions (as in late February’s vow that infections within a couple days would be “close to zero”) — might the substantive record be more defensible than is widely supposed?

Well, assignment declined. The contrarian case my colleague wants to read should be made by someone with more confidence in his or her words than I can muster, even as a parlor-game debate.

But I will invite others to make that case as best they can. Do you think Trump on balance is doing a good job managing the twin imperatives of public health and restoring the economy during the pandemic? Or at least a better job than he is generally being credited for in most news coverage and mainstream commentary? Then send an email making your argument to explain@politico.com. We’ll review the best of them in a future column.

Let’s agree to a couple of rules for this exercise. People can benefit from understanding different ways of interpreting a shared universe, but there’s not much value in arguing about alternate universes. In other words, any credible defense of Trump, it seems to me, must reckon with the plain factual record that Trump’s administration did not “have it totally under control” as he said on January 22, when the world was groggily realizing that something serious was going on with a new disease in China. As late as March 6, when most informed people had indeed awoken to the alarming nature of the threat, Trump visited the Centers for Disease Control and Prevention to proclaim, “Just so you understand, now it’s all performing perfectly.”

A serious defense of Trump must also contend squarely (as opposed to simply rejecting outright as biased) with detailed journalistic reconstructions of his pandemic response. These include a New York Times piece highlighting how the administration’s drift in February meant that the country was far behind in creating tests that could have been used to sharply limit spread of disease. There is a Washington Post autopsy highlighting how this failure was caused in part by managerial chaos and warring factions within the executive branch. A deeply reported POLITICO story partly qualifies Trump’s culpability by noting that his administration’s flat-footedness reflected chronic bureaucratic infirmities that predate his administration.

So, if you are willing to engage with inconvenient evidence and still find things to praise in Trump’s record, by all means have at it. Or do the same if you reject the whole premise of this column. (And please let me know in your email to explain@politico.com if you are willing to share your name, city of residence, and occupation.)

We did precisely the same exercise several months ago, when I challenged people to explain how it was consistent to believe both that Trump’s impeachment over the Ukraine matter was a gross miscarriage of justice while Bill Clinton’s impeachment during the 1990s was perfectly fair. The answers, by and large, were serious, well-written, and illuminating, including one reader’s acknowledgement that he defends Trump the way some people defended O.J. Simpson — concerned less with the specific facts of alleged wrongdoing than with a sincere conviction that the system is rigged.

This invitation I’m extending, as it happens, lands right in the neighborhood of one of the principal debates about modern journalism. One argument says the problem with journalism is timidity and equivocation: We allow nostrums about impartiality and attention to all sides to obscure reality rather than clarify it. This lets matters of verifiable truth or falsehood to get lost in a haze of phony controversy. The other argument says the problem with journalism is smugness and insularity: We are oblivious to people who don’t share our worldview, or dismiss them as nuts, and that’s why four years ago we were so surprised and confused by the Trump phenomenon.

In the context of Trump’s coronavirus record, there is scant evidence that the first argument is a big problem. But there’s still considerable risk of the second — that Trump could blindside expectations in 2020 just as he did in 2016.

That’s why the game my colleague suggested — make the best possible case for Trump — has a serious dimension. If I were playing in my own contest, I wouldn’t make the case that his record is good, but I could make an argument it’s not as bad as commonly portrayed. That case would have three primary pillars.

Everyone has been surprised, not just Trump. I don’t know many people who supposed on March 11 (the night of the president’s error-filled Oval Office address on coronavirus) that by Memorial Day much of the country would still be working from home, or not working at all, and that campuses, baseball stadiums and much else would be closed. On the positive side, only in the New York area, and only for a brief window, was there anything like the collapse of the health system in Italy, the fear of which is what prompted the shutdown.

Given that no one wanted to shut down, and that the resistance to the necessity of doing so typically is strongest among people who are sympathetic to Trump, it is reasonable to wonder whether a President Hillary Clinton or President Barack Obama could have led the country to the same degree of shutdown and social distancing that Trump has accomplished. The same could be said of Trump’s agreement to trillions of dollars in economic relief that Republicans otherwise would have tried to block, as they did with Obama’s funding requests during the 2009 financial rescue.

*The United States is a lumbering giant

A sprawling and diverse country with a complex federal system of government is often caught flatfooted, before summoning strength. Before Pearl Harbor, the U.S. Army was smaller than the Portugal’s. In the case of the pandemic, many of the acute shortages that marked early coverage have been mitigated. Testing on a per capita basis has surged, including in comparison to many hard-hit countries, though it is still far short of what health experts say is needed. The same is true of early shortfalls in protective equipment and ventilators.

*Trump and critics have to play by the same rules

Often in politics the tendency to say “Yeah, but what about BLANK” is a distraction or obvious dodge. In the pandemic, in some cases, it is fair. Yes, it is true that Columbia University disease modelers estimated that if the country had begun widespread social distancing measures one week earlier in March, at least 36,000 lives could have been saved.

But Trump was far from alone, even as late as early March, in balking at the necessity for such extreme measures. New York Governor Andrew Cuomo has been praised for his urgency and empathy by many of the same people condemning Trump. But the New York Times and others have illustrated how he and New York Mayor Bill de Blasio also resisted earlier shutdowns (moving several days after California) and sounded Trump-like notes in boasting that New York’s superior health system — “Excuse our arrogance as New Yorkers,” Cuomo said — would avert the kind of disaster seen elsewhere. In fact, New York has nearly three times as many deaths as any other state.

Trump might have gotten a D-minus in absolute terms on Melinda Gates’ test, but in politics the exams are always graded on a curve — i.e., in comparison to others.

As my colleagues on POLITICO’s exemplary health-care team remind me, there’s a yes-but to every point of defense someone might reasonably make about Trump’s pandemic record. The most important remains the absence of a coherent national testing policy — critical to a safe reopening of the economy — even as the total number of tests has increased.

By my lights, however, the main defect in Trump’s pandemic record is not about health or economic policy. It is about politics.

There is no way to “turn the sound off” on the modern presidency. It is above all an educational office — the most powerful platform in American life to set the national agenda, to illuminate complex choices, to help people understand how to reconcile competing values.

It is not possible to judge Trump’s actions as distinct from what comes out of his mouth — from comparing coronavirus one day to the flu and boasting on another about his purported prescience in seeing before others how dangerous it is. Trump rhapsodized about churches swelling with worshipers on Easter and then backed off. In one mood he says that states should set their own policies on shutdowns and then in another he turns to mockery to pressure governors to open up before they believe it is prudent to do so.

This confused and confusing fog of words is the part of the record Trump defenders must contend with. Once again: explain@politico.com.

Michel Barnier: UK needs to get real if it wants a Brexit...

For global diplomats, Zoom is not like being in the room