Beat All Sports (BAS) – the cricket bat and other equipment manufacturer company – has played a massive role in the initial phase of former India captain Mahendra Singh Dhoni’s career. The owner of BAS, Somi Kohli, has recently revealed how one of the dealers of the company’s equipment, Paramjeet Singh, had persuaded him for… Beat All Sports (BAS) – the cricket bat and other equipment manufacturer company – has played a massive role in the initial phase of former India captain Mahendra Singh Dhoni’s career.

The owner of BAS, , has recently revealed how one of the dealers of the company’s equipment, Paramjeet Singh, had persuaded him for sponsoring the cricket kit of Dhoni, who was a teenager back then.

Since Dhoni was born in a middle-class family, so buying a cricket kit with limited resources was always a challenge for him. But his ‘Chotu Bhaiya’ aka Paramjeet supported Dhoni especially in his early days in cricket, be it financially or morally.

Not to mention, characters of both Somi and Paramjeet were also seen in Dhoni’s biopic movie, ‘MS Dhoni: The Untold Story’.

While speaking to The Indian Express, Somi said he is grateful that the company became a part of MSD’s success and the bond between them and the cricketer has been for 22 long years now.
Somi added that when he came to know about the retirement of a veteran stumper, he couldn’t believe it.

“As a cricket manufacturing company, we are always on the lookout for new talent and our dealer Paramjeet Singh had been calling me consistently to tell about this young cricketer from Ranchi. After six months of him trying to convince me, I sent the kits to Mahendra Singh Dhoni in February 1998, and it has been a 22-year-long association with him for us,” said Somi.

“When I got to know about his retirement yesterday, I could not believe it first and could not sleep for hours. He has been a gem of a cricketer, and we are glad that we could also play a part in his journey so far.”

Somi also shared an interesting story about Dhoni before the series against Pakistan in 2005, when the wicket-keeper batsman went to his place and spent a night there.

“In 2004, I first met him in Chandigarh and months later he came to Jalandhar to visit our factory. Dhoni stayed at my home, and when I told my wife Manju Kohli, she asked, “Who is he?” The next day, when I met Dhoni, he told me he could not sleep for hours thinking about my wife’s words,” revealed the BAS owner.

“Some months later, when he scored the century against Pakistan, Dhoni called us at 11 in the night and asked me if he could talk to my wife. He told her, ‘Auntie, main Dhoni.’ My wife told him, ‘Beta, now the whole world knows who Dhoni is.’ That was the bond we shared,” Somi added further.

The South African contingent of the Royal Challengers Bangalore (RCB) squad in the Indian Premier League (IPL) touched down in the United Arab Emirates (UAE) on Saturday. For RCB, Proteas’ giants, AB de Villiers and Dale Steyn, have played a significant part in their campaign in the previous seasons. In the view of the lop-sided… 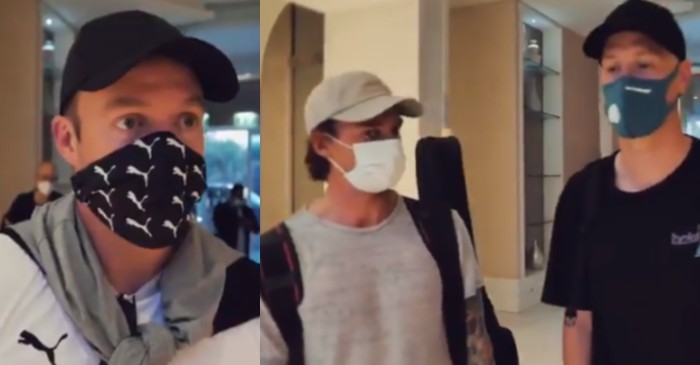 The South African contingent of the Royal Challengers Bangalore (RCB) squad in the Indian Premier League (IPL) touched down in the United Arab Emirates (UAE) on Saturday.

For RCB, Proteas’ giants, and Dale Steyn, have played a significant part in their campaign in the previous seasons.

In the view of the lop-sided balance in the side, in favour of batsmen, RCB decided to bag the services of former Delhi Daredevils (now: Delhi Capitals) all-rounder, Chris Morris.

After a fiercely contested bid with the Mumbai Indians (MI), Morris was sold to RCB at a whopping price of INR 10 crores.

RCB’s social media handle uploaded a short video of the South African arriving in the UAE to take part in the thirteenth edition of the IPL, starting September 19.

“”And here it is RCB fans, the moment you’ve all been waiting for! @ABdeVilliers17, @DaleSteyn62
and @Tipo_Morris have joined the team in Dubai!,” RCB captioned their post.

And here it is RCB fans, the moment you’ve all been waiting for! ????@ABdeVilliers17, @DaleSteyn62 and @Tipo_Morris have joined the team in Dubai! ????#PlayBold #TravelDay #IPL2020 pic.twitter.com/l0n09ZV5Jb

The three talked about the challenges awaiting them in the upcoming tournament, especially the searing heat of the Middle-East. The Proteas trio remained excited to join the RCB squad and hit the ground running in the prelude to the cash-rich league.

The Royal Challengers are all set to take-off!

The Challengers will settle down in Waldorf hotel in Dubai throughout the tournament. A special block of the hotel has been reserved for the team as informed by RCB chairman, Sanjeev Churiwala.

“We wanted a exclusive facility in the centre so the players have short travel time (between Dubai, Abu Dhabi and Sharjah) and there is 100 percent compliance of the bio-bubble.“We have booked the entire block which has 155 rooms with exclusive facilities like team rooms, gym and dining. All the hotel staff will also be tested to ensure more safety,” Churiwala had said.

IPL 2020 Going To Be Comparatively More Secure According...

‘Thank you for the appreciation and good wishes’: MS Dhoni...