When prey get scarce, these jellies become cannibals

Invasive comb jellies may feast on their larvae if massive population booms in summer deplete their prey. 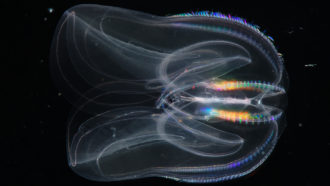 Some jellies go ballistic when their prey disappears. Cannibalistic, that is.

Mnemiopsis leidyi (NEE-me-op-sis LAY-dee-eye) is a species of comb jelly native to the western Atlantic Ocean. Unlike jellyfish, these jellies don’t sting. But they can play a notable role in their ecosystem. This species invaded Eurasian waters in the 1980s. Since then, this jelly has flourished in its new home. In these waters, its population cycles each year. It booms during summer. That’s when prey is abundant. It then goes bust in fall and winter as food gets scarce. Now a study finds that to get through lean times, the adult jellies eat their young.

Jamileh Javidpour is a marine ecologist. She works at the University of Southern Denmark in Odense. She led the new study to learn how a “brainless, fragile animal” conquers new environments. That knowledge could reveal new ways to control the invasive species.

Javidpour and her team collected comb jellies, both adults and larvae, from Kiel Fjord. This inlet of the Baltic Sea lies east of Germany. The team studied the animals one August and September. This spanned the population’s boom and bust. The adults’ preferred prey is a type of small crustacean. They’re called copepods (KO-puh-podz), and by the end of August their numbers in the fjord had plummeted. At the same time, larval comb jellies also began to disappear. By the end of the collapse, adults were about the only comb jellies left.

Back in the lab, the researchers studied some of the survivors. There, they chemically labeled larvae with a rare type, or isotope, of nitrogen. Then they placed the young jellies with starved adults. After 36 hours, those adults had higher levels of the isotope than adults fed a normal diet. That’s a sign that the adults had eaten the larvae. The team described its findings May 7 in Communications Biology.

The larvae can’t survive cold winters, the researchers say. So young hatched in late summer are unlikely to add to the population. Instead, the adults may ramp up reproduction. In late summer, they’ll be able to feast on their young, bulking up before winter.

“We thought that it was self-inflicting harm,” says coauthor Thomas Larsen. He’s a biologist at the Max Planck Institute for the Science of Human History in Jena, Germany. But it may be strategic, he says. It seems these jellies are “building up resources for the winter.”

BREAKING: Ministry clarifies rules on deposits when landlords reduce or waive a...

Looking Back at Our Pale Blue Dot

Here’s what bats ‘see’ when they explore the world with...

The Cosmic Story That Unites Us All

No, The Universe Is Not Purely Mathematical In Nature