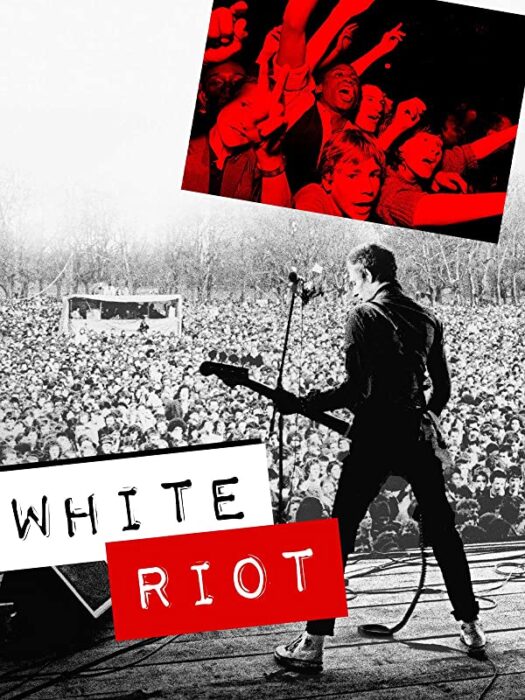 The past is present. White Riot illuminates how the Rock Against Racism movement rose up against violent extremism in recent British history and how that need for resistance persists in the twenty-first century.

Rubikah Shah’s White Riot traces the rise of Rock Against Racism (RAR), a DIY campaign that arose in the late 1970s in response to growing nationalist and discriminatory politics in the UK. While Rock Against Racism is best remembered for performances by artists like The Clash, X-Ray Spex, Elvis Costello, Steel Pulse, and so many others, it was also a movement that brought together journalists, graphic designers, filmmakers, photographers, and activists.

The film centres in part around Red Saunders, a photographer and Agitprop theatre purveyor who co-founded Rock Against Racism with Roger Huddle in 1976, but it’s also a large-scale community affair. In White Riot, Shah reveals how RAR functioned as a rallying cry for anyone willing to take a stand on ethical ground. The National Front was gaining a foothold in the UK, and musicians like Eric Clapton and Rod Stewart voiced approval of those racist ideologies. Yet those weren’t going to be the last words from the music scene. Punk rockers and their supporters had something to say – and loudly.

Blending documentary form with animation and archival imaging, Shah creates an electrifying new record of Rock Against Racism and the people who shaped it. On its surface, White Riot is a compilation film, bringing together archival news footage to tell a story about the rise of the National Front and its particular brand of racism in the UK. Yet it’s also a timeless narrative that speaks to the present. White Riot opens with The Clash’s London Calling playing over the sound system and a television image of Martin Webster spewing inciting language to his eager viewers: Do you want this country to become occupied? This isn’t just language that’s familiar to those who saw it on television the first time around. Rather, it’s readily intelligible for twenty-first-century moviegoers who bear witness to xenophobic lawmaking and violence perpetrated against immigrants seeking rights and freedoms.

The film conveys how the long-term effects of imperialism and colonisation led to the rise of fascist groups like the National Front, and demonstrates how those harmful legacies endure. Rock Against Racism wasn’t only fighting against the overt intolerance of neo-Nazi groups. Rather, Shah reveals the insidiousness of prejudice and the difficulty of uprooting it. Quick edits cut across seemingly innocuous cultural footage from television programmes and films, ultimately shedding light on less obvious incarnations of racist violence. Self-identified progressives and leftists, Shah intimates, perpetrate acts of implicit bias, marginalization, and subordination, too. If we’re going to envisage RAR as a tool for change, we need to understand the broad and varied spectrum of racism to rock against.

As viewers come to glimpse the present in the past, they also gain access to a vast archive of original RAR material and ephemera. There’s a constant visual flow of Temporary Hoarding issues – the RAR zine. Those images flash in large scale across the screen along with the letters, posters, badges, leaflets, and flyers that came to define the anti-racist movement. While there are various special collections repositories in the UK and the US that house some of this ephemera, it’s hard to come by. Anyone interested in perusing these materials will be thrilled with the breadth of digitised documents alone that make their way into White Riot. The film also invites viewers to play a central role in preserving this ephemera and illuminating its value. Digitally animated pens annotate the various zines and photography contact sheets right before our eyes. Frequent point-of-view shots place the viewer in the position of archivist and researcher, preparing these RAR materials for future use.

Although political resistance is centred in White Riot, it’s worth remarking on the incredible wealth of dazzling music footage in this film. Camera shots from the crowd look toward the stage at the April 1978 Rock Against Racism/Anti-Nazi League carnival in Victoria Park, giving the viewer a chance to attend the historic event. At the same time, images shot from backstage, looking out onto the crowd, offer unparalleled access to the sights and sounds of Joe Strummer, Paul Simonon, and Poly Styrene. Shah didn’t shoot this archival footage, but she weaves it together in a way that underscores its pastness while presenting us with a rare chance to be part of it all.

The film tirelessly reminds viewers that punk is political, and music matters. Although much of White Riot is necessarily steeped in a particular historic period, Shah insists that the past is never really past. Fascist politics creep into so-called democratic countries, police murder Black people with impunity, xenophobic violence rises across the Western world, and neo-imperial policies enable the subordination of the Other. The final image of the film, a brief intertitle, blasts out a warning: “The National Front was defeated, but the fight is far from over.” In White Riot, Shah serves up a timely evocation of the past and a wake-up call for the future.

White Riot was recently longlisted for the 2021 BAFTA Film Awards. You can learn more about the documentary at , and you can follow Rubika Shah on .

You can follow Audrey on and , and you can check out her to learn more about her writing and her archive of books, records, and ephemera.

The Horrors Re-Engage With Industrial Noise On 'Lout'

Omega Tribe: Out Of My System – EP review