Alarm over the missing data, which was restored Thursday, became the latest source of tension between the CDC and administration officials. 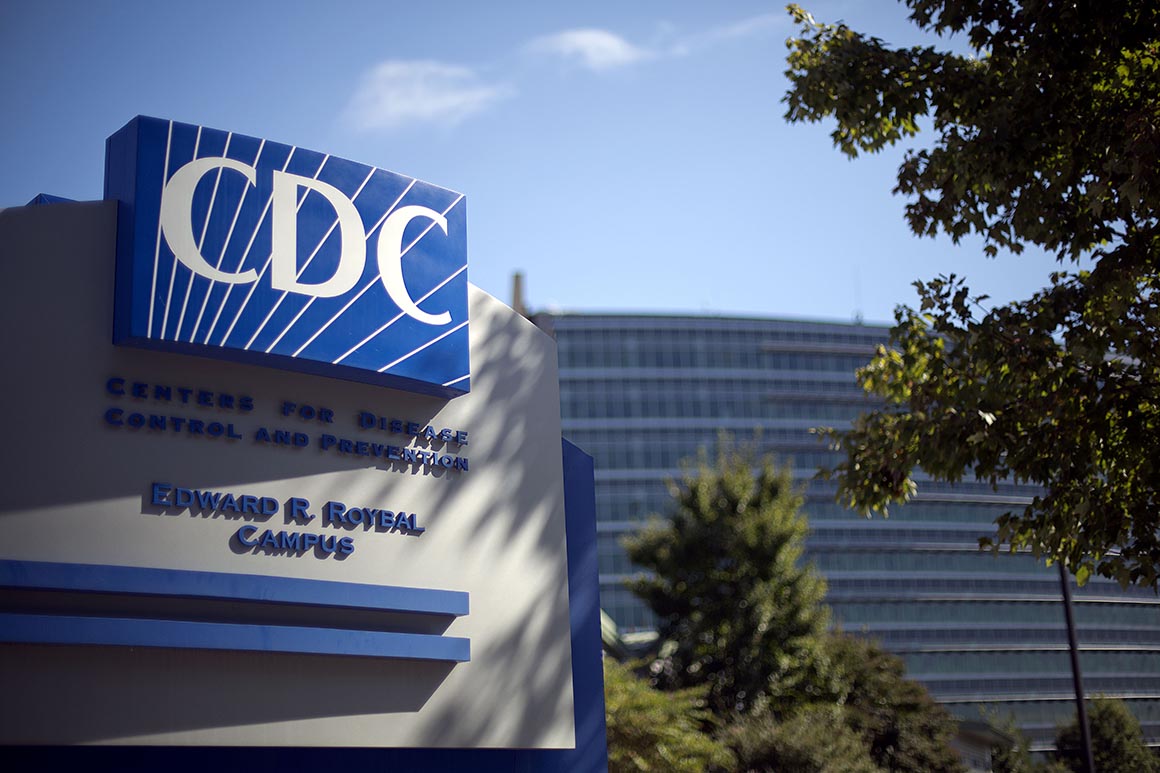 After the Trump administration ordered hospitals to change how they report coronavirus data to the government, effectively bypassing the Centers for Disease Control and Prevention, officials at the CDC made a decision of their own: Take our data and go home.

The sudden disappearance of the CDC’s coronavirus dashboards on Wednesday — which drew considerable scrutiny before the agency restored them on Thursday afternoon — has become the latest flashpoint in the extraordinary breakdown between the Washington, D.C.-based federal health department and the nation’s premier public health agency, located in Atlanta.

While Democrats and health care groups spent Thursday blasting the Trump administration over the missing dashboards, which tracked critical data on coronavirus hospitalizations, officials at the Department of Health and Human Services insisted that they were just as shocked when the CDC’s data disappeared from public view.

“No one came out of our conversations believing that CDC was going to stop doing analysis,” said one administration official who was involved in plans for shifting the data-reporting responsibilities away from CDC. The official, who requested anonymity, said the 24-hour disappearance of the agency’s dashboards was an unwelcome surprise.

“All it did was feed into this narrative that we were cutting off the CDC when that’s not what happened at all,” the official said.

The flap over the missing CDC data is just the latest source of tension between the CDC and federal health officials that’s contributed to a fragmented response to the pandemic. CDC officials have complained they’ve been unusually sidelined during the crisis as President Donald Trump pushes for faster reopenings, while White House officials contend they’re being forced to work around the agency’s weak spots.

The health department took credit for restoring the CDC dashboards Thursday and said it was committed to transparency. “Going forward, HHS and CDC will deliver more powerful insights on the coronavirus, powered by HHS Protect,” said spokesperson Michael Caputo, referencing the new data-reporting system that relies on outside vendors who have received at least $35 million combined. The CDC did not respond to multiple inquiries.

Inside the health department, staff gave conflicting explanations for the agency’s decision to pull its dashboards offline. Three officials characterized it as a flash of frustration with HHS’ order to shift management of coronavirus data away from the CDC. One official said the agency took down the dashboards just to update the system but failed to notify HHS ahead of time.

But they acknowledged that the health department's turf battles, which are now playing out in a very public way, are hampering the government's response to a pandemic that has claimed about 140,000 lives in the U.S. and is still surging in many parts of the country.

Two CDC staffers also left a White House data committee this week after the decision was made to stop using the CDC’s system for coronavirus data collection. Two officials attributed the move to the agency’s frustration with White House decision-making, although an HHS spokesperson disputed that characterization. The spokesperson said the employees were recalled to CDC because they were specialists in the old data-collection system, and new CDC staffers with “appropriate expertise” will be detailed to the task force.

POLITICO spoke with 12 current and former administration officials, as well as hospital systems, IT experts and state officials involved in the coronavirus data-tracking process.

Within the administration, the move to shift data management away from CDC has been portrayed as a necessary, overdue fix. White House coronavirus coordinator Deborah Birx and other senior officials had grown frustrated with data delays that they blamed on the CDC’s system, arguing that it was clunky and inflexible. Among their complaints was that the agency’s system hampered their ability to distribute remdesivir, one of the only approved treatments for Covid-19.

After discussions with the CDC across the spring about modernizing its existing system to perform coronavirus-related work, the administration instead contracted with a pair of outside vendors — TeleTracking and Palantir — that officials said were better suited to handle the evolving coronavirus response. An HHS spokesperson said it took three weeks to update the CDC system every time the federal government requested a new category of information from hospitals, compared to three days for the TeleTracking system.

Birx also played a central role in selecting Palantir to help run HHS’ new data system, said three people with knowledge of the decision. She had worked with the data firm, which is funded by Trump ally Peter Thiel, in her prior role with the U.S. international HIV relief program. 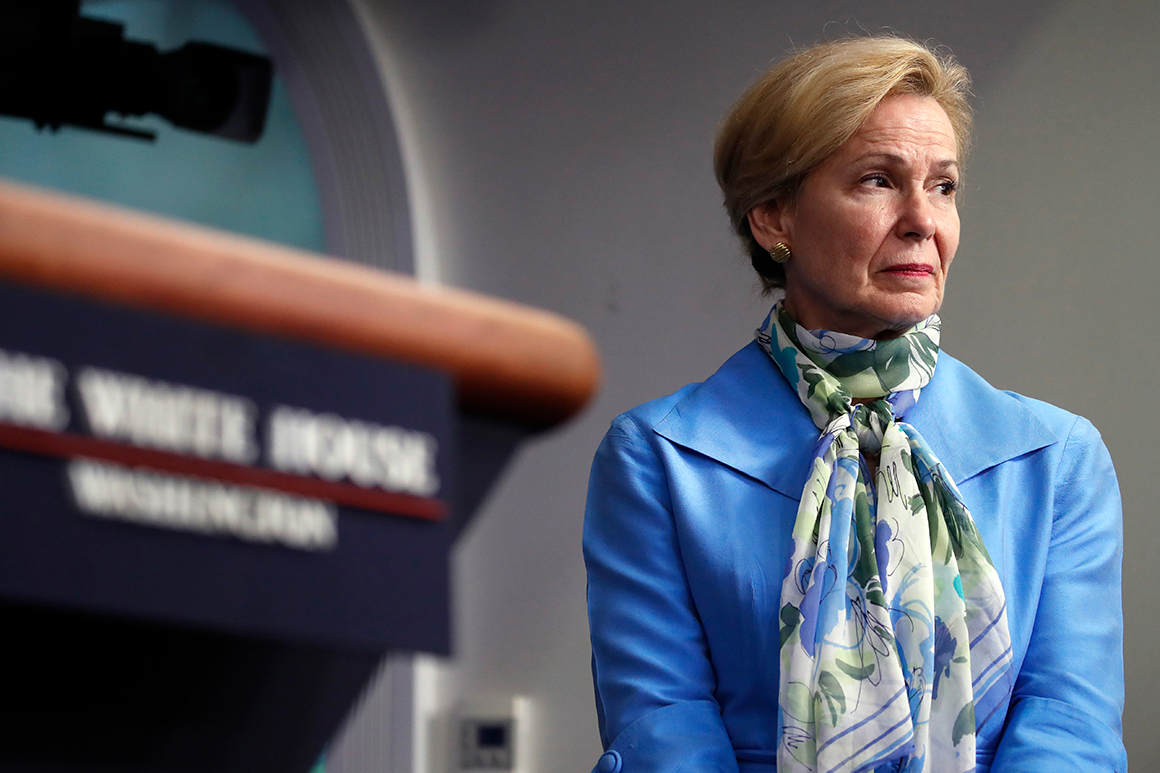 Having brought on the new vendors, HHS in April offered hospitals a choice of where to send their data. But that decision introduced new complications: Instead of reporting to one system, some hospitals were sending data to three different places: their state, CDC and to the TeleTracking portal.

Major hospital lobbies urged a more streamlined approach to collecting data, worrying that confusion over reporting requirements was causing major discrepancies, while top administration officials grappled with the confusion created by the jumble of data systems. In one episode, Birx chastised hospital executives in a private meeting for not reporting enough data. Officials realized later, however, that some of the data had been mistakenly eliminated as the administration pieced information together from the CDC, HHS and states into a single database, according to two people with knowledge of the situation.

In June, meetings to overhaul the data collection began between Birx, HHS officials and the country’s largest hospital lobbies. Others, including for-profit chain HCA, were involved in some discussions.

Within the CDC itself, agency director Robert Redfield and other senior officials conceded that they would not be able to provide the daily data sought by the White House on its urgent schedule, and the agency agreed to halt reporting to the CDC’s system. Administration officials informed hospital lobbies of the change Monday.

“There was no one on the call, including the CDC, that balked at it. So it’s very interesting for me to see what has happened both on Twitter and as well as on other social media,” said one senior executive of a hospital trade group, alluding to outrage from public health groups. Democrats have accused the administration of seeking to subvert the CDC and potentially manipulate coronavirus findings.

“I don't know why the White House is saying they want to hide the numbers, but it makes no sense in terms of fighting this crisis,” Senate Minority Leader Chuck Schumer (D-N.Y.) said on Thursday.

Health officials have rejected the suggestion that the data could be manipulated and insist that CDC will retain full access to all coronavirus data. The CDC’s reporting system, known as the National Healthcare Safety Network, will still be used to track other data besides coronavirus hospitalizations.

The CDC’s defenders said that the agency for years requested money to overhaul its data surveillance systems, but the funding never came. The administration has persistently budgeted about $21 million per year for the NHSN tracking system, which Obama-era CDC official John Auerbach said is not enough.

“That’s blaming the victim. This is the moment you might say, ‘Let’s fix that problem,’” said Auerbach, who is now the president and CEO of Trust for America’s Health.

Meanwhile, health officials have spent months building out the HHS Protect system in hopes of creating a more nimble and comprehensive data collection system that could better guide the federal response.

But the health department never publicly explained why it was creating a new database, which helped fuel anxiety over the administration’s motivations for not being more forthcoming, according to several officials and outside advisers.

“They had a chance to announce this on their own terms, in their own time frame, and they didn’t do it,” said a GOP official familiar with the project, who added that officials had discussed a public rollout roughly a month ago.

It also didn’t help that the reporting change took place shortly after Trump publicly attacked the CDC over its guidance for reopening schools and as White House officials had been discussing whether to review CDC performance. That prompted an unprecedented rebuke from the nation’s public health community and furthered concerns about the coronavirus response getting politicized.

Against that backdrop, a long-germinating and technical shift in the way that hospitals transmit data to the government appeared to be the latest evidence of the CDC being pushed aside.

“I genuinely think this was an attempt to get better reporting,” the GOP official said “This is a mini-example: They’re suffering because of their lack of credibility, and the problem is they had a chance to tell this story – which is not necessarily a bad story – but they didn’t do it.”

Sun & Ski Sports has a large presence all throughout Texas and the Dallas/Fort Worth...

The inspections come as experts say that there's no evidence the virus can spread...

Those held in the No. 4 Training Center are made to work at gravel and sock factories...

A 24-year-old man was arrested Tuesday evening on suspicion of driving under the...

An overview of China EV market

While electric vehicles only accounted for 2.6% of global car sales last year, this...

Factories have made up some of the ground lost in lockdown, as demand for manufactured...

Air District Asks Employers To Extend Work From Home With...

The federal government is looking into intelligence suggesting Kim is in "grave...