The difference between them is paper-thin: Brumbies and Reds, Reds and Brumbies. Over the seven games so far in Super Rugby AU 2021, the Reds have scored only three more points, and conceded five fewer. The Brumbies have scored three more tries than the Queenslanders, and two more than the Reds in their head-to-head contests. […] 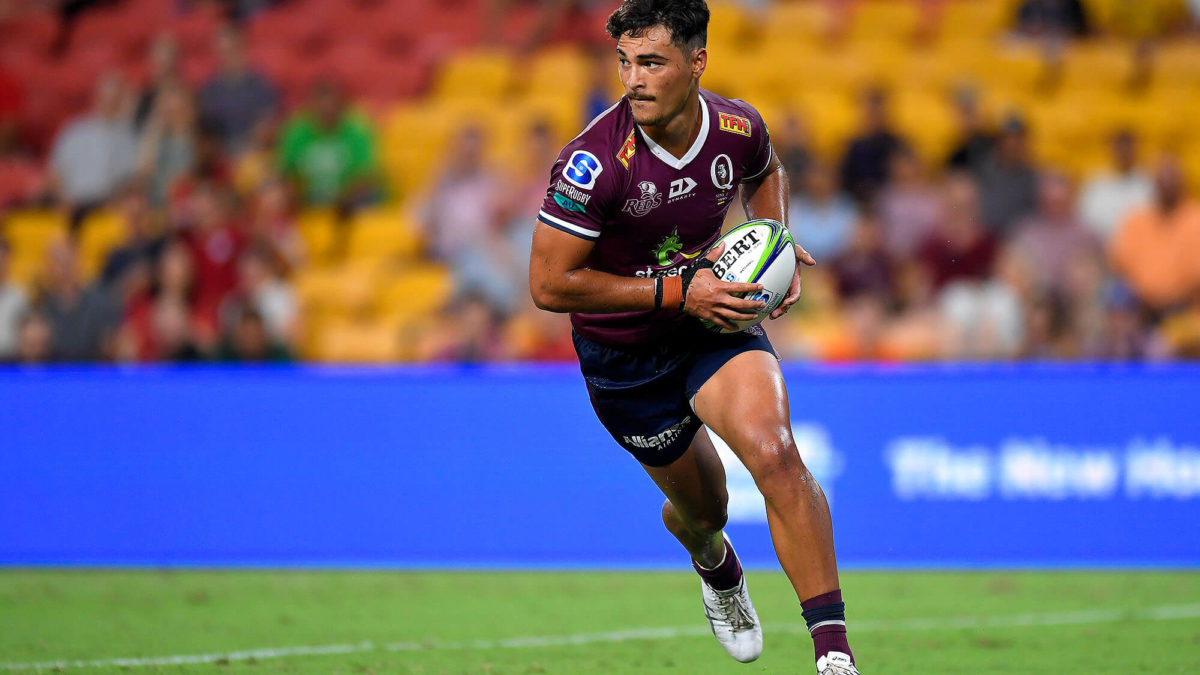 The difference between them is paper-thin: Brumbies and Reds, Reds and Brumbies. Over the seven games so far in Super Rugby AU 2021, the Reds have scored only three more points, and conceded five fewer.

The Brumbies have scored three more tries than the Queenslanders, and two more than the Reds in their head-to-head contests. They are running neck and neck.

The tightness of the competition harks back to a more general truth about modern sport at the highest level. When Sir Dave Brailsford became the performance director of British Cycling, he introduced the theory of marginal gains, which insisted that a mere one per cent improvement in multiple areas would result in a much more dramatic advance overall.

“The whole principle came from the idea that if you broke down everything you could think of that goes into riding a bike, and then improve it by one per cent, you will get a significant increase when you put them all together,” he said in 2012.

When Brailsford first started work, the reputation of British cycling was so bad that top bike manufacturers refused to sell their gear to British riders, for fear that it would hurt their commercial sales.

Five years later, the British cycling team won 60 per cent of the available gold medals at the 2008 Olympics in Beijing.

In the top provincial and international games of rugby, the big outcomes seldom happen in a way that is unconnected to the smaller, barely visible events which went before them. In reality, they represent the sum of the one-percenters.

Likewise, weaknesses seldom look like more than a tiny leak at the start. It is the task of a gameplan is to keep digging them out until they become first a steady drip, then a gush, and finally a raging torrent that cannot be stopped.

The Queensland Reds succeeded in making the marginal gains count in two important areas in their match against the Brumbies in Brisbane on Saturday evening. One of those areas involved a significant step for Jordan Petaia.

But first, the scrum. With six active Wallabies shared among the two front rows, you would expect a roughly even contest. Among all of that green and gold royalty, there was one small but significant weakness that the Reds were able to identify and pull apart over the course of the game.

In an early issue of Coach’s Corner, I identified how important the hooker is to the impetus of a modern scrum. It is no longer about the battle between one prop and his opposite number mano a mano, more often it is about the relative scrummaging strength of the hookers. That is the difference-maker.

The Reds started one of the two top scrumming hookers in Australia in the shape of Brandon Paenga-Amosa. At the very first set-piece (and with the priceless benefit of spider-cam), a small leak appeared in the middle of the Brumbies scrum:

The ball is played away from the set-piece and there is no penalty given or even any ground conceded by the Brumbies front-row. However, a split has already developed between hooker Folau Fainga’a and his tighthead prop and captain, Allan Alaalatoa: Whenever you see a hooker struggling to maintain the bind with his right arm, it means he is feeling the pressure, and that spearhead of pressure has Paenga-Amosa at its tip. The two Queensland props are doing little more than tucking in underneath him in support.

The leak dripped a penalty at the first Queensland feed of the game:

It is also worth noting how the Queensland scrum has abandoned the walk-around technique observed earlier in the season. Since then, loosehead props Dane Zander and Harry Hoopert have disappeared from the picture, with Feao Fotuaika and Richie Asiata preferred against the Brumbies, and Paenga-Amosa returned to his rightful position as the starting rake.

With Fainga’a again struggling to maintain or regrip his right-arm bind on Alaalatoa, the Reds jolt forward with a second shove and Fainga’a disappears beneath the waves. The scrum is moving forward on both sides, as opposed to rotating around one corner.

The drip became a gush only eight minutes later:

Fainga’a folds under the pressure from Paenga-Amosa and becomes completely disengaged from his tighthead prop: 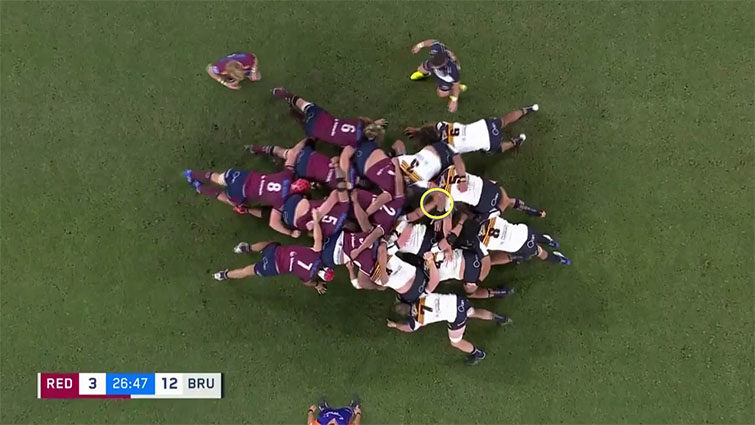 All Fotuaika has to do is follow the big chief right through the middle of the tunnel.

When the Reds eventually decided to wheel the set-piece at the end of the first period, they had already established Nic Berry’s perceptions at the scrum and were rewarded with a penalty.

The big event arrived in the 76th minute with the game on the line, and it was here that all the one-percenters impacted the referee’s decision-making process:

With Paenga-Amosa off the field and replaced by Alex Mafi, Taniela Tupou takes a calculated risk by turning in on a sharp angle towards Lachlan Lonergan, the replacement Brumbies hooker. He has done his sums correctly and the referee does what he has learnt to do in the course of the match, which is penalise the men from Canberra. The small gains reach a tipping point, and the three points from the scrum penalty won Queensland the match.

The second aspect of the marginal gains theory related to the rebuild of Jordan Petaia on the right wing. Petaia has had to absorb a lot of criticism recently, due mostly to the unrealistic level of expectation surrounding his rapid rise in the Wallabies.

The manner of his performance at Suncorp Stadium on Saturday bodes very well for the future of Australian rugby. He took the sensible path back to form, getting the ‘invisible’ details of his performance spot on, starting with defence.

The Brumbies had profited greatly from the presence of their back-rowers in the wide channels on attack in the first game. With a defender of Petaia’s speed and physical presence on the wing, they got no change out of play down the Queensland right-hand side:

First Rob Valetini then Pete Samu are unceremoniously stopped in their tracks down the tramlines. The stop on Samu leaves an especially powerful impression, because ‘Pistol Pete’ is handed just the scenario he loves the most – finishing a break with a one-on-one against a back in plenty of space.

Jordan Petaia made those marginal gains in all aspects of his defensive work. When Jock Campbell missed the ball after a short kick close to his goal-line, Petaia was on hand to pick up the pieces and save the situation: 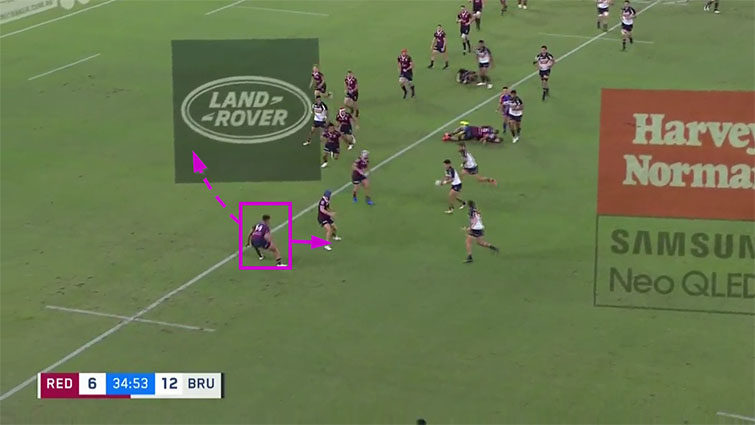 The good work starts with an excellent read, anticipating the kick before it is made. Petaia is in position A1, equally ready to move out with the attacker outside Noah Lolesio, or cover the grubber in behind.

The small gains on defence kept on flowing in a steady stream:

Petaia times the hit from a defensive scrum just right on Len Ikitau, and there is a little bounce and a skip in his step afterwards. The body language was all positive as his confidence returned.

The gains accumulated to the point where a big event was duly triggered in the 63rd minute of the game. When it came, it was a double serving:

First, Petaia shows his quality as an acting fullback with a long, raking, diagonal kick rolling into touch deep within the Brumbies 22. The 50:22 wins back the lineout throw for Queensland.

Then, he Petaia hints at an Israel Folau-like ability in the air, hanging above Tom Banks to regather a speculative lob from James O’Connor’s boot. He runs the perfect L-shaped line to get there, closing from a position on Banks’ blindside and well away from the would-be blockers: 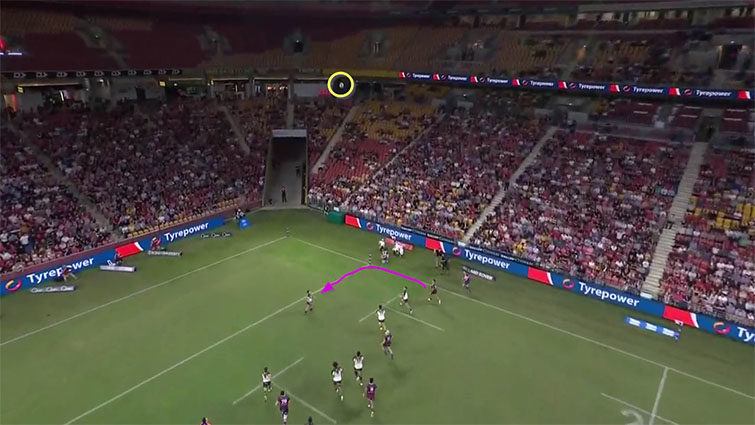 Summary
In terms of pure talent level, there can be no higher praise than to compare Jordan Petaia with Israel Folau. The two are of comparable physique and athletic ability.

But Petaia has a deep root in the game which Folau – as a three-code collision sports athlete – perhaps never truly understood. Petaia is rugby union through and through, and he understands the need to work hard at the small details of his game in order to make incremental improvements.

It was that attention to the one-percenters which paid out the ultimate dividend in his performance against the Brumbies. Petaia defended well and dominated the wide channels which had proved so costly for the Reds in Canberra. He read the play ahead of time, he kicked to the corner at a critical moment and he evaded the Brumbies blockers – who had proven such a nuisance on kick-chase throughout the game – for his try. It was a complete performance, built from humble beginnings.

The other area in which marginal gains reached a tipping point was at scrum time. At the set-piece, the Queensland ace in the hole was their hooker, Brandon Paenga-Amosa. The Brumbies simply had no answer to his power in the gap between Folau Fainga’a and Allan Alaalatoa, and the game-winning penalty was the outcome of his influence earlier in the game – even if he was not on the field when it was awarded.

There is nothing to choose between the two premier sides in Australia as the knockout stages approach. The Reds may have learnt how to beat the Brumbies, but they still have to prove they are ready to win a championship. That is a story for another day, when the tale will start from scratch.

Nationalisation of foreign-born rugby players vs the selection...

How concerned should Australian rugby be about the Brumbies...