New design lets wheels ascend hills too steep for regular robots and paddle through loose soils without getting stuck. 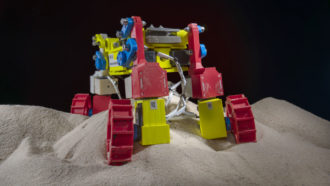 A truly all-terrain rover on the moon or Mars may need to put a little wiggle in its walk.

Wheeled rovers can have trouble crossing soft soil. That’s especially true with the types that cover large swaths of the moon and Mars. NASA’s Spirit rover, for example, met its end after getting stuck in a sand trap on Mars in 2009. But a new rover design could spare future robotic explorers that fate.

The new model can move its four wheels up and down and sweep them back and forth. Scientists tested a mini, plastic version of it. In the lab, this rover wiggled its wheels in different ways. Some spun and others swept side to side. This allowed the vehicle to trundle up hills of loose grains. Those same hills would stop a simple wheeled bot in its tracks, its designers note.

Physicist Daniel Goldman works at Georgia Tech in Atlanta. He and his colleagues tested the mini rover in a tilted bed of poppy seeds. Those seed piles were meant to roughly mimic lunar soil. Just spinning the wheels on even a shallow incline caused the vehicle to sink into the seeds. In no time it was stuck. Then, the team spun the wheels and swept them backward in a paddling motion. The combined motions allowed the rover to scoot forward — at least for shallow slopes.

But the team wanted the rover to reliably climb hills with steeper inclines (more than about 15 degrees from horizontal). To do that, the rover had to switch up its strategy. The vehicle spun its two front wheels to shove under its belly the seeds that had been ahead of it. This effectively lowered the hill’s slope. Meanwhile, the rover’s back wheels paddled from side to side. Those wheels kicked seeds from underneath the rover and sent them behind it. This allowed the vehicle to slowly trudge uphill.

Future rovers could be based on this design. That might allow them to traverse slopes of soft lunar soil near the moon’s poles. There they could check the soil for resources like water ice or explore other similar areas.

Ask Ethan: What In The Universe Is A Fast Radio Burst?

Landlords received just 18.2% of commercial rent due on 24th June

Explainer: What are Antibodies?

Explainer: What are logarithms and exponents?

Let’s learn about the Arctic

5 Harmful But Untrue Myths About The Novel Coronavirus