There’s Norway that Real Madrid can … The post Will Real Madrid sacrifice Odegaard for Haaland? appeared first on Football365.

Watching Real Madrid dismantle Liverpool in the Champions League on Wednesday night, it was hard to ignore the seemingly immortal nature of Los Blancos’ masterful midfield.

Casemiro, Luka Modric and Toni Kroos have a combined age of 95, but the trio picked apart the Premier League champions with such ease it felt like a throwback to Zinedine Zidane’s first spell as coach, when the club won three successive Champions League titles with that trio in every starting XI.

The pre-match narrative focused on the lack of legs in the hosts’ midfield, and how Jurgen Klopp’s introduction of the energetic Naby Keita would target this apparent sluggishness. But this, Madrid’s first quarter-final appearance since they won the competition three years ago, was perhaps the most complete performance of Zidane’s second stint in charge, and the midfield were at the heart of everything good.

Kroos’ passing was exquisite, Casemiro was a rock at the base of midfield and Modric – the oldest member of the Madrid squad – capped off a classy display with an assist for Real’s third of the night. The Croatian proved why he deserves a contract extension of at least one year.

For Martin Odegaard, that will no doubt be a concern. Aged 23, the once-teenage sensation would have expected to be establishing himself in Madrid’s first team by now, having been at the club for over six years. The reality is far removed. Dispatched on an odyssey of loans, the Norwegian has made only eight appearances for Real Madrid, starting just three times. 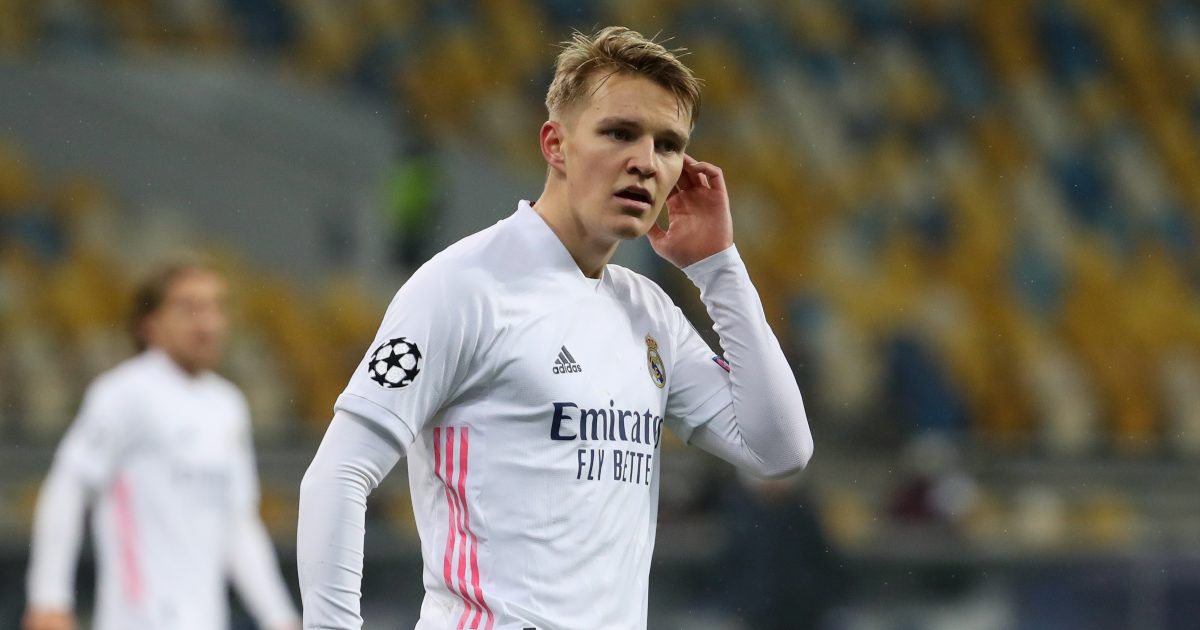 All of those starts came earlier this season, with Odegaard having been recalled from Real Sociedad following an impressive 2019/20 season. It is understood that he sees his long-term future in Madrid, but fears his relationship with Zidane is stymying his progress at the club.

Odegaard has , whose favoured 4-3-3 formation offers no obvious starting berth for the No.10. Out of favour and struggling for minutes, Odegaard submitted a loan request in January; he had to find somewhere to showcase his talents.

Following a brief acclimatisation period, his performances in north London have left Arsenal fans clamouring for a permanent deal. After netting a scorcher in the Europa League against Olympiakos, Odegaard was on target in the win over rivals Tottenham Hotspur before producing his most memorable Arsenal display to date in a week later.

Creating four chances, the 23-year-old was outstanding that day. It felt as though he had finally found his feet in the capital, having only demonstrated glimpses of his talent in the weeks before.

The Norwegian has two years left on his contract in Madrid, and it is understood there have been no official discussions between Arsenal and Real regarding a permanent move. Mikel Arteta hailed his performance against West Ham as “incredible” but admits the decision is ultimately in Real’s hands.

“At the end of the season we will sit together and decide where we can take that relationship forward. At the moment it doesn’t just depend on us,” .

With the Spanish champions in €901million of debt, the situation in Madrid is complicated to say the least.

This summer had long been earmarked as the year they would make their move on a new Galactico – an Erling Haaland or a Kylian Mbappé.

But with Covid-19 restrictions slashing match-day revenue streams, the club are short of cash. Adidas and Fly Emirates, the kit manufacturer and shirt sponsor, also declared earlier this season that they would be unable to fulfil their contractual payments to the club, who continue to commit funds towards the renovation of the Bernabéu.

Despite offloading Achraf Hakimi and Sergio Reguilón, Madrid were forced to shelve their recruitment plans last summer, with not a single player being signed. The top brass may well be intent on splashing the cash this time around, but finances decree that they will have to sell first. The question is whether Odegaard, a precocious talent a few years away from his prime, is dispensable.

Modric, who plays in a similar position to Odegaard, continues to perform, but his qualities are not eternal. Isco, another creative midfielder, is said to be itching for a move away from the club after being marginalised by Zidane. And although 19-year-old Sergio Arribas has caught the eye on a number of occasions as a No.10 for the youth team, he remains unproven in professional football.

Doors could well open for Odegaard at Real; it’s whether he’s prepared to wait.

The 23-year-old’s dream is to star in a trophy-winning side at the Bernabéu, but judging by his desire to go out on loan and accrue as much experience as possible, you get the sense he isn’t someone who likes to hang around.

He will be frustrated by Zidane’s presence at the club, which remains a significant roadblock. His side have upped their game in recent weeks, narrowing the gap between them and league leaders Atlético Madrid to just three points. Their emphatic performance against Liverpool would suggest a tilt at European glory isn’t out of the equation, either.

Zidane did, however, hint at a potential departure recently. Speaking to Sky Italia after the Liverpool win, he refused to rule out the possibility of returning to his former club, Juventus, with pressure mounting on the current boss, Andrea Pirlo.

He said: “Italy is always in my heart. Juve has always been important to me. I don’t know. For now I’m here. Let’s see.”

Such is the need for long-term structure in modern football, the hierarchy will no doubt have plans in place for life post-Zidane, and you can easily see Odegaard at the heart of them. Fellow Norway international Haaland, Real’s primary target, is reported to have made clear his desire to feature alongside his countryman at club level, and the prospect of those two linking up for Los Blancos is a tantalising one.

Haaland’s arrival, though, could hinge on Odegaard’s departure. Any club looking to activate the midfielder’s release clause would have to pay around £301million, and although Real will likely be willing to negotiate a lower fee, there is significant value in a player with his whole career ahead of him. Any cash generated from that transfer would go a long way to securing the signature of Haaland, who would command a fee of at least £100million.

Real Madrid may decide that they only have room for one precocious Norwegian; if it’s a straight fight, then Odegaard will be looking for a more permanent home this summer. But with Zidane’s future far from certain, he might yet outlast the Frenchman and flourish. Club and player have decisions to make.

The post Will Real Madrid sacrifice Odegaard for Haaland? appeared first on Football365.

Burnley 1-2 Newcastle: ASM to the rescue for Bruce